Why is Keppeler KS-V so expensive?

December 14 2012
8
Sniper rifles this is exactly that class weapons, which most clearly shows how important the quality and reasonableness of the design. This is especially noticeable in those models that use manual reloading with a longitudinal sliding gate. It would seem that nothing difficult to make such a weapon, no. The barrel, the trigger mechanism, the shutter and the base on which all this can be installed - take it and do it. However, the difference in the price of a weapon of almost identical design can be very large, and some samples are generally record breakers in value, and this is despite the fact that there are no precious metals or stones in the weapon, and everything is rather modest and simply. Let's try to figure out exactly what people are ready to lay out huge sums of money, as well as how a weapon that has absolutely nothing supernova and unique in its design gains price.

Probably the most striking example of how simplicity can cost huge sums is the Keppeler KS-V sniper rifle. In appearance, this is the most common rifle with a sliding bolt, but there are some special features in its appearance. The first thing that catches the eye is that the weapon store is located not in front of the handle, as in the classic layout, and not behind the handle to hold the weapon, but immediately above it on the left side, tilted at an angle. Thus, the manufacturer managed to simultaneously reduce the overall length of the weapon, while maintaining the normal length of the rifle barrel, and also to deprive the weapon of the main drawback of the bullpup layout in sniper rifles with manual reload with a longitudinal slide gate, namely the most convenient positioning handle for reloading. Thus, according to the manufacturers, the maximum speed of reloading the weapon is reached, as well as the speed of replacing the magazine if necessary. In my opinion, this is rather a matter of habit, the main thing is that with all these manipulations with the weapon one should not have to twist one's hands in attempts to reload the rifle, as it happens with most models in the bullpup layout. 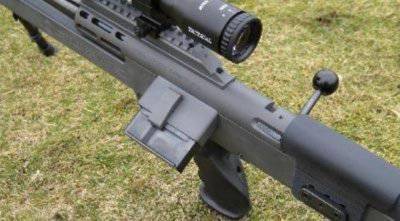 It is noteworthy that the weapon’s full minimum controls, the Keppeler KS-V rifle does not have any safety devices. The trigger and handle of the longitudinally sliding shutter constitute the whole variety of controls in a given weapon. The rifle bolt itself has a stowed position in which the handle turns upward with the bolt slightly retracted. With this shutter position it is impossible to make a shot, but at the same time it’s impossible to say that this opportunity acts as a fuse, since the main task is to reduce the size of the weapon’s width, and not to protect it from an accidental shot. By the way, there is no reliable fixation of the bolt in such a position, which is not at all pleasing at the price of a weapon, when other manufacturers have implemented it in cheaper models, however, it is not that critical.

An interesting feature of the weapon is that it has the ability to install bipods, both under the barrel of the weapon and above it, while the barrel itself does not touch them and remains freely hung. The bipods themselves are folding and adjustable in height. In addition to a pair of "legs" in the front of the weapon, there is also a third one under the butt, which is also height adjustable, which greatly facilitates the sniper’s control of the territory for a long time, since it will not be necessary to hold the weapon.

Butt rifle does not add up due to the layout of the weapon. However, it has the ability to be adjusted both in its length and the height of the cheek support. Adjustment in both cases is carried out with the help of ordinary bolts. Interestingly, the adjustment for the height of the cheek support was made quite comfortable and it can easily be carried out without detaching the weapon, while the butt adjustment was made less convenient. Instead of installing a similar plastic wheel for adjustment, we restricted ourselves to a flip handle passing through the regulator itself. It is not very convenient to use it, but on the other hand, such a weapon usually has only one owner, and frequent adjustment is not required, and with such a design it will be very difficult to knock down the adjustment. Although adjusting the butt is not such an exact procedure, so reinsured with it in vain, if, of course, the true reasons were precisely to keep the butt setting for a long time, but I do not see the others.

Optical sights, bipods and other devices are mounted on picatinny type seats. There are three of them: two on top and one on the bottom of the weapon. So, it was decided to abandon one continuous strap attachment top to reduce the weight of the rifle. It is interesting that for reducing the weight of the rifle are widely used individual parts, which are made of pressed aluminum powder. Since this material is quite fragile, it is not the most common, especially in the samples of weapons of the upper price category. However, the designers managed to mark the elements of this material in such a way that even when the rifle falls, they do not experience any load, which means they will remain intact. At least, the designers themselves say that, and there are no people who want to check it with a weapon, the cost of which starts from 5 thousand euros, and the Keppeler KS-V rifles themselves are not so much.

In addition to the version of weapons intended for the army and police with the designation "Sniper" there is also a hunting version of this rifle, corresponding to the mark "Hunter". This modification of the weapon differs from the basic version in that the butt in it is actually wooden, lacking the possibility of adjusting the length and height of the cheek support, and there is also no second seat on top of the weapon. Otherwise, it's all the same rifle. The appearance of the hunting version of the rifle personally seems to me somewhat specific, looking at it, there is a feeling that something is missing in it, but this is my personal opinion. This weapon is cheaper, but for hunting it is still quite an expensive tool, which is not available to everyone.

Thus, we can conclude that the appearance of the rifle and its ergonomics do not stand out from the total mass with something supernatural, with the exception of a few decisions that clearly do not pull on the amount requested for weapons. The device of the weapon is also quite simple and elementary, it is really difficult to surprise with something in the “bolt” rifle. So, the bolt itself locks the bore of the rifle on the 8 stops, grappling with the breech, and not with the receiver, as written in many sources. Coupling with the barrel itself makes it possible to reduce the force interacting on the receiver when fired, and therefore make it easier, however, this is not an innovation and this solution has been used for a very long time. The trigger mechanism of the weapon is fully adjustable according to all imaginable and inconceivable parameters, but this is also not the reason for the high cost of the weapon. Thus, we can conclude that there is clearly nothing inside the rifle for which 5 could give thousands of European money without stinging. Quality is, of course, quality, but nonetheless.

In my opinion, the main reason for the high cost of this rifle is that it sells not just a rifle, but a rifle with a set immediately under several variants of ammunition. So, together with the weapon goes immediately a set of barrels and magazines chambered for 7,62x51, .300 Win Mag and .338 Lapua Magnum, for the version of the weapon Sniper. The Hunter variant is completed with two trunks, and accordingly with two magazines for 7,62x51 and .300 Win Mag. Cartridges, hence the difference in almost Euro 1000. Thus, the real cost of a single-barrel rifle is about 3000 euros, which is already more acceptable, especially since the quality of the weapon is really excellent. So even though 3000 is a lot of money, it is already a more realistic amount compared to 5000.

Actually, this is the main secret of this expensive weapon, like many other models. While most manufacturers do not even put an extra screw in the kit, instead of one rifle, you get three for different ammunition at once, and the price is only 1,5 times more than for a weapon similar in its characteristics, but without a set of barrels. Much more interesting is the fact that these sets of barrels are sold together with weapons, and are not separated from the rifle by ushlnymi sellers and not "driven" separately. This is where the rarity of these weapons is taken, since not everyone will stop their gaze on a rifle with such a price tag, and those who are interested in are unlikely to buy weapons at once with a set of barrels for different ammunition, so if one were to over the issue of purchase to think. Thus, the weapon has received a minimal spread, that only we fill it with a price, and a lot of rumors are circulating around the rifle itself, according to which it either targets itself or shoots itself. In fact, this is the most common weapon with a good bundle and excellent quality, for which money is paid, but there is nothing supernatural in the rifle.