The secret of Chinese success

December 14 2012
14
Recent months have been rich in news about chinese aviation industry. With a difference of just a few days, the new CAIC WZ-10 attack helicopter was demonstrated, the Shenyang J-15 fighter first landed on the deck of the Liaoning aircraft carrier, and the first flight of the promising Shenyang J-31 fighter took place. The latter attracted the most attention. The fact is that according to the Chinese classification, the J-31 belongs to the fourth generation. The list of features of the “Chinese” fourth generation is similar to the criteria of the fifth generation fighter used in other countries. Thus, China became the second country in the world to acquire two of its own fifth-generation fighter projects at once. Of course, this fact has become the subject of serious debate on various topics. A variety of opinions were expressed about the J-31 and at the end of November the Chinese themselves decided to take the floor. In the last days of autumn, the Zhongguo gongye bao newspaper published an article that details in some detail the Chinese version of the prerequisites for the current successes in aircraft manufacturing. 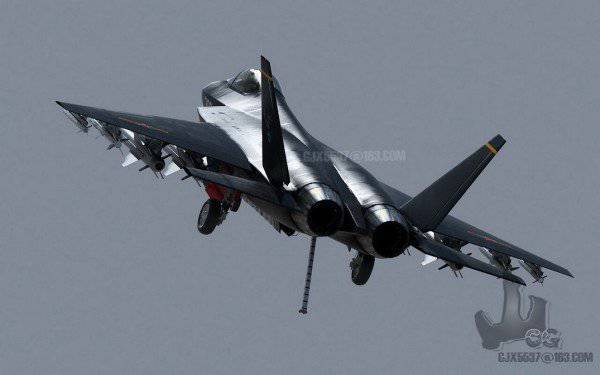 The material begins with general words about the first demonstration of the aircraft and the date of its first flight. In addition, the authors focused on the description of the general aspects of the design of the new J-31. The twin-engined single-seat aircraft, named “Guin” (“Falcon”), has oblique keels in the tail section, however, it is not equipped with the front horizontal tail, which its predecessor J-20 had. It is noteworthy that the characteristic lines of the air intakes of the fighter were given a rather original name: “the shape of the mollusk shells”. Considering the appearance of the car, the Chinese authors cite the words of some unnamed foreign experts, according to which there is every reason to believe that the J-31 has better flight data than the American fighter, Lockheed Martin F-35 Lightning II. In favor of this statement, an argument is made in the form of thinner aircraft shapes and a larger wing span. Unfortunately, the Chinese authors did not bother to indicate in their work any detailed characteristics of the new aircraft.

The lack of specific numbers was due to the fact that the main purpose of the article was not a story about the aircraft itself, but about its development. First of all, it is noted that the main successes in the design of new technology are associated with new technologies used in the design work. Several years ago, all such work was carried out "in 2D format": on paper. Because of this, the preparation of drawing documentation took a lot of time. In addition, with this approach to research and design, we had to spend time agreeing on different parts of the project, for which different groups of employees were responsible. Next, a transition was made to a new form of design, combining old and new methods. During this “transitional period,” the designers of the Shenyang Aircraft Building Corporation prepared drawings in a two-dimensional format using computer-aided design systems. The third stage of the change in design technology was the complete transition to computer-based three-dimensional tools. All this has greatly simplified the workflow, using only electronic drawings and documents.

Of course, the transition to a fully computer-aided design was not easy. All these processes required retraining of personnel and significant changes in the entire system for the development of new technology. However, such costs are more than paid off, allowing you to save a lot of time on the various features of the "paper" design. At the same time as time was saved, the need to develop new work coordination systems emerged. Integrated development systems, in which several designers have the opportunity to work simultaneously on one part, and large groups of engineers can interact in the same way when working on large scales, despite the apparent simplification of the design, in some cases even complicated the work. The question of optimizing the interaction made me start research on solving such problems. However, at first, the chief designers of the project and their assistants had to independently engage in determining the existing problems of integrating various units.

In the course of work on the transfer of the Shenyang Aircraft Corporation to a new design principle, a new software platform was created with the symbol Lean R&D, intended for joint design work and more convenient integration of the design bureau departments. In addition, inspection and quality control capabilities are included in this specially designed system. Chinese journalists consider the time required for the development of new aircraft to be an example of the results of the transition to new methods of designing aircraft. So, at the beginning of the 10s, it took about 15-31 years to develop, test and start mass production of a new aircraft. In the case of the new J-19 fighter, the period from the start of development to the first flight was only XNUMX months. Approximately the same amount of time is planned to be spent on testing and deploying mass production. Thus, the entire creation cycle of "Falcon" will not exceed three to five years. There is a clear benefit from the transition to new systems.

Of particular interest is another fact cited in an article by the Zhongguo gunye bao newspaper. Its authors argue that the creation of an integrated design system Lean R&D, as well as the start of tests of the J-31 fighter, followed by the unloading of personnel from the design bureau of the Shenyang Aircraft Corporation, made it possible to start working on issues related to fifth generation fighters. In this context, the Chinese classification is again applied, so that the new aircraft will correspond to the generally accepted sixth generation. It is quite understandable that no details of the appearance of the new aircraft were given. Obviously, Chinese engineers themselves have no idea about them yet. However, the beginning of work towards the fifth / sixth generation once again demonstrates the Chinese zeal for the development of its aviation industry.

A quick look at Chinese material about new programming technologies evokes strong associations. One gets the impression that the Chinese J-31 fighter is similar to the American F-35 not only in appearance, but also in "origin", namely in design technologies. When creating the F-35 and the previous F-22, all organizations involved in the projects used a single software. Thanks to the use of the CATIA system, several dozen independent firms and organizations could synchronize their actions. It is quite possible that the Chinese Lean R&D system repeats the architecture of the American CATIA software package. Thus, Chinese engineers managed to master advanced design technologies. It is too early to say exactly what consequences the introduction of new software will have, but it is already clear that the Chinese aircraft industry has every chance to accelerate the creation of new technology and catch up with the world leaders in the industry.