About Bandera in the Rada. They need to be reminded who the Ukrainians fought for 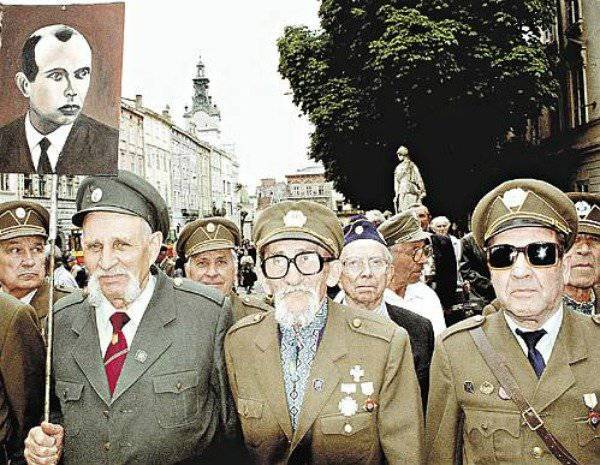 December 12 in Kiev will host the first meeting of the newly elected Verkhovna Rada of the seventh convocation. This national assembly will differ qualitatively from other parliaments that have arisen in the territory of the former USSR over the past twenty years. The best permanent activist of the Bandera movement in Ukraine Bogdan Chervak ​​formulated this best of all: “Yevgeny Konovalets, Andrei Melnik, Stepan Bandera, Roman Shukhevych, Oleg Olzhich, Elena Teliga will invisibly be present in the Ukrainian parliament together with the nationalist deputies.” In other words, the ideologists and practitioners of the most ferocious, misanthropic ideology will tangibly soar in the new Ukrainian parliament.

As it is known, neo-Nazis from the Freedom party got 37 from 450 seats in the Rada of the new convocation (of which 25 seats are on party lists and 12 on majority districts). This is the largest parliamentary victory for neo-Nazis in post-war Europe. We are talking about direct followers of the most terrible executioners of the recent past, flaunting Nazi symbols and inciting hatred and bloodshed. Not a single European country was able to fascist revanchists to arrange such a successful breakthrough into power.

Last Saturday, the Freedom congress took place, the head of which was unanimously elected its leader, Oleg Tyagnibok. What is characteristic: there were no other candidates. Among those present stood the former commander of the Ukrainian Navy, Admiral Igor Tenyukh. Having joined this party recently, he gives it the appearance of a solid institution, correcting the ingrained perception of it as a bunch of hooligans headed by electoral buzotter Andrei Michnik. After the election, he, without a bit of embarrassment, told the press about his intention to hold a 1 march in January in honor of the birthday of the criminal and collaborator Bandera.

The leader of Batkovschina, the second largest party in Ukraine, Arseniy Yatsenyuk, took part in the congress. Only three years ago, Yatsenyuk himself was the victim of dirty fascist defamation by the mayor of Uzhgorod Ratushnyak. And now he himself openly proclaims the Nazi criminals as heroes and is proud of his alliance with the Svoboda party: “I am very glad that we managed to reverse the negative tradition of the Ukrainian grumpy political party: we signed an agreement, and none of us departed from the text of the partnership agreement” - he said.

It was precisely this course of events that the Ukrainian anti-fascists feared: a breakthrough of the neo-Nazi core in the “Rada” and the recognition of its legitimacy by moderate forces. This is how someone Hitler came to power, using the weakness of Weimar democracy.

We already see the great companions at the Freedom convention. Not far from Admiral Tenyukh, it was possible to notice well-known lawyer and diplomat Vladimir Vasilenko. This decently dressed man with a higher education ascended to the rostrum and immediately proceeded to russophobic incitement: “to win the war against Russian imperialism ... this anti-Ukrainian power, which is a toy in the hands of the Kremlin”.

The anti-Russian theme prevails among the Bandera revanchists today. Of course, the idea of ​​harassing the “Jews” and their extermination did not fade, and Roman Shukhevych, canonized by “Freedom,” who was directly canonized by “Freedom”, was engaged directly in the war. But in the general stream of hatred of Bandera’s shortages, Russians and Russia account for the vast majority of demonic energy.

It is strange that Russian human rights activists and anti-fascists are silent. Their calls for a boycott of the totalitarian “Freedom”, originally called the “Socially National Party of Ukraine”, are not heard. The passivity of the Russian deputies of the State Duma and members of the Council of Federation is also surprising. Wouldn’t it be appropriate to close the entrance to Russia to all members of the neo-Nazi “Freedom” and its main supporters?

It is noteworthy that concern about the brown epidemic in Ukraine was expressed in the NATO bloc itself. The fame of the Nazi Oleg Tyagniboka went far beyond the borders of Ukraine. The NATO Parliamentary Assembly prepared a draft report on “post-orange Ukraine,” in which Pygnibokov's Freedom was called an “anti-Western, anti-liberal, anti-European, anti-Semitic, but most of all, anti-Russian” party. It also stresses that the emergence of such a party in a politically unstable Ukraine is extremely dangerous.

If recently the US State Department and its European allies turned a blind eye to the glorification of Nazi criminals and the oppression of Russians in Ukraine and the Baltic States, the current brown breakthrough in Kiev made Western leaders think about the possible consequences of extreme Russophobia. They put up with a brown tint, but the thick brown paint in Ukraine seemed to them too saturated.

It is safe to say that the Tyagnibok National Socialists can be stopped with the help of a joint Russian and international action. We are obliged to remind Ukrainians and the whole world that six million sons of Ukraine fought in the ranks of the Soviet army in the fields of World War II and another half a million went into partisans. In the ranks of Bandera’s traitors of various stripes, we count no more than three hundred thousand goals. Such is historical true.

It is a pity that the laws prohibiting neo-Nazi activities, following the example of many European countries, were not adopted in Ukraine on time. However, it is not too late.