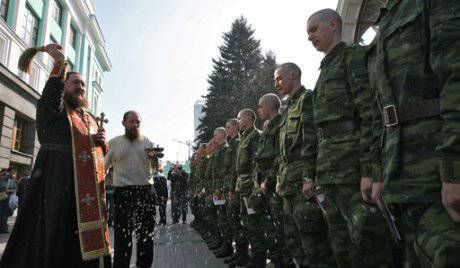 The Russian Armed Forces are not waiting for the usual replenishment. The leadership of the Ministry of Defense decided to increase the staff of military priests in the army and navy.

The fact that the institute of chaplains will be revived in the Russian army over time, said Defense Minister Sergei Shoigu.

At the same time, he recalled that Russia is a multi-confessional country. At present, 243 has established full-time positions in the army and navy for the posts of assistant commanders for working with military believers.

They say: “there are no atheists in the war”, but in peacetime soldiers and officers have many experiences that cannot be shared with everyone. And the expansion of the institute of military clergy in the Russian army today is a completely natural step, convinced the expert of the Institute for the Study of Religions of the RSUH, religious scholar Alexei Yudin:

“There is a tendency towards some kind of new religious tone in society. So, in principle, this measure meets domestic needs. Imagine the armed forces as a ghetto in which there are no religious organizations and communities, it is almost impossible. All the more so now experts talk about the growing role of religion in society. "

The participation of chaplains in the lives of military personnel is unlikely to be limited exclusively to prayers and worship services. In modern conditions, a military priest is not only a confessor, but also an educator for a soldier, said Pavel Salin, a leading expert at the Center for Political Studies in Russia:

"Such a need has matured, because the military priests will replace another institute that effectively acted in wartime, and now it has actually collapsed - the institute of officers for educational work."

As for possible interfaith conflicts, then, according to Pavel Salin, the number of religious incidents should decrease with the appearance of chaplains in the troops:

"I don’t see the prerequisites for inter-religious conflict, because these priests, no matter what religion, are called upon to smooth out conflict angles that are more in the youth than in the mature population."

At the same time, religious scholar Alexei Yudin notes, it is important not to allow radical religious views to penetrate into the armed forces:

"On the one hand, religion is expected in the armed forces as a pacifying factor (they say that religion will help relieve national tensions). On the other hand, some experts notice the presence of radical Islam in the ranks of the armed forces."

Today there are many discussions about the growth of clericalism in Russia. It cannot be ruled out that the expansion of the activity of chaplains will cause many protests. Only here it is important not to forget that the military clergy is not a propaganda tool, but a helping hand to the military.