Ukrainian-Russian Union - what is America afraid of? 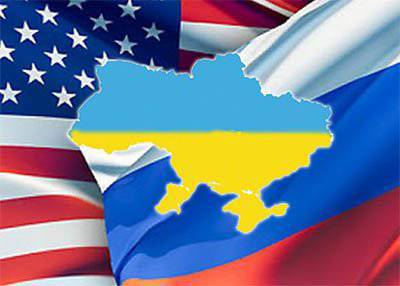 About two decades ago, the world got the idea that all the most important issues and problems of world politics are solved only with the permission and with the direct participation of the United States of America. It is clear that there is no smoke without fire, and such confidence did not arise by chance, because after the collapse of the Soviet Union, the United States remained the only superpower in the world community.

When the European continent was just beginning its path to development, and China was not yet as powerful a state as it is at the moment, the US currency was the only reserve currency in the world. And if the US government decided that any state “behaves” itself incorrectly, then it was doomed, despite the positions of the rest of the world community, and even more so without taking into account the opinions of the population of the victim state.

The strength and power of America was particularly pronounced in Eastern Europe, as well as throughout the post-Soviet space. And in most cases, the most important in these countries was not at all the official government headed by the president and the head of the cabinet of ministers, but the American ambassador. Otherwise it could not be, because it was not a simple politician, but a representative of the interests of the American government, the undoubted global leader.

What is happening now? According to the former US ambassador to Ukraine, Stephen Peifer, the rapprochement between Ukraine and Russia, instead of European integration, will harm first of all Ukraine itself. This was reported in one of the interviews given immediately after the statement by the Ambassador of Ukraine to the Russian Federation, Vladimir Yelchenko, appeared in the press about the possibility of Ukraine joining the Customs Union, under certain circumstances.

Pifer is sure that most of the Ukrainian population does not want to become part of Russia. He also noted that in some aspects such a union may be unprofitable and not very favorable for Europe, but not critical. Apparently, in the words of the ex-ambassador there is a hint that the main strategic task of the States is to prevent the formation of an independent state strategic education in the post-Soviet space that would be able to pursue an independent policy independent of America. Paul Wolfowitz, who at the time was an advisor to the US president on security issues, spoke about this 20 years ago.

On the one hand, such statements can only be considered the subjective opinion of a single adviser, of which there were many. But on the other hand, all this time, American presidents have listened to the opinions of completely different advisers and assistants. As a result, the foreign policy of the United States of America was aimed at "promoting" the establishment of democracy and economic development in various parts of the world.

At the same time, United States Secretary of State Hillary Clinton also makes assumptions similar to Wolfowitz. According to her, a certain Sovietization of the region has recently been observed. But it will be no longer the USSR, but the Customs Union, or the union of the states of Eurasia. Clinton is confident that such a union is unprofitable for America, so Washington will do everything possible to slow down the process or prevent its implementation altogether. It is noteworthy that the US Secretary of State made a similar statement shortly before the meeting with S. Lavrov. Moreover, it was made on the same day when the “Magnitsky Act” was ratified.

In addition, Hillary Clinton noted that violations of the principles of democracy and human rights are increasingly occurring in Russia, and exactly the same thing happens in most countries of the former Soviet Union. According to her, the progress that America was counting on after the collapse of the Union is not, and it is not easy to resist.

Clinton has commented on all statements by the Russian political leadership, in particular, the press secretary of the head of state, D. Peskov. According to him, all the judgments of the American politician regarding integration are erroneous. According to him, the situation that is currently observed on the territory of the former USSR is a new type of integration based on economic convergence and interaction, and nothing more.

In addition, V.Putin also repeatedly stated that the development of relations in the Eurasian space does not imply the restoration of the Soviet Union.

There is no doubt that the restoration of even a semblance of the USSR is possible. However, judging by Clinton’s statement, America opposes any attempts at integration in the post-Soviet space. From this we can make a definite conclusion that in Russia such statements will be perceived extremely negatively. According to the chairman of the State Duma Committee A.Pushkov, with such statements the Americans can only achieve even greater tension in the relationship. In addition, he stated that neither the creation of the Customs Union, nor the Eurasian Union, is in the competence of the American foreign policy department. It is about creating an economic union that will not threaten anyone. Similar formations exist in Africa, and in Europe, and in Asia. Therefore, the isolation of the Eurasian Union as a potential adversary with which America intends to fight can be viewed as hostile towards Russia. Thus, we no longer have to talk about the reset policy, and the confrontational tone of the American government can be viewed as some kind of ultimatum to Russia.

Therefore, according to Pushkov, the Russian government will be forced to reconsider the prospects for cooperation with the United States of America in precisely those areas that are of particular importance to Washington.

Undoubtedly, in this situation, much depends on the subjectivity of perception. So, for example, the American ex-ambassador is not sure that Ukraine wants to become part of Russia. But this is not about this. The Customs Union is, first of all, closer cooperation in the economic sphere.

At the same time, according to a survey conducted jointly by the Russian research organization Levada Center and KIIS (Kiev International Institute of Sociology), the percentage of Ukrainians who are good to Russia has slightly decreased. And if at the beginning of the year these were 86 percent, now their 83 percent. It is not surprising that the majority of Ukrainians who are positive towards the neighboring state live in the southern and eastern regions (91 and 90 percent, respectively). Least of all maintain relations with Russia in the western region (about 63 percent of residents). In the central regions, this figure is about 87 percent.

At the same time, as far as the Russian population is concerned, over the course of the year, its attitude towards Ukrainians has significantly improved. So, at present, the percentage of Russians positively disposed towards Ukraine and Ukrainians is 74 percent (versus 64 percent at the beginning of the year). But after all, a bad or good attitude is far from important, there are much more important categories.

So, in particular, both the Ukrainian and the Russian population for the most part want both states to be independent, but at the same time maintain friendly relations and open borders, without customs barriers and visas. In Ukraine, about 72 percent of the population supports this view, in Russia - about 60 percent. At the same time, in Ukraine this number has increased by three percent lately, in Russia it has remained almost unchanged. At the same time, in Russia the number of those who would like the relations between the two states to be more isolated decreased by about 6 percent (from 20 to 14 percent); in Ukraine, this figure is less significant (it decreased from 13 to 11 percent) .

Thus, it is obvious that the population of both states wants closer relations between the two countries, and the political leadership should not ignore such a desire.

But in this case, the question arises: who then is not profitable rapprochement between Ukraine and Russia? The answer can be only one. The US Department, in particular, its foreign office, "is in error" regarding the fact that the will of the majority of residents of the Ukrainian and Russian states does not coincide with the long-term interests of Washington ...

The Customs Union is one of the stages of economic integration, which allows to minimize the barriers that hinder the growth of trade between states. And in a crisis of world economic model, only regional economic integration is the only way out for many states. But does this suit America?

It is obvious that the US government has seen a real strong competitor in the Customs Union, so it will make many attempts to hinder its activities.