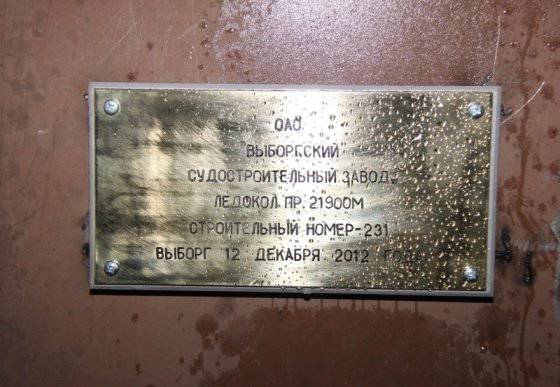 12 December 2012 of the year, ahead of the schedule, a solemn ceremony was held to lay the linear diesel-electric icebreaker of the 21900 project M. The ship is being built by order of the Federal Agency of Maritime and River Transport.
The solemn ceremony was attended by representatives of USC OJSC, the Federal Agency of Maritime and River Transport, FSUE "Rosmorport", FAA "RMRS". By tradition, a mortgage board was installed on the inset section of the vessel. The ceremony of laying the icebreaker ended with the solemn launch of a unique press for bending sheet metal. The press develops an effort up to 1000 tons and is capable of bending sheet metal parts with a thickness of 50 mm and more.

“Before this, the plant had the opportunity to bend parts with a thickness up to 20 mm, and the maximum force was equal to 450 tons. With the reorientation of the company to the construction of icebreakers, where the thickness of the outer skin reaches 40-50 mm, the plant is faced with the problem of bending such parts. Thanks to the commissioning of this press, the Vyborg Shipyard will be able to work with a sheet of metal of the required thickness, ”commented Alexander Solovyov, General Director of Vyborg Shipyard OJSC.

The linear diesel-electric icebreaker of the 21900M project will be completed in October of the 2015 year.