Cossacks and the annexation of Turkestan

December 15 2012
72
In 1853, the Russian troops under the command of General Perovsky, after passing 900 miles through waterless terrain, stormed the Kokand fortress Ak-Mosque, which covered all the routes to Central Asia. Three hundred Ural and two hundred Orenburg Cossacks participated in the campaign. The fortress was renamed Fort Perovsky and began construction of the Syr-Darya line, which was supposed to cover the territory from the Aral Sea to the Lower Urals from raids. In 1856, construction of fortifications from Fort Perovsky to Fort Verny begins, to cover 900 versts of the steppe and connect the Syr-Darya line and Siberia, to establish a connection between the Siberian, Ural and Orenburg troops, who now had to protect the territory in 3 500 versts. In 1860, the Kokand troops were trying to capture Verny, but the Siberian and Semirechensk Cossacks beat off the attack. In 1864, Russian troops occupy Shymkent and defeat the Kokands. Kokandians collect the rest of their forces and go on a raid on Russian troops in the fortress of Turkestan, but on the way they come across a hundred Ural Cossacks, Esaul Serov. In the three-day battle of Ikan, the Cossacks beat off the attack of the entire Kokand army. From 110, the Cossacks survived 11, were injured - 47, killed - 52. 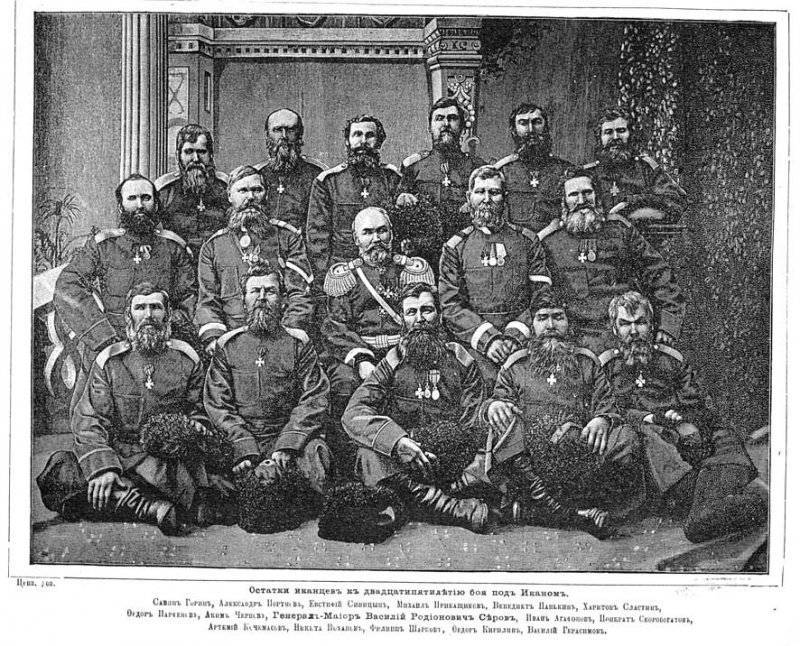 In 1865, Russian troops along with the Ural Cossacks occupy Tashkent. Established Turkestan region. In 1866, hostilities begin against an emir of Bukhara that pretends to Tashkent. Bukhara raid was repelled. In 1868, the Russian troops of General Kaufman, which include the Ural Cossacks, go to Samarkand, and the emir of Bukhara surrenders, recognizes the protectorate of Russia. 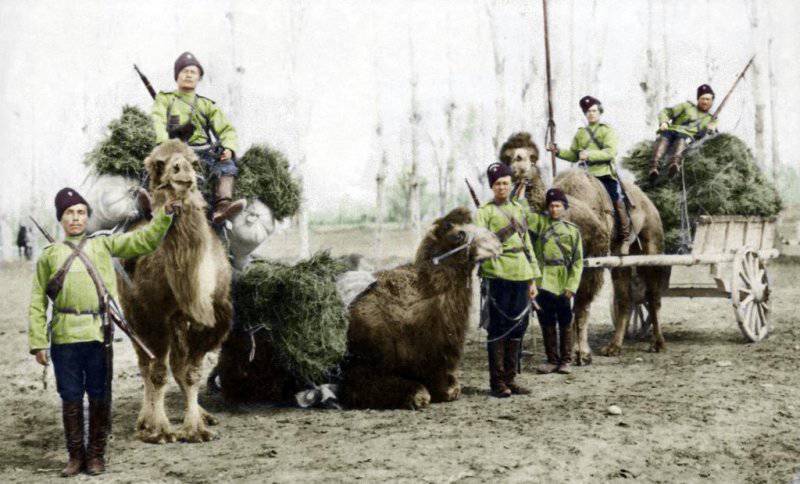 Orenburg Cossacks in the conquest of Turkestan

In 1869, Russian troops from the Transcaucasus land on the eastern shore of the Caspian Sea. In 1873, a campaign is organized on Khiva, the largest center of the slave trade in Central Asia. Through a waterless desert, troops approach Khiva from three sides - from Turkestan, from the Orenburg line and from the Caspian coast. Siberian and Semirechensk Cossacks, 5 of hundreds of Urals, 12 of hundreds of Orenburgs, Kizlyaro-Grebensky and Sunzhensko-Vladikavkaz regiments from Terek and even part of the Yeysk regiment of the Kuban army participate in the campaign. During the campaign, nature itself was defeated. Then, by a two-day assault on 28 and 29 May, Khiva is taken. In 1875, the Orenburg, Ural, Siberian and Semirechensk Cossacks help Russian troops capture Kokand.

Turkestan and the Transcaspian Territory, where Russia's power is becoming stronger, are divided by the Turkmen steppe, whose nomadic population continues to make raids. Before the oasis, where the Turkmen stronghold, Geok-Tepe, stood, there was a desert on the 500 versts. In 1877 and 1879 Russian troops twice unsuccessfully tried to occupy this fortress. In 1880, General Skobelev begins his march on Geok-Tepe from the Caspian coast. Along with him are the 1 th Labinsk, 1 th Poltava and 1 th Taman regiments of the Kuban Cossack army. Towards Skobelev from Turkestan moves detachment of General Kuropatkin, which includes the Orenburg and Ural Cossacks. Under Geok-Tepe squads meet. 23 December 1880 begins the siege of the fortress, 12 January 1881, it is taken by storm. For this battle, the 1 th Tamansky regiment of Kuban was awarded the St. George banner. Thus, the whole of Central Asia was annexed to Russia.