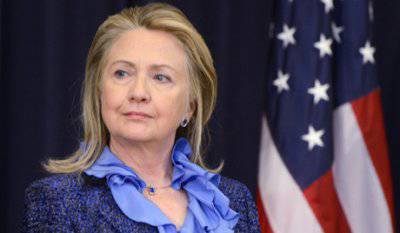 Hillary Clinton, the US secretary of state, will leave her high post in late January. This is on the one hand. On the other hand, the democrats from her home party believe that she may want to become US president in 2016, and that if she answers the party, then she will not think of a better candidate. Well, on the third hand, Hillary herself said more than once that she was tired of politics. And then: half her life passed in politics. She was both a senator and a rather conspicuous wife against the background of other presidents, and a presidential candidate. Will her current state post be the last, or will she have a rest in four years, gain strength - and get out to the presidency?

I would not look so far. Over four years, according to OECD economists, China will break out ahead of the US economy. He is followed closely by India and Indonesia. America will start to fall behind. The rhetoric of the Cold War, which is stuffed with antibiotics like American beef and chicken (yes, the scowling guard Onishchenko sounds the alarm), all the maxims of Mrs. Clinton, will finally go out of style. And in the end, some new Republican will come to power in the USA - moderately smarter than Romney and not as blatant as Mrs. Clinton.

The other day, being in Dublin as part of her 38 tour, she said to the whole world:

It was not about Dublin, but about integration in the post-Soviet space, which in the States is understood very simply: the restoration of the Soviet empire and hence the new major threat to Washington, no less than the Chinese one. Probably, the White House is afraid that comrades Putin and Medvedev, uniting around them Tajik brothers and Kyrgyz brothers, and there other brothers who have nowhere to go, will declare the United States something like jihad. At best, the new USSR will again disappear behind the iron curtain, and at the checkpoint with the inscription "WTO" will post a sign: "Re-register".

Why so threatening, so militant geopolitical rhetoric of Mrs Clinton, who is about to leave the post of Secretary of State? She wants to enter the world history loud statements? Or does she want to cover up with a thick layer of new speeches those uncomfortable remarks that have been imprinted on the tablets earlier - against her will?

Hillary is a big dreamer - came up with the story that her mother Dorothy named her in honor of Everest's conqueror Sir Edmund Hillary. But the trouble is: he became famous five years after being born in 1947, the future story-writer.

Telling the public how she visited the dangerous country of Bosnia in 1996, she replaced the episode with receiving flowers from the girl at the airport with a more exciting rush under sniper shelling.

In order to cling to the heroics of political everyday life and her own child 1980, born, Hillary said that Chelsea Clinton tragically 9 / 11 was doing jogging near the World Trade Center on a tragic morning. But you can't hide anything from the journalists: it quickly became clear that the daughter was sleeping peacefully at home in the crib. However, she could see her dream of jogging near the World Trade Center in a dream.

There are persistent rumors that Hillary lays great on the collar, preferring to drink chilled “Aguila pilsner cerveza” beer straight from the neck - just like brave American marines, among which drunken scandals and rowdy occur almost daily.

“The essence of smart power is smart people!”

We must pay tribute to her, along with this she acknowledged:

"Everyone would like me to sit at home, bake pancakes and serve tea."

Yes, there are few exceptions.

But in a few years of state secretary, Hillary learned many new words. Now she can hit the experts by juggling with terms such as “reset”, “integration” and “re-Sovietization”. Noam Chomsky, as they say, nervously smokes on the sidelines and is preparing to re-take an IQ test.

By the way, almost five years ago, during the pre-election race, she said:

“Even during the Cold War, when the Soviet Union aimed thousands of missiles at us, we did not stop the dialogue, and thus we won. Therefore, one of my priorities, if I become a president, will be to return my position in the world. ”

During the time that Hillary was in the state secretary's office, the “position” in the world to the USA has extremely decreased. In those countries where the Arab Spring was held, Americans somehow hated. Al-Qaida, which embodies the ideals of American democracy in Syria, states that after Damascus, the next item of jihad is Washington, or rather the White House, over which the applicants threaten to raise the black banner of Islam. In Egypt, from time to time they are entertained by the fact that they are attacking the US embassies and burning stars and striped flags. Ambassador K. Stevens and three more Americans were killed in Libya. Iraq’s Prime Minister, Comrade Al-Maliki, recently made it clear to America that his country is not someone’s patrimony. Finally, even in Russia, they were so emboldened that they forced NGOs — well-known Moscow agents of overseas ideas — to register themselves as “foreign agents”.

“Location” to America can only be felt in Qatar, where 1,6 lives millions of fat people.

True, it should be noted that in 2008, the president was not Hillary. The leader of the American people became and spent four years Barack Obama. However, they say that Obama is a formal president, and it is Hillary who runs the White House. It is difficult to say how much in this statement of truth. Maybe five percent, maybe one hundred. If a hundred, then it is clear why Hillary resigns in January. She is really tired. After all, she lost.

Being a significant figure in the international arena, she did not achieve her goal - “to return to the world.” Not only did not achieve, but even reached the opposite. Now only the military operation in Syria is not enough - the one that was recently written to the Independent and which is being planned by the American generals - so that the “location” will be lost forever and everywhere.

But Hillary is not enough for Syria, about which she has long been saying one thing: “Assad must leave.” At the same time, in her opinion, like a phoenix from the ashes, in the east a new tyrannical union is rising from the ashes - the Soviet Union. Not that Mitt Romney’s words about “geopolitical enemy number one” ate Hillary in the brain, or she didn’t interpret the word “integration” accurately, considering it to be synonymous with “Marxism-Leninism”, but now the totalitarian plans of Comrade Putin interfere with the return of universal love for America , which sleeps and sees one big GULAG, stretched from Dushanbe to Vladivostok, on the gates of which burn with red neon letters: “Eurasian Economic Union”.

In short, the enemies of the rod from all sides. And, like in the good old days, Hillary hopes to defeat them ... with dialogue.

It is difficult to predict whether H. Clinton will participate in the 2016 elections of the year, but one can say without fear of a mistake: whoever succeeds Hillary (Susan Rice, for example) as secretary of state, he will not change his rhetoric. Clinton's successor - just like the Obama successor afterwards - will speak and think in exactly the same stereotypes that the state secretaries and presidents have before them. The national debt of America will continue to grow, green money will be printed on the Fed's machine, and the Saudis and Qatari will continue to sell oil and gas for petrodollars. And still America will loudly preach its “values” and demand “favor” to itself, its beloved. In the coming years, the US will not say or do anything new - and this (and not at all re-Sovietization) will kill them.