The inexhaustible potential of AL-31F

Created over forty years ago for the fourth-generation fighter, the AL-31F engine still complies with the technical parameters of the best models in its class. Technological reserve, incorporated in this aircraft engine, allows for its constant modernization. The AL-31F family has become a symbol of the stability of the domestic engine building industry. The developments accumulated during the creation of this model range are used to develop a fundamentally new fifth-generation fighter engine, which will have even higher traction and lower specific gravity.

General of the Army Sergei Shoigu made his first foreign visit as Defense Minister to the People's Republic of China. Military-technical cooperation (MTC) between Russia and China, extremely active at the end of the XNUMXth century and seriously stagnating at the beginning of the XNUMXst century, has regained its second wind in the last two years. The new phase of the Russian-Chinese military-technical cooperation is based on deliveries aviation engines primarily of the AL-31F family. In the devastating 90s for the entire Russian defense-industrial complex (MIC), it was they who largely ensured the commercial success abroad of the multifunctional fighters of the Su-27 / Su-30 line and thus saved not only the domestic military aviation industry, but also the engine-building industry in the whole. Today, the AL-31F developers are using all the accumulated experience and developments to create a fundamentally new engine for the fifth generation T-50 fighter (PAK FA is a promising aviation complex of frontline aviation).

For superiority over F-15

The AL-31F engine developed by the Saturn Moscow Machine-Building Plant (now A. Lyulka-Saturn, has been a part of OAO NPO Saturn since 2001) as the main engine for the future fourth-generation fighter Su-27, the main whose task was to achieve superiority over its American counterpart - F-15. The decision to create it was made in 1971 year. The corresponding conclusion of the Central Institute of Aviation Motors (CIAM) was made based on the results of the analysis of the operation of three engines - AL-31F, D-30F-9 and P-59F-300. 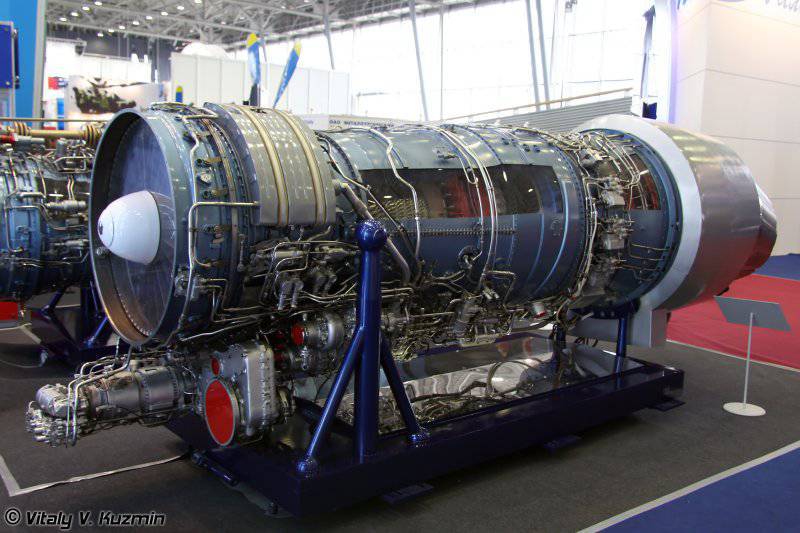 A prototype project aircraft called the T-10-1 was tested from 20 May 1977. Before 1982, for this, nine such machines were built with the engines of the previous generation - AL-21F-3.

Development of a promising aircraft engine was carried out with the 1974 year. But the characteristics of the initial version of the AL-31F (with two-stage high and low pressure turbines and low-loaded compressors) did not meet the tactical and technical requirements. The new turbojet bypass engine was created with an afterburner at the same time as the aircraft was completely redesigned. In fact, the T-10С fighter aircraft, which was newly developed by the Moscow Machine-Building Plant named after P. O. Sukhoi, had, among other things, significantly improved aerodynamic qualities and another layout of the aircraft engine (gearbox and all units in the upper part). 6 August 1985 was signed the act of acceptance of state tests AL-31F. The new engine 12,5 tons of tons had single-stage high and low pressure turbines and highly loaded compressors. One of the key points was the creation and implementation of JSC A. Cradle-Saturn ”turbine blades of a cyclone-vortex system, which made the motor resource, before that it could be operated no more than 70 hours. Work on the extension of the resource has become one of the main directions. Then the requirements of the Soviet Air Force were limited to 300 hours. Currently, this engine rate has reached thousands of hours.

The main manufacturer of AL-31F was determined by Ufa Motor-Building Production Association (UMPO). Then the Moscow machine-building production enterprise Salyut was involved in the program (now FSUE Salyut Gas Turbine Engineering), which was initially engaged in the manufacture of individual engine elements. Over time, there was a kind of division of labor, according to which UMPO (leading by topic) specialized in the production of elements of the cold part of the motor, and Salyut - hot. In this case, the assembly was carried out at both enterprises.

The AL-31FP engine with a swiveling nozzle was first tested in the 1989 year. In April, the 1996 th experimental model of the Su-35 fighter rose into the air with a prototype of this engine with thrust vector control (UHT). During the work on this unit, special attention was paid to the effective control of the nozzle, the difficult task was solved when creating a reliable compacted joint of its movable and fixed parts. The resulting engine provided the world-famous maneuverability and reliability in the management of Sukhoi heavy fighters. Serial AL-31FP installed on the Su-30. The first foreign contract for airplanes with these engines was fulfilled by Ufimians, ensuring the delivery of X-NUMX Su-40MKI (30 engines) to India under the agreement 80 of the year.

During the 90-s, the manufacturers of the AL-31F divided markets through informal arrangements: the engines for Indian aircraft manufactured the UMPO, and Salyut for export to China. As for other foreign customers, Algeria and Malaysia received Su-30 fighters with Ufa engines, Vietnam and Indonesia with Moscow ones. The Venezuelan contract for 24 Su-30MKV2 plants were divided exactly in half.

The events on Tiananmen Square in June 1989 of the year “put a cross” on the supply of Western weapons and military equipment to China. Because of the embargo, the Chinese program to create the national light single-engine aircraft J-10 was in jeopardy. The machine was created on the basis of the tactical fighter Lavi Israeli company Israel Aerospace Industries. The project was closed under US pressure in 1986 in favor of F-16, but it was used by Israelis in joint foreign programs.

Chinese J-10s were to be equipped with a specially developed PW-1120 engine from the American company Pratt & Whitney. But after the embargo was imposed, this could be forgotten. As an alternative option, the high command of the People's Liberation Army of China chose a modification of the Russian AL-31F with a lower arrangement of units - AL-31FN.

The development of the first 14 engines for the Chinese project was performed by OAO A. Cradle-Saturn "in 1992 – 1994 for the customer’s money - the first precedent in stories Post-Soviet defense industry of Russia. The Russian Aviation and Space Agency has chosen the Salut plant in Moscow as a serial manufacturer of the AL-31FN.

The dispute around royalties

Saturn has entered into licensing agreements on monetary compensation (royalties) with him as a developer with UMPO and Salyut, according to which it receives eight percent of the cost of each engine sold - about 250 – 300 thousand dollars. Its price increased over time from 2,5 to 3,5 million dollars. In the case of the AL-31FN, the management of Salyut, having received by agreement incomplete technical documentation for the engine, decided to modify it to the level of mass production. Moreover, Yury Yeliseyev, the company's general director, signed a license agreement with the Federal Agency for the legal protection of military, special and dual-use intellectual activity in 1999, rewriting the actual right to manufacture the engine to Salyut, and thus leveling the agreement with Saturn, which receives royalties only from UMPO.

The export dynamics of the AL-31F family has long become independent (from the supply of combat aircraft). This is especially noticeable in the context of the Russian-Chinese MTC. AL-31FN has become a kind of litmus test for the assessment of the state of the engine-building of the Middle Kingdom. If in most areas the Chinese defense industry is constantly demonstrating serious success, then on the engine front, the Chinese are not yet able to start mass production of a reliable engine for a combat aircraft.

That is why the People's Republic of China continues to continue to purchase engines of the AL-31F series for light J-10, as well as for heavy J-11B / BS (a copy of the Russian Su-27 fighter). In 1996, China acquired a license for the production of X-NUMX Su-200SK planes without the right to re-export to third countries. By the end of 27, 2007 of them were compiled. Then Beijing refused to further implement this licensed program, creating its clone - J-105.

Russian engines are purchased by the People's Republic of China with the formal presence of the widely publicized domestic turbojet WS-10A Taihang bypass, designed specifically for J-10 and J-11. But this motor is characterized by a low resource and a large number of structural and technological flaws that have not yet been resolved. According to official data, Taihang serial production should be deployed before the end of 2015, but these dates seem to be overly optimistic.

China’s attempts to overcome its “motor dependence” on Russia have so far failed. In 2009, the PRC resumed purchases of AL-31F / FN motors. Moreover, the growth of Chinese orders is so high that FSUE Salyut Gas Turbine Engineering Center barely have enough production capacity - almost 2009 units were contracted in 2011 – 400 (the entire volume of orders and supplies is approaching a thousand). Another 140 AL-31FN must supply the UMPO under the 2011 contract to replace the J-11 multi-role fighter jets (Su-27 / Su-30MKK / MK2) that have developed a service life.

According to Vladislav Masalov, Director General of the FSUE Salyut Gas Turbine Engineering Center, the power characteristics of the AL-31F do not quite satisfy the specifications of technical specifications for the Su-family aircraft, which should come into service with the Russian Air Force. It is primarily about the new serial Su-34 front-line bombers and the deeply modernized Su-27CM multi-purpose fighters. The more powerful version of the AL-31F-М1 engine (42-series) created by Salut has been increased to 13,5 tons without changing the overall dimensions. This motor is already supplied serially for the Su-27CM. In addition, it will be used to remotorize the Su-27, Su-30, as well as, possibly, for the 19 remaining in the ranks of the Su-33 ship-borne air group of the heavy aircraft-carrying cruiser Admiral Kuznetsov.

The next stage is the AL-31F-M2, which is scheduled to start mass production next year. According to the results of tests at CIAM, the possibility of increasing the maximum thrust to 14,5 tonnes was confirmed while reducing specific fuel consumption, including in besforshennyh modes. The assigned resource is three thousand hours. Its installation will not require any modifications in the design of the airframe or engine nacelle Su-27CM or Su-34 and can be carried out directly in the army.

After long discussions and struggles for the right to be the leading developer of the engine for the PAK FA, by the decision of the country's leadership, this engine is created within the United Engine Building Corporation (UEC) with the distribution of areas of responsibility. Salut, which is not part of the corporation, is a co-executor of the UEC.

The two main competitors developed their parallel engine prototypes for the fifth-generation fighter - the Yeniseisk-A; the Saturn, the Yeniseisk-B — the Salyut. The final winner was not officially announced.

In the meantime, prototypes of the T-50 are being tested at the AL-41F1 - the “117 product”, jointly developed by NPO Saturn, UMPO and Sukhoi Design Bureau. It is based on the same AL-31F. Some elements are borrowed from the developments on the creation of the “product 117С” (AL-41Ф1С) for the fighter of the generation “4 ++” Su-35. The first stage of the 117 motor for the PAK FA achieves 15 tons, it has a larger diameter turbine, all-view thrust vector control, digital automatic control system. A full fifth generation engine will have a higher thrust and a lower specific weight. The exact parameters, as well as the development process itself, are kept secret. In any case, according to official statements, Salyut and Saturn are working on the project in close contact.