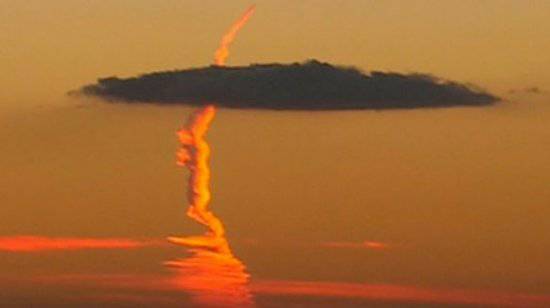 An unidentified flying object is seen off the coast of California. State residents are agitated the newsand the journalists who captured the flight claim that it’s a rocket that is gaining height. The Pentagon does not know anything about the launch. NTV correspondent Alexei Veselovsky conducted his own investigation.


Shots taken from the helicopter shocked California. They clearly visible condensation trail, rising into the evening sky in dangerous proximity to Los Angeles.

Residents of the state decided that some rocket was launched off the California coast, but it turned out that the Pentagon had nothing to do with what was happening. Moreover, nobody there knows what it is.

The trail rises to the upper layers of the atmosphere, black smoke is seen, and then, as if fire breaks out from the nozzle. If we compare these frames with the recording of the flight of a real ballistic missile, then the similarity is difficult not to detect.

Seen drove into a stupor not only the Pentagon, but also the Federal aviation agency, coast guard units, aviation and navy, based in California. None of them launched any missiles on Monday evening and issued no permits for such launches.

Moreover, just in this part of the coast, in 50 kilometers from Los Angeles, there is a mass of air routes, radars constantly monitor this section, but none of them showed a quickly taking off object. The pilots of commercial airlines, flying at that moment in that area, also did not notice anything unusual.

All these oddities have allowed scientists to assume that the usual passenger liner left a mark in the sky, it was simply removed from an unusual angle at sunset, which is why the mark is so noticeable. And the fact that it rises up is just an optical illusion.

John Pike, an expert: “The object is flying at sunset, but it seems that the start was made from water, but this is not so.”

Experts also note that the object moves too slowly for a rocket and often changes course. The Pentagon has already hurried to join the opinion of scientists, saying that the film, most likely, captured the flight of an ordinary aircraft. True, no data on the flight, direction, other information that could reassure the public, is still not available.

The Pentagon insists: no matter what flies in the sky near Los Angeles, be it a mysterious rocket or a plane, it does not pose a threat to the United States. It's not entirely clear where such confidence comes from, if it is still not clear on 100%, what was it all the same?