Ukrainian Alpha: terrorism will not pass 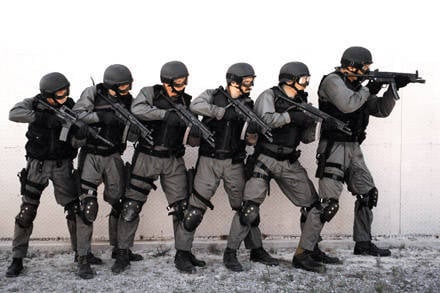 After leaving the USSR and proclaiming independence in August 1991, Ukraine needed to create a powerful anti-terror unit. Often, the Ukrainian media is silent on the initial stage of the creation and development of this unit and most often refers to the only date - 23 June 1994 of the year. Indeed, 23 of June this year, the Ukrainian "Alpha" will celebrate its anniversary - 15 years since the founding of the Office "A" of the SBU. But it would be wrong to ignore the preceding event. history....

The creation date in Ukraine of a special unit for combating terrorism is 3 March 1990. It was then that the order of the head of the 7 department of the KGB of the USSR created the 10 group (Kiev) of Group A of the EIR service of the 7 department of the KGB of the USSR. The order noted that “a special operational-combat unit is designed to localize and suppress terrorist and extremist actions, other particularly dangerous criminal manifestations, including operations in cooperation with other interested units in the fight against organized crime.” Candidates for regional special forces were subject to increased demands: high moral and volitional qualities, good professional and physical training, medical suitability for service in the Airborne Forces, work experience in state security agencies of at least 1 a year, age limit up to 33 years, and many others. Of the 120 employees of the KGB of the Ukrainian SSR, sent for consideration as candidates to the 10 group (Kiev) of Group A, only 15 employees were selected. The first commander was Peter Feliksovich Zakrevsky, now a reserve colonel.

30 May 1992 by the order of the SBU Chairman in the structure of the central office of the SBU 10 Group (Kiev) of Group "A" was transformed into service "C" (special service), the head of which, according to the developed and approved Regulation, reported directly to the SBU chairman, and in his absence - to the first deputy chairman. Employees of Service "C" conducted many combat operations and performed a lot of special tasks in the interests of Ukraine.

One of these tasks was the security and escort of 1992 — 1993 delivered to Ukraine over the course of the year. sea ​​and air transport of containers with the new currency of Ukraine, printed in France, Italy and Canada. In August, 1992, under heightened secrecy, was to transport almost the entire circulation of the hryvnia from Canada at once. The plan provided for absolute conspiracy in the preparation and implementation of the operation. For transportation, a civilian ship with a regular crew was chosen, who did not know what cargo would be on board. They deliberately refused to escort the vessel with naval forces. Only the captain was devoted to the details of the operation, and the top leadership of the state and the chairman of the SBU knew about it. The trip lasted 49 days. The vessel passed more than 11 thousand miles across the Atlantic Ocean, 8 seas and 13 straits, crossed the borders of 10 states, called at 8 ports. At the same time, there were abnormal situations when the fighters of the special group were preparing to repel a possible attack on the ship, but everything turned out well. Watches were the usual daily work (part of the fighters performed the functions of seafarers during a hike), hand-to-hand fighting, training in tactics for protecting the crew and cargo, and training alarms were held twice. 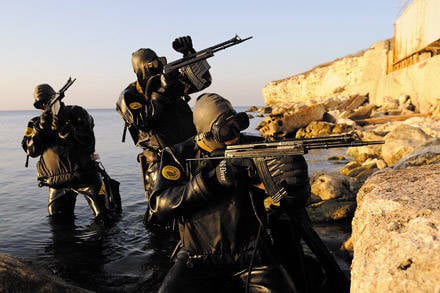 There were four such trips in total. In 1994, the staff of Service “C” made a significant contribution to stabilizing the situation in the Crimean region. By that time, for social and economic reasons, the criminogenic situation in Ukraine became more complicated, and the tension in the society grew. In some regions, criminal groups almost openly acted. Between them often arose armed conflicts with serious consequences. The number of robbery attacks on citizens, officials, merchants increased. Shel redistribution of property. Physical abuse and murder have become commonplace. The life of victims, witnesses and other participants in criminal proceedings was often threatened. Ukraine became attractive for international crime - from the point of view of drug business organization, smuggling weapons and other illegal actions. All of this highlighted the problem of countering crime.

Therefore, 23 of June 1994 of the year by the decree of the President of Ukraine on the basis of service “C” of the Security Service of Ukraine was established Office “A” of the Security Council of Ukraine (Directorate for combating terrorism and protecting participants in criminal proceedings). Management "A" was assigned two new functions on the basis of the laws of Ukraine "On ensuring the safety of participants in criminal proceedings" and "On state protection of judges and law enforcement officers." Vasily Vasilyevich Krutov, now Lieutenant-General, became its leader. Thus, the central subdivision “A” arose, and then its linear departments of the Security Council of Ukraine in all regional cities of the republic and in the city of Sevastopol. They were entrusted with the task of physically suppressing terrorist acts and actions that threaten the security of the state, freeing hostages, seizing dangerous criminal authorities, protecting participants in criminal proceedings, employees of courts and law enforcement agencies, their family members. If necessary - ensuring the security of senior officials of the state, as well as the implementation of particularly complex and responsible instructions of the country's leadership.

The outfit and equipment of the first Ukrainian “alfovtsev” were quite scarce. Modern at that time protective helmets of the Swiss company "TIG", as well as experienced Russian developments in this area were only in Kiev, and then in a small amount. The main shoes were sneakers "adidas" (Moscow). Bulletproof vests were purchased in Armocom (Russia). After several trips to the United States for training courses for special units on the basis of imported models of equipment and uniforms in Ukraine, under the order were made several different types of assault overalls, as well as the production of tactical unloading vests. 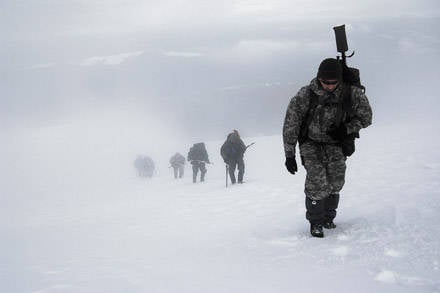 The criteria for the selection of candidates for service in the "Alpha" is still tough. Candidates with service experience in army special forces, special units of the Ministry of Internal Affairs and other security services are welcome. An important advantage is higher education. Special consideration is given to psychological stability, readiness to work in extreme conditions. After all sorts of special tests, tests and interviews, the candidate passes physical training tests, among which a special place is given to hand-to-hand combat. The candidate must confidently master the techniques of hand-to-hand combat: blocking the blows of the enemy, protection from the knife, sticks, threats with firearms, release from seizures. Each technique must be performed skillfully, with an element of surprise and end with a designated blow to the opponent's pain point, throw, suffocation or painful hold. In addition, a sparring is held with three alternately changing "A" fighters. It is considered that a full-fledged Alpha fighter can become an employee in at least three years of service. In the process of preparation, he must master many knowledge and skills, including parachute training, mountaineering, diving training, mine-blasting, and, of course, become a first-class shooter. 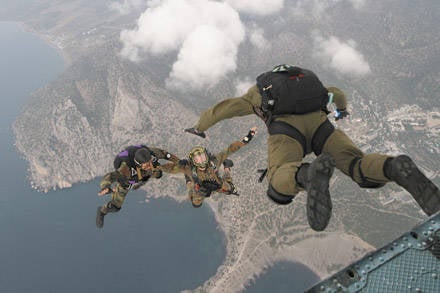 September 24 2007 by decree of the President of Ukraine No. 913 / 2007, Office A was reorganized into the Center for Special Operations for Combating Terrorism, Protecting Participants in Criminal Proceedings and Law Enforcement Officials of the Department of the Security Service of Ukraine.

Currently, the Central Security Service of Ukraine has five departments and regional departments based in each regional center of Ukraine. In addition to the constant combat duty in their own country from February 21 2004, the “A” soldiers of the Security Service of Ukraine ensure the security of the staff of the Ukrainian Embassy in Iraq. Group rotations are held every six months. In total, more than a hundred employees have been tested in Iraq. Before being sent, the group is undergoing special training at the international training center near Koncha Zaspa. There, situations of a different category of complexity are practiced, practical skills of counteraction to attacks of terrorists are polished.

All classes are held in conditions as close to real as possible using ammunition. Shooting in the direction of roadblocks, explosions along the route of convoys, hostage taking, escape routes, evacuation of protected persons - all, as in Iraqi reality. A training center is a whole complex of buildings with a training ground, shooting galleries in which various situations are modeled, a killer-house, a helipad, and many other things necessary for the full-fledged training of a special forces unit.

In addition to the staff of "A", instructors from other special divisions of Ukraine, as well as special forces soldiers from the GUAM member countries, NATO and Eastern Europe, are trained at the Center. It is well known that only cooperation and exchange of experience with related units help to achieve the desired results in combat work, as well as contribute to the growth of professionalism and the acquisition of invaluable experience. In this regard, employees of "A" travel to various countries of the world to attend courses on anti-terror. No less productive are the meetings at international exercises and numerous competitions with colleagues from the former Soviet republics and foreign experts. At the international sniper tournaments (Czech Republic, Hungary), with enviable consistency, the staff of the Ukrainian Alpha has won prizes for many years in a row. International tournaments for prizes of the CIS are also prestigious for employees of anti-terrorist units, where not from the first year (St. Petersburg, 2007; Yerevan, 2008) the first among the snipers are the guys from the Ukrainian Alpha.

A partial update of equipment and equipment affected groups specializing in diving and parachute training, specialists in urban and industrial mountaineering. After a general testing of various samples of camouflage uniforms, it was decided to purchase the uniform of the American company Propper in the multicam colors. Shoe preferences fell on 5.11 and Haix. There is also the practice of purchasing the necessary equipment and individual uniforms of the uniform privately, and here preferences are often given to Russian firms, where price, quality and simplicity are combined into one whole. Body armor of the “Corsair” family and lightweight ZSHM-2 kevlar helmets, available on the equipment of the “A” fighters, are made in Ukraine. Heavy titanium us 95 helmets are purchased in Austria.

The SSU “A” account of the SBU includes a large number of operational combat actions, the seizure of hundreds of firearms, grenades and explosives, and significant amounts in national and foreign currencies. In many regional cities of Ukraine, the forces of the unit eliminated numerous gangs. Little is known about the practical affairs of the Ukrainian “Alpha”. Even if the press reports about the detention by members of the SBU of members of organized criminal groups, it is not always said that this is the work of Alpha. The authority of the special forces does not suffer from this.

Today, worked out to the smallest detail actions allow you to successfully carry out the most complex special events. This is achieved by everyday training. SBU special forces have a high degree of mobility. In a matter of hours, the group on its vehicles can reach anywhere in Ukraine. If necessary, allocated to the unit aviation.

Courageous, physically and psychologically trained employees come to this difficult and dangerous service. Many of them have experience of participating in hostilities in Afghanistan, other hot spots of the planet and the former USSR. The ability to assess the situation at lightning speed and make the only right decision is attached to excellent physical training, because in real circumstances, you have to risk not only your own life, but the lives of your colleagues, hostages, other people who are in places of emergency events. The high morale, cohesion, coherence and personal courage of the special forces officers make it possible to say with confidence that in Ukraine there is someone to resist terrorism. The division's motto was and remains: "Life is for the Motherland, honor is for no one!"