BMP-2M: three projects with one name

December 11 2012
64
For over thirty years, the infantry fighting vehicle BMP-2 has been in the ranks of the domestic armed forces. If we take into account the fact that it is a slightly modified BMP-1, the age of this car is smoothly approaching fifty years. It is quite obvious that such old cars need to be replaced with new ones. In the late eighties, a completely new machine, the BMP-3, was created, but it did not go into as large-scale production as the “Unit” and “Two”. Because of this, the BMP-2, despite its solid age, is still the main vehicle of its class in the Russian armed forces, and will keep this “rank” over the coming years. However, as time goes by, the views on the fighting change, and after them the requirements for the new equipment are adjusted. Designed for large-scale combined-arms battles, the BMP-2 was not very adapted for conducting combat operations in urban conditions, etc. Thus, approximate requirements for its modernization, designed to increase combat potential, have long been formed.

According to the existing rules for the designation of weapons and military equipment, the seriously upgraded BMP-2 received an additional letter "M". Interestingly, under this designation, with a small time difference, three options for modernizing the combat vehicle were created: two are simply the BMP-2М and the BMP-2М Berehok. From each other, they differ, first of all, in armament and equipment. 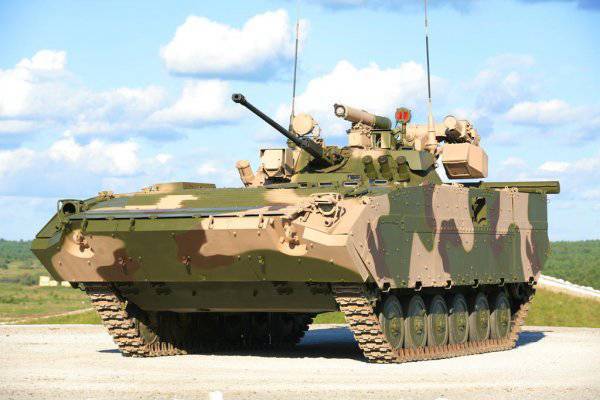 In the late nineties, the Kurgan Special Design Bureau of Mechanical Engineering, together with the Tula Instrument Engineering Design Bureau, prepared a draft of the first modernization of the BMP-2 with the letter “M”. When creating this project, the aim was to increase the firepower of the “Two” to the level of the BMP-3. To achieve higher rates of armament, the easiest way was chosen. On the chassis of the BMP-2 installed combat module "Bakhcha-U", originally designed for the infantry fighting vehicle of the third model. This combat module is equipped with a 100-2 70-mm gun launcher with 34 shot ammunition, an 2 mm 72 30 automatic pistol (500 rounds) and a 7,62-mm PKT machine gun (2000 cartridges). In addition, the Bakhcha-U combat module can fire guided missiles of the 9М113 and 9М117 families by launching them through the 2-X70 gun barrel.

The new combat module was significantly larger and heavier than the original BMP-2 armament system. Because of this, firstly, we had to slightly re-arrange the internal volume of the vehicle and remove two seats for paratroopers, and secondly, the combat mass of the BMP-2M increased to fifteen tons. In addition, due to some additional minor improvements, the upgraded infantry fighting vehicle lost the ability to cross water obstacles by swimming. Also slightly reduced the maximum speed when driving on the highway and cross-country traffic.

Such a BMP-2M in a single copy was collected at the very end of the nineties and then passed the tests. According to reports, the military was not interested in such a modernization. First of all, they were not satisfied with the landing of only five people and the loss of buoyancy. Another indirect cause of failure can be considered the comparative high cost of the Bakhcha-U combat module and alteration of the original BMP-2 into the BMP-2М. There is information about the conversion of only one experimental machine. Further, the BMP-2М with the Tula combat module were not manufactured. 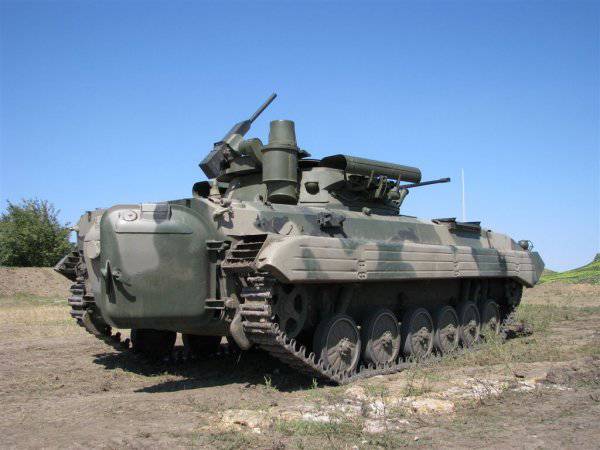 The next improvement option for the “Two” was the project of the Tula Instrument Design Bureau, which received the same designation as the previous version with the “Bakhchoy-U” - BMP-2М. For convenience, the name “Berezhok” was added to the name of the updated combat vehicle. The basis of this modernization was the combat module B05Я01, developed on the basis of the native weapons complex BMP-2. As before, the “main caliber” is the 30-mm 2-42 automatic cannon with ammunition in 500 shells. 7,62-mm PKT machine gun (2000 ammunition) is paired with a gun. On the roof of the gun turret, on the mobile unit there is an AGNS-30M 30-mm automatic grenade launcher with band feed and ammunition in 300 shots. The barrel armament of the combat module B05Я01 makes it possible to effectively attack lightly armored vehicles and the enemy's manpower at a distance of up to one and a half to two kilometers.

To attack serious targets, for example tanks, at a greater distance, the B05Y01 module includes the equipment of the 9K135 Kornet anti-tank missile system. On the sides of the tower there are two launchers designed for two transport and launch containers of missiles each. Containers with missiles are covered from bullets and fragments by light armor screens. Depending on the specific modification of the missile, the B05Y01 module is capable of hitting targets at ranges of up to 5,5 kilometers (9M133-1), 7,5-8 km (9M133M-2) or 10 km (9M113FM-3). For detecting targets and guiding missiles, the B05Y01 module is equipped with the appropriate equipment: a two-channel gunner’s sight (with a television and thermal imaging channel), a laser rangefinder, an automatic target tracking and command generation equipment for the missile. The BMP-2M Berezhok anti-tank weapons ammunition consists of only four missiles. Due to the placement of anti-tank missile launchers, their reloading is done manually, outside the combat situation. Additional weapons "Berezhka" consists of two three-barrel smoke grenade launchers. According to the calculations of Tula designers, the firepower of the BMP-2M Berezhok increased 3,2 times compared to the original Two, and losses during a typical combat mission (attack on a strong point) due to the longer firing range can be reduced by two seconds half times.

When creating the Tula version of the modernization of the BMP-2, special attention was paid to increasing the firepower, for which the new combat module B05YA01 was created. The level of protection and driving performance remained the same. In addition, in contrast to the previous BMP-2M, “Berehok” retained the ability to swim across water bodies. The requirements of the military for buoyancy of the machine seriously affected the level of protection: all available weight and size reserves without damage to buoyancy were used to change the composition of weapons. The design of the armored hull has not undergone any changes, in addition, no additional mounted protective modules were provided. All this makes the BMP-2M "Berezhok" an interesting machine, but leaves some grounds for criticism. Due to the lack of advantages over the existing infantry fighting vehicles in the level of protection "Berehok" has not very high commercial prospects. It is worth noting that at the beginning of the autumn there were reports of the Berezhka procurement by the Russian Ministry of the Interior. In addition, as early as in 2005, a contract was signed with Algeria, according to which the three hundred BMP-2 BMPs in its possession will be converted into BMP-2М.

A little later, the BMP-2M from Tula by Kurgan specialists proposed another version of the modernization of the “Two” with the same name. At this time, at the cost of buoyancy, it was proposed to seriously increase the level of protection of the armored hull. After several options, on which different ways of reducing the likelihood of injury were tested, the BMP-2M was manufactured with a number of significant innovations.

Enhance firepower was achieved by installing on the tower dual launcher anti-tank complex "Attack". According to its characteristics, this ATGM is close to Cornet, but it has a number of differences. For example, the targeting of the Attack missiles is carried out via a radio command line, and not with a laser beam. The installation of the Attack complex entailed corresponding changes in the electronic equipment of the infantry fighting vehicle. Gun-gun armament of the Kurgan version of the BMP-2M is no different from the complex weaponsapplied to the original "Two". These are all the same 2А42 gun and PKT machine gun.

In the course of work to increase the level of protection, the Kurgan version of the BMP-2M has undergone several changes. The first option of additional protection included armored panels that could withstand the hit of 12,7 caliber millimeters from all angles, as well as anti-cumulative grilles. In addition, part of the hull was closed by dynamic protection units developed at the Steel Research Institute. For a number of reasons, primarily due to the risk of damaging the body of the machine when dynamic protection is triggered, this option of an additional set of measures was not offered to the customer and as a result became the basis for a new development. The second option meant the addition of additional armor plates and gratings, as well as a new dynamic protection system. The updated development of the Scientific Research Institute of Steel did not hit the BMP case so much, however, in this case the system of additional protection did not go into the series. The current third variant of additional modules is to some extent similar to the previous ones - panels, grilles and dynamic protection “boxes”. However, during the development of the third protection option, a number of technological measures were taken, which at the cost of losing buoyancy made it possible to achieve acceptable levels of protection. According to reports, the Kurgan version of the BMP-2M from all angles can withstand large-caliber bullets. 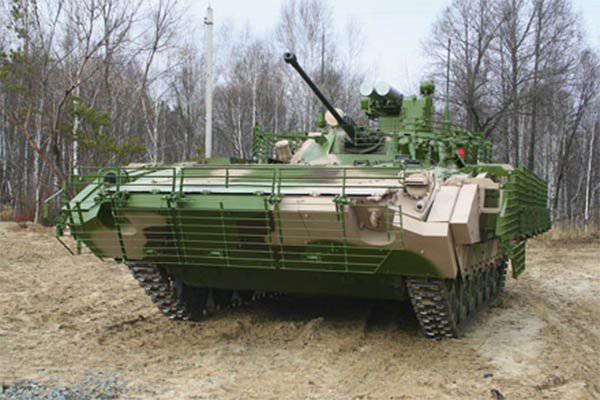 All three variants of the BMP-2M, despite the same name, have different characteristics regarding firepower and the level of protection. At the same time, the features of all three modernization projects of the “Deuce” clearly demonstrate the problems typical for this class of equipment. First of all, it is the difficulty or even the impossibility of combining in a single combat vehicle a high combat potential, counter-and anti-cumulative protection, buoyancy, as well as the ability to transport a large number of troops. It is because of this problem that the joint Tula-Kurgan BMP-2M carries a solid armament complex with good ammunition, but does not float, is protected only from small arms and carries only five fighters; and the Kurgan modernization option is well protected, but has not received serious innovations in the composition of weapons.

Prerequisites for the existing problems of all three variants of the BMP-2M appeared even at the stage of the formation of requirements for the very first domestic infantry fighting vehicle. As a result, the improvement of one parameter leads to the deterioration of another or even others. It is quite obvious that without rejecting this or that requirement, for example, buoyancy, the BMP-2 simply cannot improve several of its characteristics at once. However, in this case, the installation of more advanced and / or heavy weapons may entail the replacement of the engine and transmission, as well as other components and assemblies. It is unlikely that such a modernization will be profitable for the re-equipment of all army combat vehicles. Therefore, at present it is important to pay special attention to the requirements for a promising infantry fighting vehicle based on the Kurganets armored platform, to evaluate all the opportunities and risks and, if necessary, to abandon this or that requirement, or make it softer. Only with such an approach in the future will it be possible to avoid current problems with the modernization of a promising combat vehicle.