Gullible Serdyukov has nothing to do with it 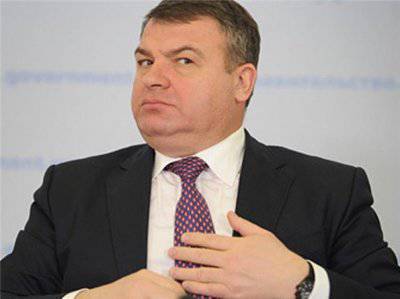 In possession of "Rosbalt" were the investigation materials about the theft of property of the Ministry of Defense. It follows from them that the Investigation Committee (SK) of the Russian Federation has almost no complaints against the former head of the military department, Anatoly Serdyukov, because his subordinates, including Yevgeny Vasilyev, “deceived” him and “misled”. But the circle of classmates Vasilieva, who have become accused in the case, may expand. Investigators suspect that close friend Vasilyeva, head of the Main Directorate of Arrangement of Troops (GUOV) Lyudmila Egorina took part in real estate frauds.

It should be noted that in most of the materials of the Military Investigation Department of the RF IC, for example, in resolutions on initiating a case of fraud when selling a country house in the Krasnodar Territory (the so-called "Serdyukov villa") - on the role of former military department in the events it is reported extremely dry and evasive: “the officials of the Department of Property Relations (DIO, headed by Yevgeny Vasilyev - Rosbalt) of the Ministry of Defense, exceeding the powers granted to them, organized the preparation and publication of directives defense nistra ... " In these and some other materials of the case, a full legal assessment is given of the actions of the defendants - Vasilyeva, Egorina, Smetanova, Zakutaylo and others ("exceeding authority", "out of mercenary motives", etc.), and the actions of the head of the military department are not characterized. Moreover, even the names of Serdyukov are not in the documents, everywhere he is simply referred to as “the Minister of Defense”.

However, in materials on fraud with shares of OAO 31 GPISS and real estate GUOV, investigators assess Serdyukov’s actions. "Persons (Vasilyeva, Yegorina and Zakutailo - Rosbalt), who performed managerial functions in Oboronservis OJSC and ... (the subsidiary structures of this joint stock company are listed, including those where Zakutymailo was the general director, Rosbalt), fraud and abuse of trust, misleading the leadership of the Russian Ministry of Defense and shareholders, transferred payment orders to the account of Legal Support Center Expert (company headed by Vasilieva Ekaterina Smetanova - Rosbalt) for the total amount of 234 million 900 thousand . RU bley. "

That is, according to the latest version of the RF IC, Vasilyeva was simply deceiving his gullible boss Serdyukov, and he himself did not know anything about the scams that his subordinates "scrolled" behind his back.

Classmates in the Ministry of Defense

From the case file it becomes clear that further investigation will move not "up", but "in breadth." Investigators are now exploring in detail the activities of Vasilyeva’s friends, who are trapped in the Defense Ministry system. First of all, it is about classmate Vasilyeva in the Faculty of Law of the St. Petersburg State University Lyudmila Egorina, who at various times occupied the positions of Acting. Director General of JSC Oboronservis and the head of GUOV. In particular, an investigation is underway to sell GUOV facilities at a lower price.

"In June 2011, the general director of OAO" GUOV "Yegorina L.M ... performing managerial functions in a commercial organization contrary to its legitimate interests and protected interests of the state, in order to reap the benefits and advantages for those leading and managing OAO Granit-Kuznechnoye" doing business in the rubble market of granite within the boundaries of St. Petersburg, wishing to please the persons who are members of the governing bodies of OAO GUOV and OAO Oboronservis (meaning Vasilyev - Rosbalt), and others statement on the implementation of the profitable enterprise LLC 436 KNI of JSC Granit-Kuznechnoye at a lower price. "

According to the investigators, Yegorina also illegally donated to Granit-Kuznechnoye a license for the right to use subsoil resources at the Prudy-Mokhovoye-Yaskinskoye deposit.

The Supreme Court of the Russian Federation believes that Yegorina and Vasilyeva took an active part in the scam selling buildings in Moscow’s Bolshoi Predtechensky Lane, which belonged to GUOV.

"4 July 2011 members of the board of directors of Oboronservis OJSC (composed of the chairman - head of the DIO of the Ministry of Defense Vasilyeva, members - head of the department for coordinating the exercise of rights of the owner of the MO Shtykulin, acting director general of the JSC" Oboronservis "Yegorina) commercial organization and the legally protected interests of the state, approved the transaction for the sale of this property complex LLC "Theorem" at a lower price ".

The investigation concludes that "the unlawful actions of the said persons led not only to the damage caused by GUOV, but also caused a violation of the property interests of its founder, the Russian Federation." The amount of damage from a deal with buildings in Bolshoi Predtechensky is estimated at 202 million rubles.

The Supreme Court of the Russian Federation Armed Forces of Russia built in detail the whole scheme under which the former fellow students acted, and also found out where they got the money to buy real estate from the Defense Ministry on the cheap in their own interests.

According to the investigation, on April 10 of 2009, Minister of Defense Anatoly Serdyukov appointed Yevgeny Vasilyev, the head of the DIO, and 15 of February, 2011 of the year and. about. General Director of Oboronservis became Egorina, who "in the period of 1996-2001, together with Vasilyeva, studied at St. Petersburg State University." By decision of the head of the military department, Vasiliev and Egorin were included on the boards of directors of a number of subholdings and subsidiaries of Oboronservis OJSC. 1 On April 2011, a meeting of the board of directors of OAO Oboronservis was held, at which Capital Consulting, as proposed by Vasilyeva, as an organization providing property valuation services for the military department. At the same meeting, Expert Legal Support Center LLC was granted the right to provide agency services in real estate sales.

As noted in the case file, Vasilyeva had previously worked as a lawyer in a company "affiliated with Capital Consulting LLC. And Yekaterina Smetanova, general director and founder of Ekspert, was a classmate of Vasilyeva and Yegorina." This may indicate conspiracy and self-interest of these individuals in exercising their authority. "

Further, according to investigators, fellow students began to form the monetary base for subsequent scams. Despite the fact that the directors of the Defense Ministry were negotiating directly, the documents were drawn up so that the agent for the transactions was Expert, to whom the subsidiaries of Oboronservis regularly transferred interest from each amount received from the sale of buildings. Operatives of the Interior Ministry of the Russian Federation believe that part of the property was sold at a lower price, for which Smetanova separately received "kickbacks" from buyers.

When in December 2011 a large amount of money accumulated on the accounts of Smetanova’s structures, under the loan agreement, it transferred these funds to VitaProject LLC, the founders of which were Expert and Alexey Naumkin. The latter was also the general director of VitaProject and the head of the legal department of Expert.

It was VitaProject for the money paid by the Ministry of Defense as an agency fee. From December 2011 to January 2012 bought a part of the most “tasty” objects of the military department. In particular, the stake of OAO "31 GPISS", which owns a number of buildings in Moscow.

According to the investigation, Capital Consulting LLC valued the assets of the Ministry of Defense at a lower price, the misguided Defense Minister signed the necessary directives, VitaProject LLC bought military objects on the cheap, and even from these transactions continued to receive agent interest.

The Supreme Court of the Russian Federation especially carefully studied the features of the sale of a country house in the village of Peresyp of the Temryuk district of the Krasnodar Territory, which the locals called the “summer house (or villa) of Serdyukov”.

As follows from the case, this object was previously owned by the subsidiary structure of the Federal Tax Service FSUE "SPb Inzhtechcentre". Recall, before becoming Defense Minister Anatoly Serdyukov headed the Federal Tax Service. However, in April 2010, the government, at the request of the military department, transferred “St. Petersburg Engineering Technology Center” from the Federal Tax Service to the Ministry of Defense, where the federal state unitary enterprise received a new name - “St. Petersburg Engineering and Technology Center of the Ministry of Defense”. And then "officials of the DIO, exceeding the powers granted to them, ... prepared projects and ensured the implementation by the Minister of Defense" of a number of legal acts.

28 May 2010 of the year Serdyukov transferred the country house in Peresyp from the balance of FSUE "St. Petersburg Engineering and Technical Center of the Ministry of Defense" to the balance of FSU "Zagorodnaya KECh rayon". October 13 2010, Serdyukov ordered to secure a country house already for the state unitary enterprise "District material warehouse" ("OMC"). 28 December 2010, the Minister of Defense signed an order on the privatization of the state unitary enterprise “OMS”, in the list of assets of which, which is also subject to privatization, Vasilyeva included a property in the Temryuk district. And in the same December, the Ministry of Defense began the construction of a suburban complex at Peresyp, on which a total of Defense Ministry spent 328 million rubles of budget money.

18 March 2011, the state unitary enterprise "OMC" was registered as a company. That is, the privatization took place. 13 April, Maxim Zakutaylo, Ekaterina Smetanova's husband and classmate Vasilyeva, was appointed CEO of OMS. According to investigators, in May 2011 of the year asked Zakutailo LLC Capital Consulting to evaluate the country house by the sea as of December 28 of 2010 of the year - for the period when Peresyp had not started building a luxury mansion. It is noteworthy that by this time all the old buildings in Peresyp were demolished, and in their place a new modern complex began to appear.

Despite this, Capital Consulting concluded that the value of the object was 92,1 million rubles. 19 August 2011, "DIO officials, exceeding their authority, organized the preparation and publication of the directive of the Minister of Defense," according to which the OMS board of directors was ordered to approve the implementation of a country house in Peresyp as a "non-core asset". In the same directive of the minister, the sale price is also indicated - 92,1 million rubles. For this amount, in September 2011 of the year, "Serdyukov's Dacha" was bought by CityEngineering LLC. Who is the real owner of this company, in the case file is not specified. It noted only that "the buyer of this property - LLC CityEngineering" - was known to the seller long before the transaction. " And even with this transaction, by decision of Zakutaylo, the agency interest in the amount of 5 million rubles was transferred to the firm of his spouse "Expert".

It is worth noting that the text of criminal cases draws attention to the fact that they were initiated according to the materials of the Department of Military Counterintelligence of the Federal Security Service of the Russian Federation and the Main Military Prosecutor’s Office.

Ctrl Enter
Noticed a mistake Highlight text and press. Ctrl + Enter
We are
List of destroyed the largest and most high-tech enterprisesAnatoly Serdyukov - "not a man, this is a function"
162 comments
Information
Dear reader, to leave comments on the publication, you must to register.