The first judicial fruits of the WTO 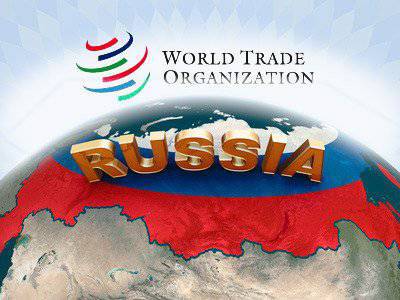 Less than six months after our country received official status of a member of the World Trade Organization, the fruits of this adventure were not long in coming. Apparently, the “pretend marriage” promised by the Russian authorities will not work. Senior partners in the trading mesalliance are in a hurry to declare the need for the Russian Federation to fulfill its obligations for the presale preparation of the most tidbits of the Russian market. Their unenviable fate consists in the subsequent posting by sharks of transnational business.

As it became known, representatives of the United States, the European Union and Japan are already preparing to submit claims to Russia through joint efforts. Speaking recently at the WTO Goods Trade Council, the Commissioner from the European Union reminded the Russian leadership that all members of the trade club are obliged to play by the rules, which imply, in particular, the rejection of the use of "protectionist measures." The fact is that at the end of November, Russia banned the supply of pig products from Latvia due to the unfavorable sanitary and epidemic situation among our Baltic neighbors, where an outbreak of the classic swine fever had recently erupted. Even the "senior comrades" in the WTO are unhappy with the "discrimination" of Italian beef, which the Rosselkhoznadzor has wrapped up due to the inadequate documentation.

If the international Themis, who suffers from night blindness in relation to Russia, decides against Moscow, the Russian consumer will be doomed to eat “plague” proteins.

However, in the near future Russia will be presented with a number of questions. Thus, a separate item on the agenda of the above-mentioned meeting of the Council on Trade was “On the implementation by Russia of the WTO agreements: statement by the European Union, Japan and the USA” In addition to the contested ban on the import of live cattle from the European Union, the utilization fee for cars imported to Russia and even the parameters of state support for the domestic oil industry are mentioned as inadmissible measures. That is, the industry that forms the basis of the petroleum dollar well-being of our budget. In turn, MEPs decided to go even further. Their efforts in the near future Russian state bodies may be overwhelmed with subpoenas from the WTO courts. Among other things, the provisions of the law on public procurement will be challenged, according to which the preference should be given to the Russian producer during the development of budget funds. The authors of the document consider that “the established trade barriers caused great harm to exporters from the European Union”.

Moreover, the judicial misadventures of the defendants from the Russian side do not end there, but rather, they are just beginning, since the Europeans clearly intend, in the procedure established by the WTO rules of procedure, to indicate to Russia with whom to unite, create alliances, be friends, and with whom (according to the principle know what you need ") to be on opposite sides of the geopolitical barricades. In Brussels, the “brainchild” of Vladimir Putin entitled “The Customs Union and Eurasian Integration”, widely publicized within Russia, has already been sharply criticized. According to the old-timers of the WTO, our country's membership in the Customs Union with Kazakhstan and Belarus "goes against the rules of the WTO." As was to be expected, our overseas well-wishers immediately consolidated with such a position. In this connection, the US Secretary of State Mrs. Hillary Clinton agreed to the point that a monstrous sedition is hidden under such names as the Customs Union and the Eurasian Union - an attempt to restore its sphere of influence in the post-Soviet space. According to her, "Sovietization will not work." “You can't make a mistake. We know what is the goal, and we are trying to find an effective way to slow down or prevent this process, ”- that's what Hillary Clinton literally said. Moreover, after the Russian elites managed, by hook or by crook, to draw Russia into the WTO, another challenging attempt to shamelessly intervene in the affairs of sovereign states would in fact be legitimized by Russia's participation in the free-traders club.

By the way, it will be interesting to see what counter-arguments Vladimir Putin will show, from which the West is now clearly trying to knock out his old rhetorical “chair” in the form of a Eurasian integration project promised before the elections to the Russian audience. It can be said, for our high-ranking “colloquial artist”, the moment of truth is coming.

The publicist and public figure Maxim Kalashnikov tells how the declared by the Russian authorities vector for Eurasian integration with the forced involvement of Russia in the global economic structures agrees.

- Sometimes it seems that our government suffers from schizophrenia, when the left hand does one thing and the right hand does another. That is, there are mutually exclusive things. Many experts initially warned: either we are creating the Customs Union and are engaged in the reintegration of the post-Soviet space, or are joining the WTO. Because, relatively speaking, it is impossible to simultaneously belong to the National Socialist Party of Germany and have a membership card of the CPSU (b). Here, as in a joke about the "cross and underwear" - if you take off your underwear, then about the cross, be kind, do not forget.

However, our government does not see any contradictions when it takes mutually exclusive steps. From the very beginning, analysts warned that the Russian Federation did not have enough lawyers who were well prepared to defend the Russian position and conduct trade disputes in the WTO courts. Naturally, Europeans are well aware of this and are trying to take advantage of this situation. It’s not necessary to compare business conditions in the Russian Federation and European countries. In the EU, on average per hectare of arable land accounts for about 450 dollars of state subsidies. And in Finland, if I'm not mistaken, more than 500 euro. That is, the local agriculture (by the way, like the Soviet agribusiness) receives massive government support.

Without these subsidies (including subsidies for the purchase or leasing of agricultural machinery) prices for European food products would be 40 – 50% higher. Naturally, Europe is not going to refuse such volumes of support. And they will punish us for it, taking advantage of the fact that the mechanism of protection of domestic producers does not work. The Putin team will quite naturally run into lawsuits through the WTO. As they will fight back from them, I, frankly, I will not attach my mind. Because if our management accepts these requirements, then our producers (and not only in agriculture) will immediately go bankrupt. What does it mean to remove the requirement of priority participation of domestic producers in the system of public procurement from our legislation? We have all the institutions (up to the inhabitants of prisons and hospitals) will use European products. And our peasant in connection with the policy of the government will be uncompetitive.

That is, on the one hand, we have great-power patriotic rhetoric “for internal use,” periodically gives a presentation in the genre of patriotic interludes on the road (for example, in Munich). And on the other - we see a real policy, which is often the opposite of declarations. Do not forget that Putin is surrounded by a dense liberal get-together. These are bankers, experts, their representatives in the government and others. Their efforts extinguish and nullify all nationally oriented initiatives. The Russian Federation was initially postulated by the West as a state that was supposed to consolidate the results of the defeat of the Russians in the world geopolitical arena. It is designed to keep the Russians in a half-dried state and under control. At least, this territory should not be developed in terms of processing industry, science and high technology. At the same time, our “elites” are “on the hook” all the time. In order to periodically twitch for him and remind him of who's boss. Putin, the West, apparently, regards as "waste material". Therefore, despite all the concessions and sagging before the West, he always pulls the fishing line (“Magnitsky list” from this series) so that the “hook” would dig more deeply into his lip.