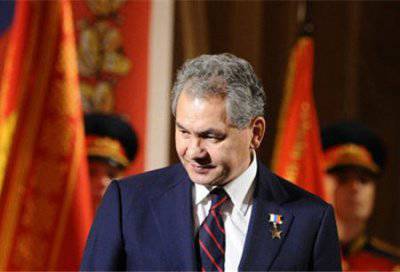 Sergei Shoigu continues to be actively mastered in the chair of the Minister of Defense. And the longer time passes since its appointment, the more positive news comes from the main military department. More recently, Russia has in fact become accustomed to the fact that military reform should take place only as a complex operation without any anesthesia, and if anesthesia is given, it is only to conceal the scale of the “operational flaws”. And after the reformed patient in the person of the entire Russian army came after the termination of the narcosis in himself, he often found scars on his body, indicating that the next surgical intervention had taken place. And if this intervention was associated with the removal of appendicitis or with the removal of an important organ, the question remained open. Unfortunately, the removal of vital organs took place, and therefore, the further the reform went, the worse the patient felt.

But Sergei Shoigu once again shows that military reform can also proceed without serious consequences. And not only painlessly, but also with an obvious focus on efficiency. After all, before this, the Russians could not understand why an increase in the combat capability of the army required reducing to the limit the number of military universities and dismissing experienced military teachers. The previous heads of the military department could not explain it either, who only allowed themselves some unintelligible mumbling that everything was going according to plan, they said, this was necessary, and who are you to ask your stupid questions. We have, they say, military reform is gaining momentum, and no one has yet canceled military secrecy ...

And now, when the new head of the Ministry of Defense looked into the depths of this military secret, he apparently realized that the reforming algorithms were far from always connected with common sense.
One of the segments of military reform, which Sergey Shoigu drew attention to, was military education. The minister said that in the course of the reform, the well-reasoned state order for the training of military specialists in the relevant higher educational institutions of the country was not yet determined. Shoigu laments the fact that military education in Russia, despite all the talk about modernizing the army itself, clearly does not respond to requests from the state. Many military universities still use training programs and standards that were used even 20-25 years ago (this is still the best). The minister stressed that the future of the Russian army itself depends on the quality of training officers, their knowledge and skills.

And with these words it is difficult to argue. Indeed, when it comes with enviable regularity that it is reported that another military university has been disbanded in a certain region, which allegedly ceased to be effective and in demand for the army, you involuntarily catch yourself thinking that the whole reform is not aimed at improving the quality of the country's defense , and on the release of funds, persistently referred to as optimization.

In this regard, the words of Sergei Shoigu, who sets himself and the Ministry headed by him the tasks of developing the military education system in Russia, are like a balm for the soul. The main thing is that this balm does not clouded the head, and contributed to the real embodiment of ideas in life.

Shoigu instructs all military authorities, for which, in essence, officers are trained, by the beginning of April 2013, to develop a list of qualification requirements for vocational training of graduates of military universities.
And by January of next year, the Russian President should be presented proposals on changing the composition of the network of military universities, as well as a draft regulatory framework on the creation of independent military universities. Examples: Chelyabinsk Higher Military School of Navigators, Military Academy of Military Air Defense, etc.

The minister is focusing on the fact that new military equipment began to arrive in the army, which Russian military personnel must skillfully exploit. And in order for such skills to appear, it is necessary to carefully study the educational standards that are used in the remaining military higher educational institutions today, and to make a competent and thoughtful adjustment.

I would like to hope that those persons to whom Sergei Shoigu gives such instructions will understand his concern correctly. After all, it often happens with us that even the most positive aspirations in some inexplicable way distort beyond recognition. The minister said “to make adjustments” - they can lead such that didactic innovations come to light, the realization of which can lead to depressing consequences. If, even in the field of military education, the level of efficiency of higher education institutions is measured by the same patterns as in the civilian sphere, namely the number of foreign students (cadets) and the area of ​​space for a single student, then the quality of training of graduates is unlikely to seriously improve.

Obviously, the military education system in the first place needs to be modernized. After all, if we carry out measures for the rearmament of army units, but at the same time in military high schools only use the textbooks of the Cold War era, we should not expect well-trained young officers to appear in the army.

Frankly, I want to say that the modernization of military education was going along with the development of military science, which today is also far from being in a festive condition. And if in the course of reform in the military education environment traditional teaching methods are used along with methodological innovations based on the use of updated material and technical base, then the result will not take long.