The appearance of the army of the XXI century, the reality 2010 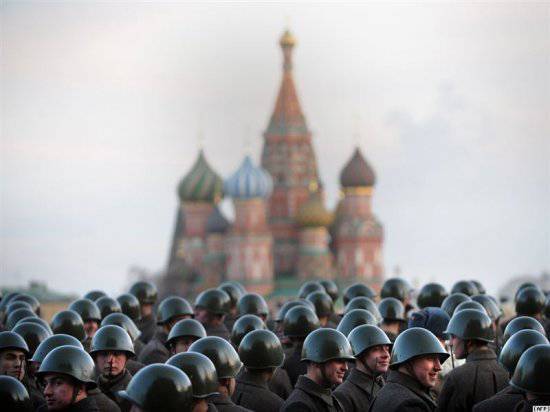 Russia today has unique opportunities to create a highly efficient army, but in order for such an army to finally emerge in Russia, it is necessary to work seriously. Such a statement was made by the Supreme Commander, President of the Russian Federation Dmitry Medvedev, at a board meeting of the Ministry of Defense 17 in March 2009. weapon as part of the execution of the state defense order (GOZ) on 2009-2011 g will be purchased in the next 5-6 years. It was planned to give priority attention to strategic nuclear forces, spending to maintain their combat effectiveness about 25 percent of the funds allocated from the budget for the implementation of state defense orders. In total, more than 1,5 trillion were allocated for the implementation of the three-year GOZ. rubles.

These plans included accelerating the development and modernization of reconnaissance and communications equipment for tactical units, missile attack warning systems, and radar stations for the ground forces. For the Air Force, it was planned to accelerate the modernization of the MiG-29, Su-25, Mi-28N helicopters, additionally buy the MiG-29, Su-27SM and Su-30MK2 aircraft, Ka-52, Mi-28N, Mi-24M, Mi-8MTV5 helicopters , purchase the Pantsir-C air defense missile system, as well as modify the available anti-aircraft guided missiles. In the interests of the Black Sea fleet it was supposed to complete work on the creation of a Lada diesel submarine with a sonar system, to modernize the Varshavyanka diesel submarines, to accelerate the creation of a new large landing ship and Bal-U type missile launcher. The distant were not forgotten either. aviation Air Force and Space Forces. It was planned that all these measures will significantly accelerate and increase the pace of re-equipment and modernization of the Armed Forces in the next three years, taking into account the specified promising appearance. In spite of the financial crisis, the President made a decision to allocate additional funds from the budget to fulfill the tasks set to ensure civil defense and the formation of a new modern look for the Russian army.

And after a year, 5 in March 2010, at the next extended meeting of the Defense Ministry board, the Supreme Commander summed up and determined the tasks for the future. At this meeting, the President of the Russian Federation, Dmitry A. Medvedev, noted that it was possible to ensure the fulfillment of the State Defense Order "not without problems", and "the mechanisms for the implementation of arms procurement agreements are not effective enough." Such an alarming statement by the head of state was due to the fact that out of the allocated budget funds, and this is more than a trillion rubles, half of which was directed at rearmament, most went to the implementation of various corruption schemes, almost at all stages of modernization, starting with planning tenders and forming prices and ending with the supply of weapons and military equipment (IWT) directly to the troops. This is confirmed by the statements of the Chief Military Prosecutor Sergey Fridinsky. According to him, more than 2010 officials, including several high-ranking military officials, were convicted in 70 for various speculations and frauds in spending the allocated funds, dozens of criminal cases were initiated. Joint inspections by the prosecutor’s office and the presidential control department showed that the current regulatory framework of the supplier’s mechanism for defense needs has become a feeding trough for various businessmen who have the least thought about the country's defense capability. The current base actually legitimizes delaying work and extending the contract to increase funding, along with abuses and numerous corruption distributions of budget money, the situation with spending money becomes almost critical.

According to Fridinsky, in order to curb various abuses, to exclude the participation of intermediary firms that do not have financial and operational conditions for the execution of tenders and to divert money from the real sector, it is necessary to change the federal laws “On State Defense Order” and “On Placing Orders for Goods, Works , provision of services for state and municipal needs ". At the moment, these laws make it possible to turn the ongoing tenders for the execution of works into a profanation. In general, we can say that at the moment, the tasks of modernization and rearmament within the framework of the CRP are solved with a “scratch”, development for the state defense order is considered solely as a way of appropriating funds by various outdated businessmen and fraudsters, with the help of unscrupulous military officials and flaws in laws governing orders. For example, in the past 2009 year, this led to damage to the state in 1 billion rubles. allocated budgetary funds. At the moment, in terms of improving the situation, there is little that has changed, there is something to think about, draw conclusions and take action.
Ctrl Enter
Noticed oshЫbku Highlight text and press. Ctrl + Enter
Military Reviewin Yandex News
Military Reviewin Yandex Zen
Add a comment
Information
Dear reader, to leave comments on the publication, you must sign in.