The most interesting answers to questions Medvedev five channels 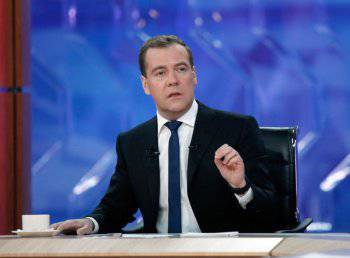 Why can't the former minister Serdyukov be planted right now, does Dmitriy Medvedev want to become president again and is he preparing for the end of the world? The head of government answered these and many other questions live. The Prime Minister traditionally summed up the year and commented on the recent high-profile events.

Representatives of the five TV channels - "Russia", NTV, Channel One, "Dozhd" and "Ren TV" - the Prime Minister are met on the outskirts of the studio.
“Please come in,” Dmitry Medvedev invites journalists into the studio.

Medvedev answers sharp questions in the framework of summarizing the results of the first half of the year for himself as head of the cabinet of ministers. Discussion topic - pensions. From the past of the government, Medvedev, as you know, demanded that he admit an error in the calculations in developing the pension reform. Kudrin answered in absentia to the prime minister: the ex-Minister of Finance refused to admit his mistake.

"If someone has doubts about the justice of the decisions made, then you can make a choice. You can criticize this or that system, but already outside the government. But there are no such people in the government now. Actually, the implementation of the pension system itself, which is proposed, not delayed. Decision-making on the accumulative element was postponed. A number of decisions concerning the future pension system have already been adopted and will be implemented, "the current Prime Minister assured.

The topic that today could not fail to appear is the terrible murder of the leader of the program “Vesti. Kabardino-Balkaria”. It is discussed throughout the country. Young and promising Kazbek Gekkiev, simply because he was a journalist, was shot on the way home from work.

“I would like the All-Russian State Television and Radio Broadcasting Company and in general to all those close to Kazbek Gekkiev to offer their condolences. What happened is a real threat, a threat of destabilization, which means that we still have a lot to do in order for peace and order in the Caucasus. The fact that an ordinary journalist perished in essence means that the gangsters turned to actions aimed at repressing ordinary people, not against law enforcement officers or government officials, but against ordinary journalists. to intimidate. And it is absolutely necessary that the investigation of this case be brought to an end, "Dmitry Medvedev stressed.

The question concerning another investigation is today, perhaps, on everyone's lips. Serdyukov was dismissed as a result of the verification of Oboronservis and a high-profile criminal case. Six people under arrest, they stole four and a half billion rubles, according to the most conservative estimates.

“Somehow there is no logic: on the one hand, they disgrace Serdyukov on television, on the other hand, they do not imprison him,” said Marianna Maksimovskaya, host of Ren TV, asking the prime minister.

“Do you think that if a person starts to be dishonored on television, should he be planted immediately after that?” Dmitry Medvedev was surprised. “I believe that no one has canceled the presumption of innocence. He didn’t even bring any charges against him. I think that Serdyukov as Minister of Defense worked very effectively. As for his involvement in the corruption scandal, the scandal around Oboronservis and so on, all this should be determined by the investigation. "

“You and I understand, there is always a certain set of conversations that people in this department or in this ministry are being stolen, or this official there is unclean,” Medvedev admitted.

"And how to cope with such reputational losses? They will still be?" - asked the presenter of the First Channel Irada Zeynalova.

“You know, some reputational losses must be incurred. There is nothing terrible in this, because all the time it’s impossible to say that we are white and fluffy,” noted Dmitry Medvedev.

The draft law on a sharp increase in fines for drunken driving and up to 500 thousand rubles is discussed separately: the law is personal, and as it seems to many, Medvedev’s ambiguous initiative.

"You recently entered the frame so effectively on a black BMW and offered to raise penalties for crimes committed by drunk drivers," the NTV presenter Alexey Pivovarov reminded the prime minister.

“The number of deaths on the roads, the number of people who died from drunk drivers, surpasses not that some of our ideas about it, it just looks absolutely monstrous,” the Russian cabinet minister estimated the situation. “Now regarding the size of the fine. I said : let's discuss it. I do not insist that the penalty be just that. But it must be weighty. So as to discourage the desire to get behind the wheel drunk. "

Typical questions for such situations - there are usually two of them: the relationship with the president and whether you are going for a second term - sounds only partially. TV presenter Maksimovskaya still asks about plans for the future.

“I’m not a very old politician yet,” Dmitry Medvedev laughs in response. “I have some kind of resource in time. Why should I close some opportunities for myself? This will be connected, firstly, with my personal desires in a specific moment and, of course, much more important, with people's ideas. Do they want this? I will be guided by this. "