December 11 2012
4
The B-57 Canberra was developed on the basis of the British electric bomber Canberra and is a tactical reconnaissance and bomber for the United States Air Force. The main American developer is the company Glenn L. Martin. Start of development - 1950-1951 year. The aircraft was assembled under license from the British company English Electric. The American version of the British bomber rises into the sky 20.07.1951 of the year. In total, the license was collected 403 "B-57 Canberra". In addition to supplies for its own air force, it was delivered to Taiwan and Pakistan. RB-57D reconnaissance aircraft were also created based on the B-57 Canberra. The main difference between the scout is the enlarged wing. Used to carry out reconnaissance missions over the territories of the Warsaw Pact states. 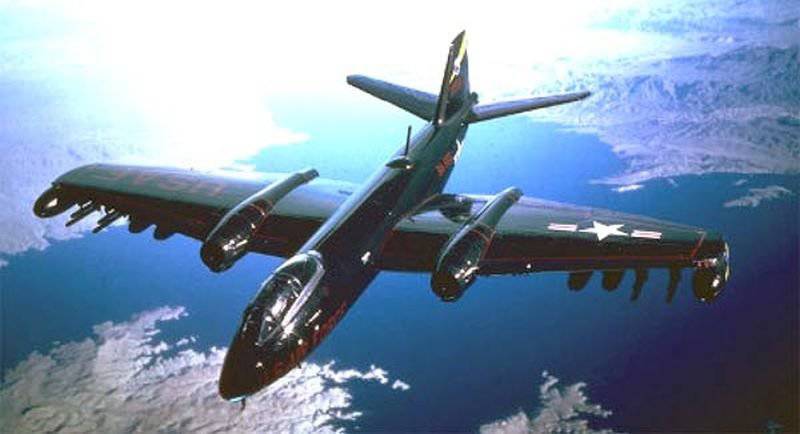 To replace the B-26 Invader bombers, which in the Korean War proved to be not the best side (age of aircraft), the United States Air Force decides to hold an urgent tender to adapt the already built aircraft that will perform its night tactical functions. bomber. And although the choice almost immediately fell on the British Electric Canberra aircraft, the military made a short list of pretender planes that could quickly replace the B-26 Invader bombers at the battlefield (Korean War):
- American North American B-45 Tornado. It was used by the United States Air Force as a tactical aircraft;
- American AJ Savage. It was used in the United States Navy;
- Canadian Avro Canada CF-100 Canuck. The aircraft was soon to enter service;
- British Electric Canberra. The aircraft was soon to go into service with the British Air Force;
- American Martin XB-51. Developed by Glenn L. Martin.

Due to the fact that many aircraft from the list were in development, it was decided to postpone the final selection of the aircraft to the end of 1950 year, in order to fully evaluate the aircraft for the required characteristics. 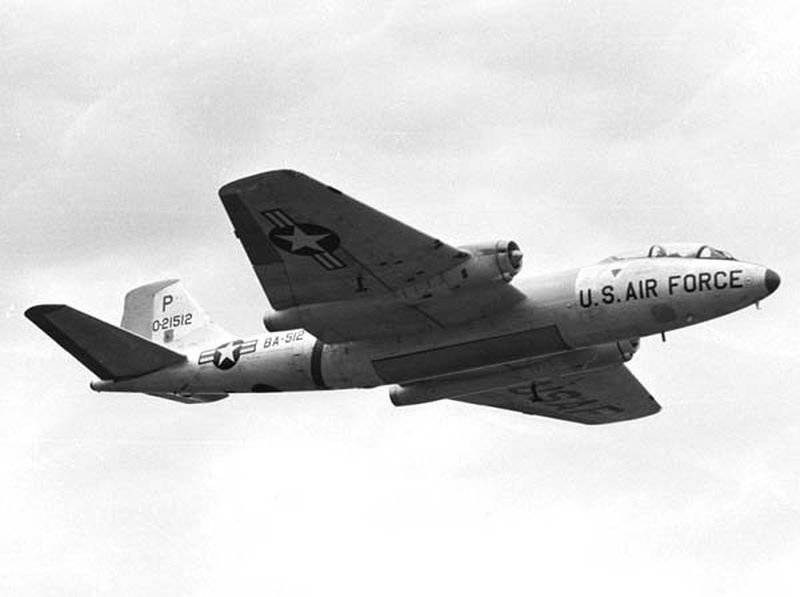 However, despite the decisions taken and the existing list of suitable aircraft, the established committee responsible for the final selection of the aircraft for the role of a tactical bomber, independently assessing the performance of all aircraft, decides whether to purchase the English “Electric Canberra”. In addition to the English aircraft, the XB-51 is also recognized as the best replacement for the B-26 Invader. British planes decide to equip 2 bomber air groups, after which the US XB-51 should have begun to arrive at the troops. Electric Canberra offered a contract to create a batch of aircraft in the amount of 300 units for the needs of the United States Air Force. However, the British company already had a large order from its own Air Force and its capacity did not allow to meet the needs of the United States Air Force. During the negotiations, an agreement was reached on the licensed production of British aircraft at the facilities of Glenn L. Martin. The new aircraft, which was to be assembled by an American company, receives the designation B-57 Canberra.

All other companies, whose planes were included in the list of candidate planes, were not informed of the negotiations held and the decisions taken on them. Therefore, the main tender for the replacement of the B-26 Invader bomber continued.

Flight tests of the candidate aircraft were postponed to 26.02.1951 of the year, due to the unavailability of Glenn L. Martin before the deadline to submit a ready-made version of the licensed aircraft B-57 Canberra.

According to the tender, the candidate planes were supposed to demonstrate the main characteristics of the aircraft and its control during 10 minutes. Although the B-57 Canberra presented the average performance during the demonstration, it was he who announced the tender winner in the early spring of 1951. Glenn L. Martin was given an order to assemble 250 night tactical bombers. The serial aircraft received the designation B-57A Canberra, which was a modification of the Canberra B. Mk 2 with the installed engine J65 (TRD Sapphire) of the American company “Wright Aeronautical”. 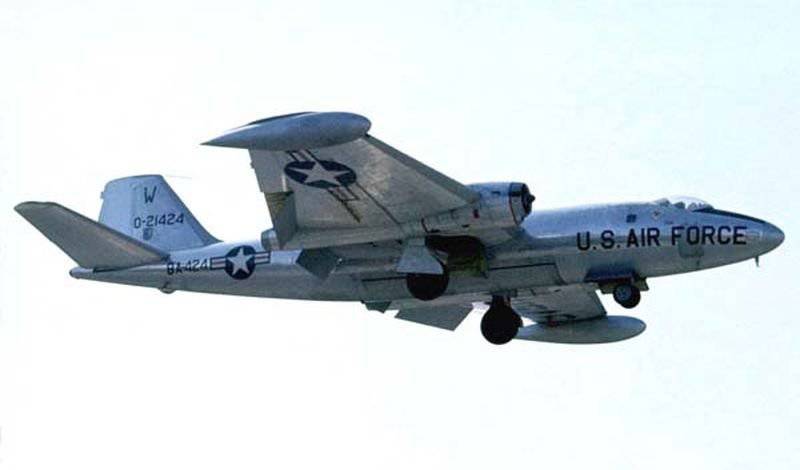 In the United States, as in any country, there are powerful industrial lobby that counteract the purchase of foreign technology. It did its best to lobby the order of the US military aircraft, in particular the HV-51. However, the Air Force did not suit the XB-51 on the characteristics of range and maneuverability.

The military was “forced” to require various changes in British aircraft to improve its performance and attract American companies, but this and one of the 2 British Canberra Mk 2 airplanes, the delayed release of American engines led to the first B-57A 20.07.1953's first flight of the year, and that is worse for the US military just a few days before the end of hostilities in Korea. For the first bomber release another seven B-57A.

The main differences from the Canberra Mk 57 B-2 include: 8 machine guns X-NUMXmm caliber made in the wing of the aircraft; 12.7 pylon located under the wing, etc. In addition to the serial release, work was constantly carried out to meet the requirements of the military, which they had previously put forward - improving the view from the cockpit to pilots when bombarded at low altitudes. In the end, the designers were able to achieve the desired, creating a cockpit with a tandem arrangement of pilots and new air brakes. From the ninth dozen, the aircraft is equipped with 4 4mm 39 guns instead of 20 machine guns with 8 guns.

The first 8 planes are designed as tactical bombers, the next 67 planes are designed as photo reconnaissance planes, which are called the RB-57A. Then again began to produce tactical bombers, which received some changes - this modification gets the name В-57В. It is the B-57B that is considered the basic (basic) version of the B-57 Canberra and the 202 units released them. At one time, 38 aircraft B-57B converted to TCB. It receives the name В-57С, which was distinguished by the presence of dual control. Next came from the factory RB-57D. This modification had an enlarged wing. Total released a small batch in 20 units. The latest modification is the aircraft B-57E. They were intended to tow targets. Glenn L. Martin has released X-NUMX B-68 units based on the B-57 modification. 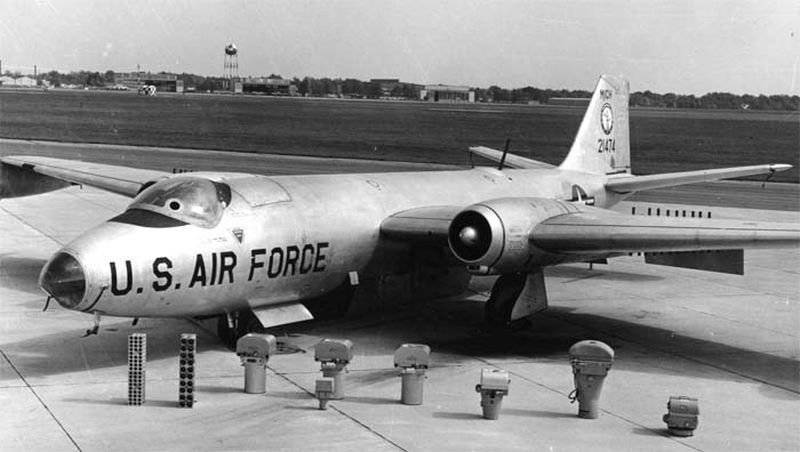 Participation in hostilities
The combat use of the B-57 Canberra begins on the 19.02.1965 of the year, when the planes of the third bomber group bombarded enemy positions near Saigon. It was the first use of jet tactical bombers for the United States Air Force. Until 1971, airplanes were used mainly for night bombardments of partisan bases and enemy communications.

The 1969 created a special modification of the aircraft on the project "Tropic Moon III", which were used in the last two years of hostilities in Vietnam called B-57G. Next, the aircraft began to slowly withdraw from the combat force of the Air Force, many of which were transferred to the National Guard under. The latest B-57 Canberra is being decommissioned by the Air Force in 1981. At one time, South Vietnam received about a dozen B-57 Canberra from the United States, and Pakistan received various 25 aircraft of various modifications.