Ukrainian naval aviation is difficult, but there are prospects

December 11 2012
11
Ukrainian aviation there are twenty years already. During this time, there were not only successes, but also failures. There were a lot of both. It makes sense to analyze what is happening in aviation at the present time, and whether it has a future ...

This year, Sea Breeze naval exercises were held in Ukraine, the main task of which was to work out actions to implement international security at sea, in particular, to fight against piracy. Those states that have certain problems in this regard, including Algeria, the United Arab Emirates, Qatar and Bangladesh, have joined the teachings. The total number of countries that participated in the exercise reached 16. And this includes both observers and direct participants, including the naval forces of Ukraine and the 6 American fleet.

Ukrainian naval aviation under the command of Acting Commander-in-Chief of the Ukrainian Navy, Vice-Admiral Y.Ilina, fielded Mi-14 and Ka-27 helicopters and Be-12 amphibious aircraft. The use of aircraft technology was carried out in conjunction with three hundred marines, six ships and 36 units of equipment. Thus, the total number of Ukrainian military personnel who participated in the exercises was 1300 people. The United States Navy was represented by the base P-2C patrol aircraft that are part of the Golden Eagles 9 Patrol Squadron deployed at Kaneohe Bay Air Base in Hawaii.

Most of the activities that were planned as part of the exercises were held in the Odessa region, as well as in the Black Sea, at the sites located in the north-western part of it.

Recall that Sea Breeze naval exercises are held annually, starting in 1997, as part of the Ukrainian-American defense cooperation agreement signed in 1993. As the commander of the 6th states fleet US Navy Frank Pandolf, the purpose of the exercise is to achieve regional security through cooperation in defense and security. According to his Ukrainian counterpart Yuriy Ilyin, modern military threats are the same for the whole world. And in order to ensure security in the region, the conduct of such exercises is simply necessary. 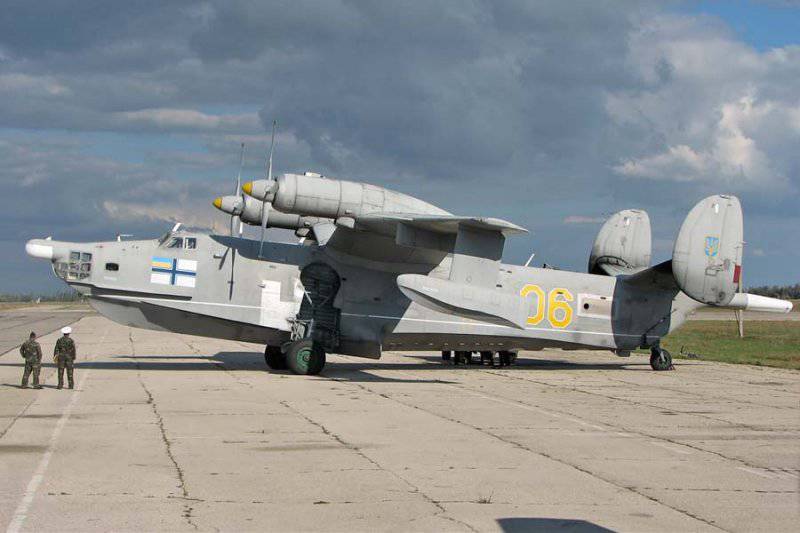 It is worthwhile to dwell in more detail on the military equipment that the Ukrainian side presented at the exercises. First of all, these are amphibious aircraft Be-12. Note that Ukraine is the only state other than Russia that continues to use this type of technology. This equipment began to be supplied to the Soviet troops in the early 60s of the last century. Then the aircraft were used for marine patrols. Officially, the Be-12 was adopted only in 1968 year. Initially, the main purpose of using amphibians was to conduct anti-submarine defense in the coastal zone, but later these aircraft were converted to search and rescue.

These aircraft went to the Ukrainian aviation after the collapse of the Soviet Union. At that time, there were three Be-12 airplanes on the territory of Ukraine, which were based in Nikolaev. After, when the agreements on the division of the Black Sea Fleet were signed, Ukrainian naval aviation received another 1 Be-12PS and 10 Be-12PL, but they were not armed. Then it was not possible to arm them, because in the 33 pulp and paper industry there were only training units in which there were no combat kits for all the equipment. If we talk about the capabilities of such aircraft, then they no longer fully meet the requirements of anti-submarine warfare in modern conditions. In addition, their search tools cannot provide a high percentage of accuracy in locating boats under water for the purpose of further use. weapons.

Of course, in such a situation, a rather natural question cannot arise: why does Ukraine need such aircraft that do not meet modern requirements due to the lack of weapons and new equipment? The answer is very simple: there are simply no other anti-submarine aircraft in sufficient quantities. And there is no point in setting up our own serial production and allocating large sums of money, because creating an anti-submarine aircraft for a closed sea zone, covering an area of ​​423 thousands of square kilometers, is economically unprofitable, since the entire 10-12 of such aircraft will be enough for the Ukrainian Navy. At the same time, it is practically impossible to buy foreign-made anti-submarine aircraft for the Ukrainian military, because, for example, the cost of one Atlantic aircraft is more than 50 million dollars. Moreover, they need to additionally purchase means of destruction and search, spare parts and operational equipment.

In such conditions, the best option would be to resume the production of search and defeat weapons for the Be-12 aircraft. But it turns out, and this is impossible, because many components for them are not made more than 20-30 years.

In this situation, the only possible option is to upgrade the Be-12 with new equipment and weapons, especially since these planes have good ability to modify. Inside the plane there is a lot of free space, so you can place a completely modern anti-submarine complex there. Thus, according to experts, in order to increase the capabilities of the Be-12 in terms of identifying objects, targeting and using weapons, it is necessary to replace the Initiative-2B radar with a modern station. Replacing outdated torpedoes and increasing their number to 4-6 due to the small mass will provide an opportunity to improve the accuracy of destruction of objects.

It is also important to note that in Ukraine there are all possibilities for the modernization of the Be-12, because the repair of this equipment has been successfully and quite successfully engaged in repairing Evpatoria for a long time. If we talk about the means of search and detection, in the past, Ukraine occupied leading positions in the production and development of hydroacoustic buoys, which even now are superior to Western models in some of their parameters - RGB-15, RGB-75, RGB-16, RGB-55, RSL-25.

The situation with the provision of the Be-12 with modern types of weapons is somewhat more complicated. Depth charges, which are used to destroy submarines, are so ineffective that you should not even talk about them. At the same time, it is inexpedient to set up production of aviation and sea torpedoes, because there is a possibility that orders for them will be very small. It remains only to buy. There is a Russian torpedo UMGT-1, as well as an APR-2 rocket-torpedo, but their weight is quite large for this aircraft, and they are expensive because of a silver-based power source. Because you need to look at the cheaper and easier torpedoes Mk-46 and Mk-50. The same applies to anti-ship missiles. Rockets like “Harpoon”, “Exochet” are also more expedient to buy in the West, because there are no such universal and at the same time small-sized missiles in service with the neighboring Russia. 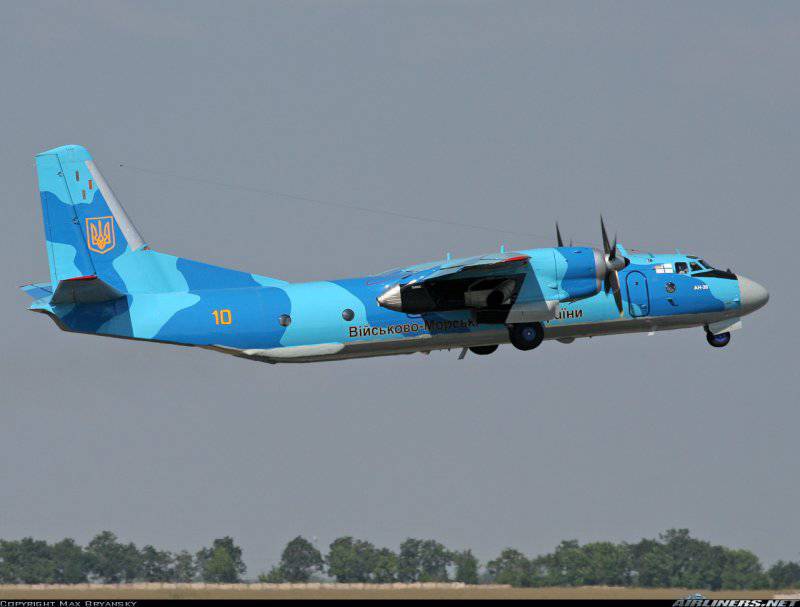 Anyway, Ukraine expects to use the Be-12 for at least another six years, after which An-26 military transport planes should replace them. Currently, two such aircraft are in service with the Ukrainian troops. This type of equipment was developed at the Antonov Design Bureau. It is intended for transportation and landing of cargo, people and small-sized equipment at a distance of 2 thousands of kilometers. It was created on the basis of the passenger An-24. This aircraft has a high take-off and landing characteristics, so that it can be used all year round at airfields of relatively small size. Currently, An-26 is in service with the states of the CIS, and is also actively used in 26 in other countries. This aircraft was also used during the fighting in Afghanistan. 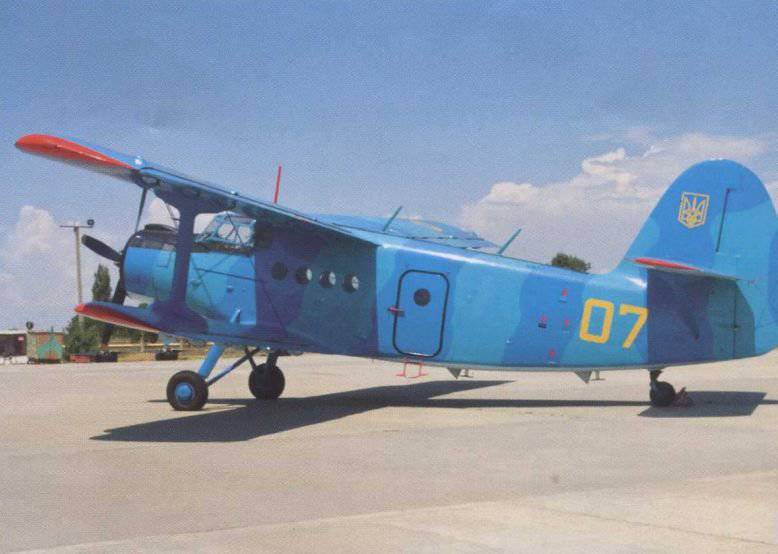 As for the data of the Ukrainian aircraft, they were reequipped according to the type of amphibious aircraft Be-12 and can use the dumped rescue inflatable boat. There are in the Ukrainian Navy and An-2, the record for the duration of the release, because the first model was produced in 1947 year. Previously, it was produced in the Sovestky Union and Poland, now produced in the PRC. In the 2012 year, more than X-NUMX An-2200 aircraft were in operation around the world, of which more than 1,500 were in Russia. As for Ukraine, there is only one "corncob" in service. It is used as an inexpensive means of training parachutists. 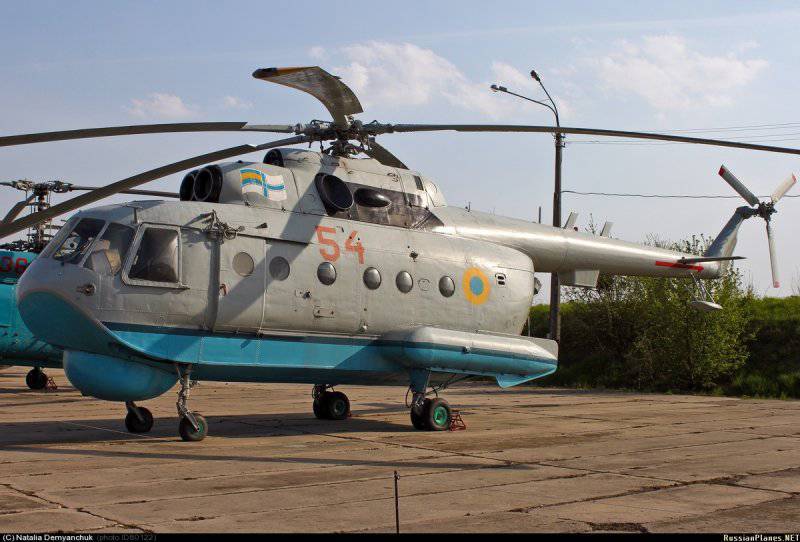 The amphibious helicopters Mi-14 and Ka-27 are in service with Ukrainian naval aviation. The Mi-14 helicopter was created on the basis of the Mi-8 amphibious helicopter, which proved to be quite good. The Mi-14 can patrol water expanses for many hours, being far from the base. There are several modifications of this technique. In the arsenal of Ukrainian aviation is the Mi-14PL, which is designed for magnetic and radio-acoustic monitoring of water space, the detection of submarines and determine their location. 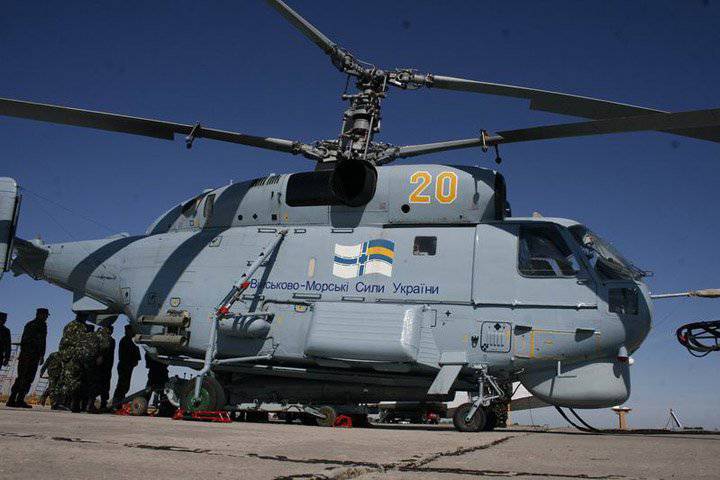 Ukrainian Ka-27 is presented in two versions - PL and PS. Ka-27 PL is designed to destroy nuclear submarines and surface ships. He is able to detect targets at a great distance from the home vessels. The export version has the designation Ka-28 and has certain differences in terms of weapons and equipment. The Ka-27PL is a new generation search and attack helicopter that succeeded its predecessor, the Ka-25PL.

Both Mi-14 and Ka-27 are being repaired and serviced at Sevastopol ARZ. In order to increase the service life, both of these helicopters underwent a process of modernization, as a result of which new radio stations were installed on them, among other equipment, which greatly improved the quality of communications with NATO troops in the process of peacekeeping operations.

If we talk about aviation bases that currently exist in Ukraine, then since 2004, the only such place is the air base in the city of Saki. Be-12 from Nikolaev, the 555 th anti-submarine helicopter regiment from Ochakov were transferred here. In October 2008, all these parts were merged into a naval air raid. In the same city there is also a center for training pilots of carrier-based aviation, which is known as NITKA. Ukraine received this center after the division of the Black Sea Fleet. Currently there are Russian Su-25UTG and Su-33 stationed there. Russian pilots have permission to conduct training at the center. However, apparently, the Su-33 will soon be withdrawn from the center, and their place will be taken by Indian MiG-29K. In addition, there is the possibility that Chinese pilots of carrier-based aviation will also be trained here. 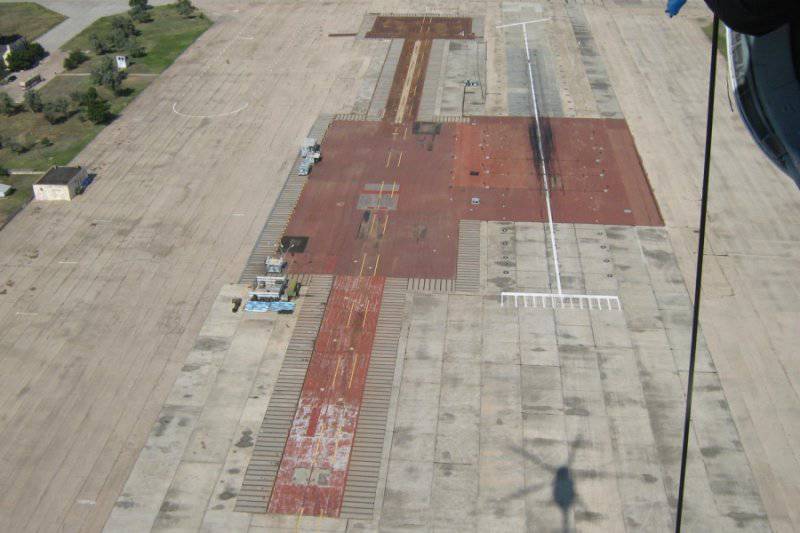 As for the center itself, it was actively operated in the 70-80-ies. So, the first take-off from the springboard here was made by the MiG-29K fighter in the 1982 year. The first landing of the Su-27K took place two years later, in the 1984 year.

After the collapse of the Union and the division of the fleet, three regiments of long-range bombers Tu-16K and Tu-22М2, one reconnaissance regiment Tu-22Р, and in addition, various units on the Su-25, MiG-29 and Be-12 became part of the Ukrainian armed forces.

By the time the USSR “sunk into oblivion”, MiG-29K, Yak-38, Su-25UGT aircraft were based in the town of Saki, the Center for Flight Training and Combat Use Training was located in Nikolaev, armed with the Be-12 and Tu -22М2. The center included the 555 th separate helicopter anti-submarine regiment, which was engaged in retraining the pilots for the Mi-14, Ka-29 and Ka-27 helicopters.

Later, a significant part of these units came under reduction, and the equipment was disposed of (in particular, Tu-22P, Tu-16K, Tu-22М2).

The last Ka-25 units also fell under reduction and were decommissioned in 1994, at the same time a large number of Be-12 and Mi-14 were reduced, and the naval Su-25 and MiG-29 fell into the Ukrainian air force.

All of them require timely repair and modernization, and, consequently, significant funding. If such funding will not be provided, then such concepts as protecting the interests of the Ukrainian state and ensuring security in the Black Sea region will become purely nominal concepts ...