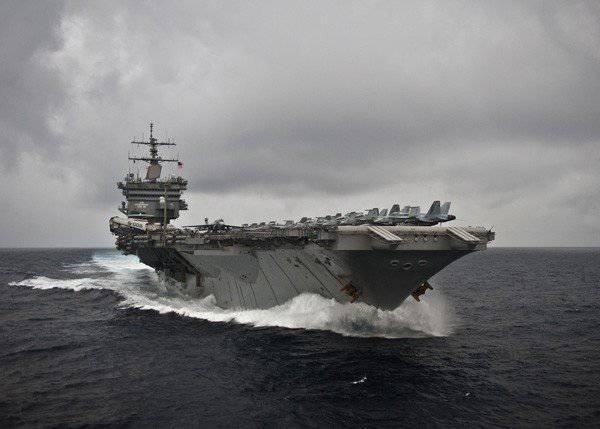 1 December 2012 held a ceremony to deactivate the “nuclear heart” of the mighty aircraft carrier Enterprise, at the Norfolk Naval Base (Virginia). Fifty years of service in the name of democracy, flew like one day - and behold, the 340-meter-long ship froze at the quay wall.

From March to November 2012, the Enterprise made its last combat trip to the Persian Gulf zone. Alas, the interesting conspiracy hypothesis of bringing the old ship as a pretext for an attack on Iran was not confirmed - the carrier group had completed tasks in the Arabian Sea and returned safely to Norfolk.

Even when approaching the shores of North America, right in the open ocean, the operation to unload ammunition began: during the day and night for several days, elevators raised thousands of ammunition to the flight deck, which then, using helicopters, were delivered to the vehicles going abeam the Enterprise supply. 1260 helicopter flights were required to empty the giant cellars of the old aircraft carrier. At the moment, nuclear fuel is being unloaded from eight reactors of the aircraft carrier Enterprise: huge technological holes are ruthlessly cut out in its powerful casing to extract the reactor compartments as a whole.

An unarmed and stationary ship will be part of fleet at least until mid-2013. Only after the launch of the new nuclear carrier “Gerald R. Ford” will the official ceremony of removing the Enterprise from the Navy take place. In the career of the world's first nuclear-powered aircraft carrier, the final phase will begin: the cutting of the ship for metal will begin. Enterprise recycling should be completed by 2015.

The proposal to turn the Enterprise into a floating museum did not receive support: too expensive, difficult and unsafe. The only thing that can be preserved from the old aircraft carrier is its superstructure - the “island”, which is planned to be installed on the coast as a memorial.

Life and death of the strike aircraft carrier

The "Enterprise" (respectfully referred to by the sailors as the "Big E") was a kind of landmark ship in the sea stories - the first atomic aircraft carrier, laid down in 1958, turned into a global scarecrow for many decades, personifying American ominous with its sinister and fantastic appearance.
The very first combat mission of the Enterprise almost put the world on the brink of a nuclear catastrophe. During the blockade of Cuba (Caribbean crisis, 1962), the newest atomic aircraft carrier was one of the "trump cards" of the Pentagon.

Taking advantage of the worldwide popularity of the Enterprise, the Americans tried to maximize their super-ship: 31 July 1964 of the "1" Rapid Connection as part of the atomic carrier "Enterprise", the atomic cruiser "Long Beach" and the Atomic Cruiser " Bainbridge. The purpose of the operation "Marine Orbit" * was circumnavigation to demonstrate the capabilities of the US Navy and the intimidation of all geopolitical opponents. Over the 65 days of the Around the World, the squadron passed 30 thousands of nautical miles, making calls to the ports of Karachi (Pakistan), Sydney (Australia) and Rio de Janeiro (Brazil).

* Repetition of the propaganda around-the-world campaign of the American battleship 16 (1907-1909). 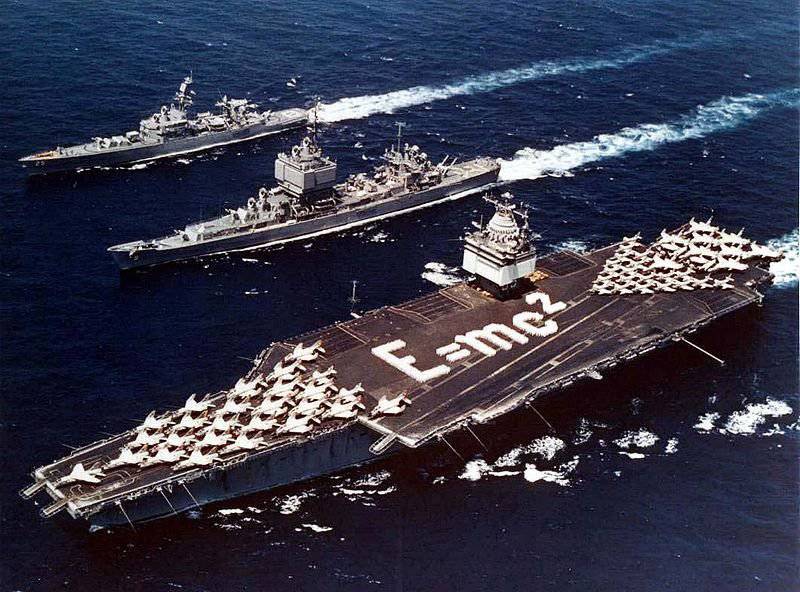 Around the World in 65 Days. Top down: Bainbridge, Long Beach, Enterprise
On the account of "Enterprise" - the quintessence of all the advanced scientific achievements, there were many other world records:

- the first nuclear aircraft carrier in 60-ies retained the title of the largest ship (full w / and Enterprise 93 thousands of tons),
- A phased-array radar (SCANFAR) first appeared on the Enterprise,
- first ship, with pure aviation weapons (cost overruns forced designers to abandon any self-defense systems, only in 1967 the first Sea Sparrow air defense systems were installed on the ship)
- the largest number of nuclear reactors — as many as 8 units — is installed onboard the Enterprise (a dubious achievement, which only speaks about the imperfection of nuclear technologies in the 50s),
- the first nuclear-powered ship to take part in the hostilities,
- in December 1969, during the Vietnam War, the aircraft from the aircraft carrier "Enterprise" set an unbroken record so far by completing 178 sorties in 24 hours,
- the longest service in the current fleet (51 year),
- Finally, the Enterprise is the first of the nuclear giants of the aircraft, which must undergo a process of disposal.

Vivid everyday life hides behind bright highlights and interesting technical details: a bloody trail stretches behind the Enterprise across the globe. Vietnam, Iraq, the tanker war and the pogrom of the Iranian fleet (Operation Mantis), the Philippines, the Balkans, Afghanistan ... the schedule of military campaigns was so intense that the active reactor zone burned out in two years instead of the planned 13 years of operation.
Alas, none of the victims managed to get even with his abuser - the Enterprise bombed them all and quietly rested in fame and prosperity. 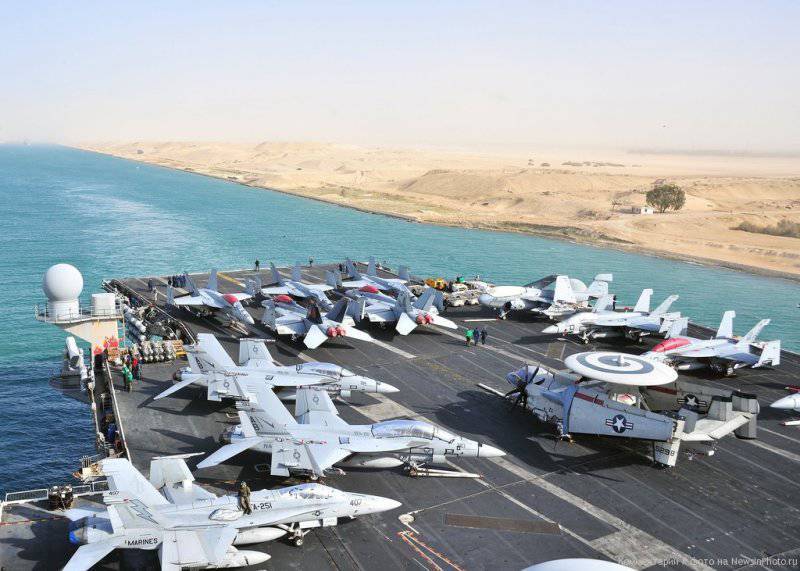 However, Enterprise itself once got its revenge on Nature itself for all of its vile deeds: 14 January 1969, the newest super-aircraft carrier almost burned off the coast of Hawaii. The plot is simple: a carelessly parked tractor with an auxiliary power unit caused heating of the ammunition suspended under the wing of the Phantom, ready for departure. Bah! This detonated 127 mm rocket "Zuni", all the feed "Enterprise" in a flash turned hellish inferno. 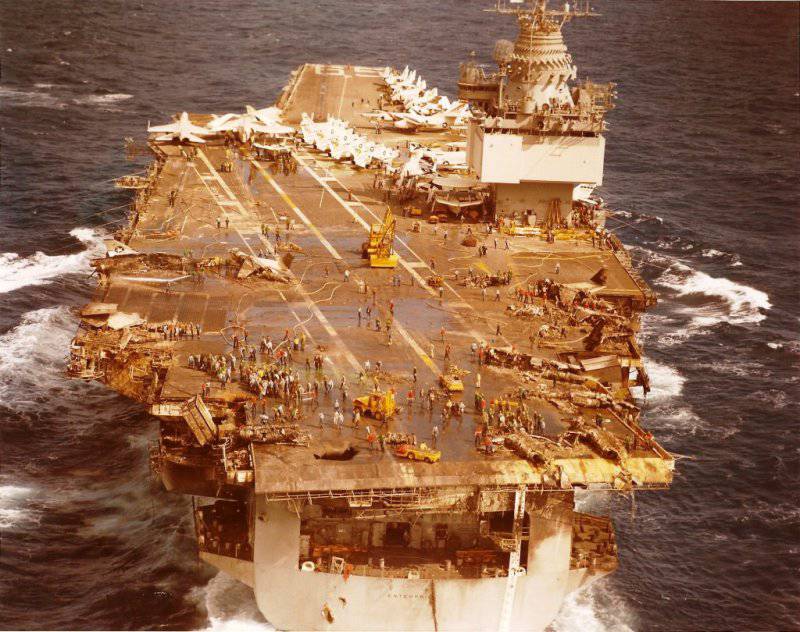 American sailors puzzled to view the ship’s burnt stern
Under the crash of detonating bombs and flash fireworks from flying shrapnels, the crew rushed to extinguish their ship. As it was established later, 18 explosions thundered on the deck (including eight 227 kg bombs and several tens of aviation kerosene were detonated)! Through the holes in the armored flight deck, the flames descended into the hangar, where more than three hours were raging - from many planes only the refractory elements of the engine structure remained.
The accident killed 27 sailors, 300 were injured and burned. The fire destroyed 15 aircraft, another ten cars were damaged. The explosions seriously damaged the structure of the flight deck, the repair of the Enterprise lasted a whole month.

The current "Enterprise" (operational code CVN-65) - the eighth warship in US history with this name, was in turn named in honor of the hero of World War II, the heavy aircraft carrier "Enterprise" (such as "Yorktown").
1 December 2012, during the ceremony of deactivating the aircraft carrier Enterprise, Minister of the Navy Ray Mabus announced that his name, according to tradition, will go to the future aircraft carrier CVN-80 (Ford type). The statement was greeted with applause.
As a testament for the crew of the future Enterprise, the sailors of the current ship prepared the 200-pound time capsule, which will be built into the design of the new aircraft carrier. There are notes, souvenirs, wishes, particles of the hull of the old ship. Whatever you may say, the carrier carrier “Daring” (this is how the Enterprise can be translated) has beautifully ended its life.
Now the number of US aircraft carriers has decreased to 10 units, and this situation will continue until the 2015 year. 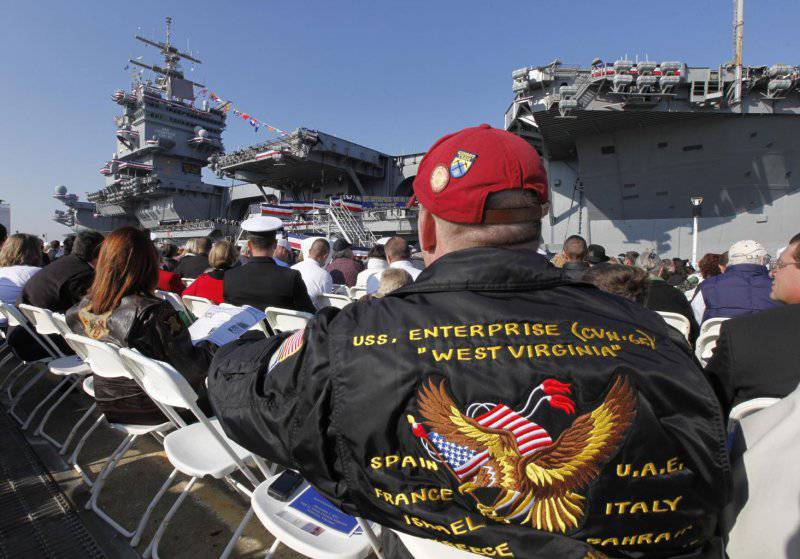 A couple of photos from the deactivation ceremony 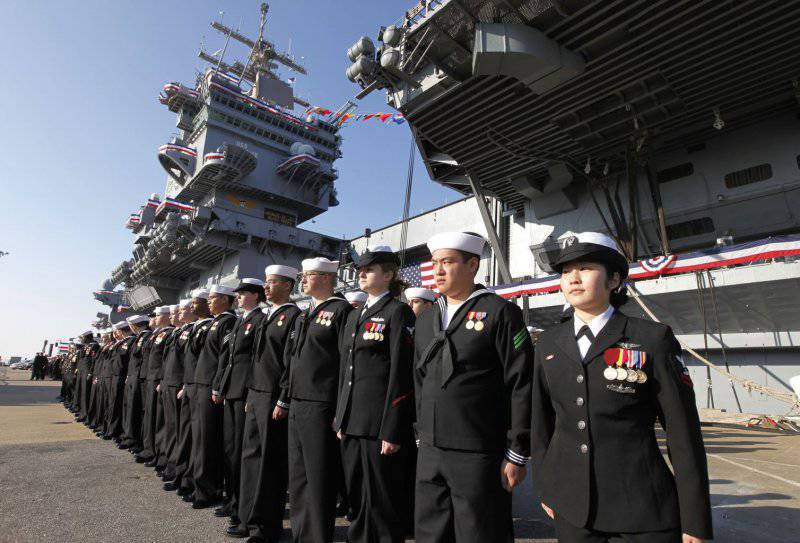 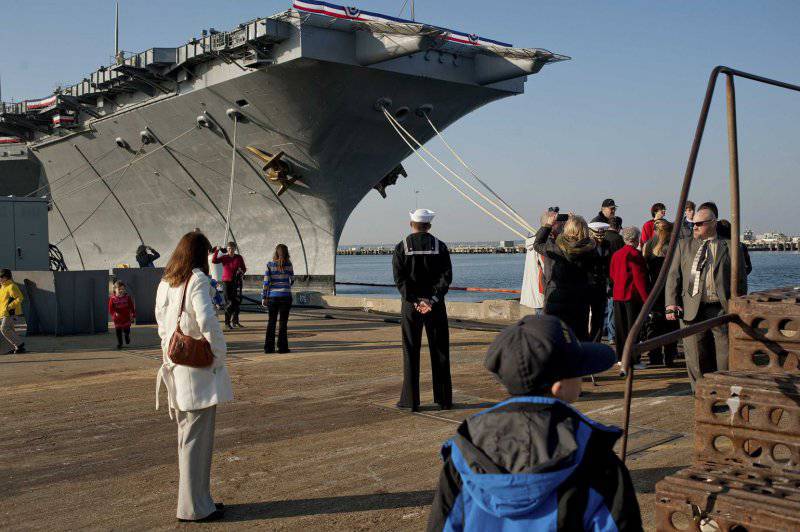 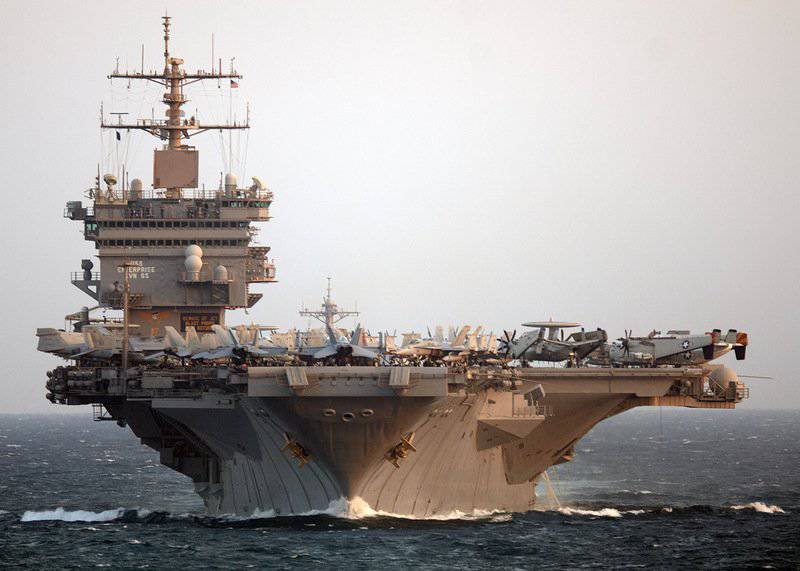 You know what a guy he was!