The world's first underwater mine layer "Crab". Part 2. The second and third options for underwater trap

December 10 2012
0
After MTK chose the system of “fodder external apparatuses”, MP Naletov, taking into account the comments of the committee members, a second version of the underwater mine layer with a displacement of 450 tons was developed. In this variant, the length of the submarine increased to 45,7 meters, surface speed - to 10 nodes, and the navigation area at this speed reached 3,5 thousand miles (instead of 3 thousand miles according to the first option). When diving speed was 6 nodes (in the first embodiment - 7 nodes).
With two mine tubes, the number of mines with the “anchor of the Naletovo system” increased to 60, but the number of torpedo tubes was reduced to 1. The time of setting one mine was 5 seconds. If in the first version of the underwater mine layer, it took about 2-3 minutes to set one mine, then this is considered a great achievement. The deck hatch over the waterline rose to a height of about 2,5 meters, and the reserve buoyancy - 100 tons (22%). True, the transition time between surface and submerged positions was still significant - 10,5 min. 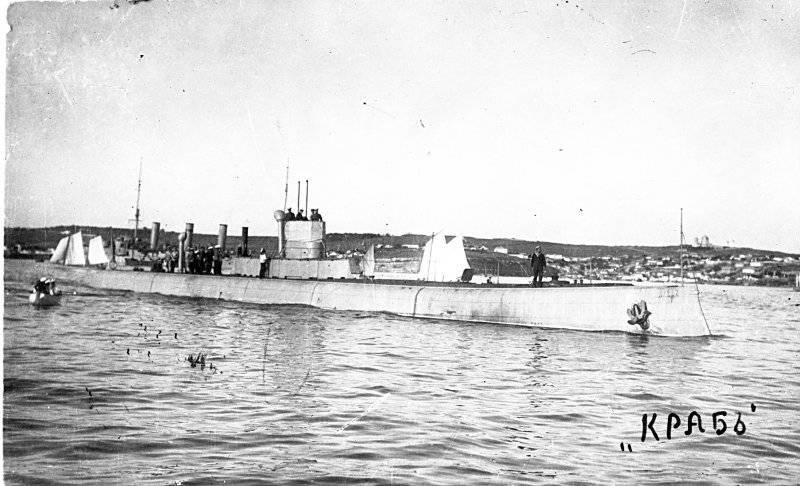 1 May 1907, Rear Admiral Virenius AA, Acting Chairman of the MoTC, and Rear Admiral Loschinsky MF, Acting Chief Inspector of the Mine Case, in spec. report addressed to the Minister of Marine on the project of the underwater mine layer Naletov MP wrote that the MTC "on the basis of checking the drawings and preliminary calculations found it possible to recognize the draft minelayer as feasible."
The report further suggested that an agreement be signed as soon as possible with the head of Nikolaev shipbuilding plants, or rather, the Society of Shipbuilding, Mechanical and Foundry Plants (Nikolaev), who, as reported by 29 in March 1907 of the year Naletov, were granted “the exclusive right to build underwater mine-laying systems Naletova, or sign an agreement with the head of the Baltic Shipyard, if the Minister for Maritime Affairs finds this useful. ”
The report also said: "... at the same time it is necessary to attend to the development of special mines, at least according to the project of the captain of the second rank of Schreiber."
The latter causes some bewilderment: after all, Naletov MP not only was the project of the minelayer as a submarine presented, however, mines with specials. an anchor So what have the second rank captain Schreiber?

Shreiber Nikolai Nikolaevich was one of the prominent mine experts of his time. After graduating from the Naval Cadet Corps and later the mine officer class, he mainly sailed as a mine officer on the ships of the Black Sea fleet. In 1904, he held the position of chief mineral in Port Arthur, and in 1908-1911, he was an assistant to the chief mine inspector. Probably, under the influence of the invention of M. Naletov he, together with the ship engineer I.G. Bubnov and Lieutenant Vlasyev S.N. started developing mines for an underwater mine layer. He used the principle of zero buoyancy, that is, the same principle that M.P. applied A raid for their mines. For several months, until Naletova was removed from the construction of a mine layer, Schreiber tried to prove that the mines and the system for setting them from the mine layer that were developed by Naletov were unsuitable. Sometimes Schreiber’s fight against Naletov was of the nature of petty nit-picking; he even sometimes gloatedly emphasized that the creator of the protector was only a “technician”.
The Deputy Minister agreed with the proposals of the Chairman of the MTC and ordered the head of the Baltic Shipbuilding Plant in St. Petersburg to develop a device for setting 20 mines from the Akula submarine (displacement 360 tons) being built at this plant, and also to give his own opinion on the cost of the submarine minelayer Naletova (displacement 450 tons). 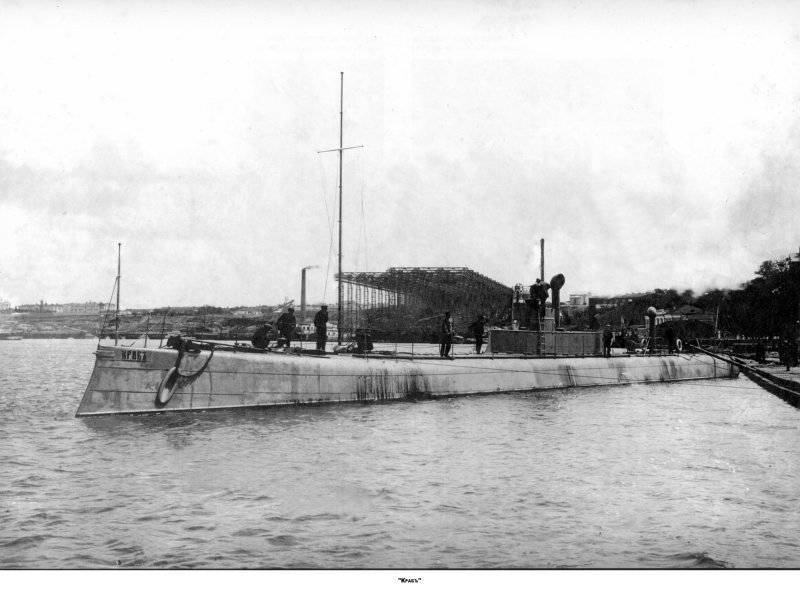 Along with the mine manager from the submarine with a displacement of 360 tons, which was built at the Baltic plant, the plant presented two options for the 60 mines "system of the captain of the second rank Schreiber" with a displacement of about 250 tons. At the same time, one of the options presented indicated the surface speed, which was 14 nodes (!) Leaving the Baltiysky Zavod conscience, the correctness of calculations of the abuser with a displacement of about 250 tons with 60 mines. Note that the two small submarine minelayers started in the 1917 year, with a displacement of 230 tons, had only 20 mines.
In the same letter dated 7 in May 1907, the head of the Baltic plant at MTC said: “As for the number in 450 tons (we are talking about the version of the project of minelayer Naletov MP) indicated in relation to MTC, it is not justified by the tasks and even approximately determine the cost of a submarine, where about half of the displacement is spent uselessly (?) impossible. "
Such a harsh "criticism" of the mine layer project in 450 tons, obviously, was given not without the participation of the author of the "mine system" captain second rank Schreiber.

Since the construction of the submarine in 360 tons by the Baltic plant was delayed (the submarine was launched only in August 1909 of the year), the preliminary testing of the device for laying mines on this submarine had to be abandoned.
Later (in 1907 year), Naletov developed a new version of the minelayer with an underwater displacement of 470 tons. In this variant, the overwater speed of the barrier was increased from 10 to 15 nodes, and the subsea speed increased from 6 to 7. The dive time to the positional position decreased to 5 min., To the underwater position - to 5,5 min. (in the previous version of 10,5 min.).
The Nikolaev 25 plant on June 1907 of the year presented to the chief mine inspector a draft contract for the construction of an underwater mine layer and the most important data on specifications, as well as two sheets of drawings.
But the Marine Ministry acknowledged that the cost of construction of the minelayer should be reduced. 22 August 1907 of the year, as a result of further correspondence, the plant announced that it agreed to reduce the cost of building one underwater mine layer to 1,35 million rubles, however, provided that the displacement will be increased to 500 tons.
On the orders of the Minister of Maritime Affairs, the Marine Technical Committee informed the plant of the agreement with the cost of construction of the minelayer proposed by the plant "... because of the novelty of the case and the free transfer of mines developed by the plant." At the same time, the committee requested the plant to submit detailed drawings and a draft contract as soon as possible. It was indicated that the submerged speed should not be less than 7,5 nodes within four hours.
The 02.10.1907 specification with drawings, as well as the draft contract for the construction of the mine underwater minelayer system Naletova MP with a displacement of 500 tons "were presented by the plant.