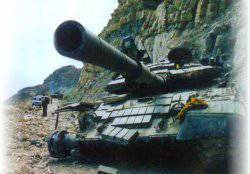 The average Russian citizen judges the Chechen war only by publications in newspapers and television reports. Unfortunately, in most cases only a small part of what is actually happening in Chechnya is made public. The complete picture of the Chechen war is known only to those who have been there and have experienced the charms of the anti-terrorist operation on their own skin. Timur Soldatov was a simple tanker and traveled the rebellious republic up and down. The difficult fate of the army threw our countryman into the thick of it - as many 12 times as his fighting machine was hit by militants. For his military work, Timur was awarded a soldier's reward - the medal "For Courage".

In early January, a column of Russian troops 2000 reeled kilometers of Chechen roads onto tracks. The infantry armor of the BMP-2 was pressed against the motorized infantry to each other. And although winter in the North Caucasus is milder than in central Russia, riding a vehicle is not a pleasant pleasure. It's cold, and at any moment the guys can be covered with lead rain. But hiding inside the car is even more dangerous - a bomb explosion and it will turn into a pile of twisted iron. No wonder that the BMP was deciphered as a "mass grave of infantry." T-72B tank of our countryman closed the column. Molded with small boxes of dynamic protection, the “seventy-two” looked like a prehistoric lizard. The multi-ton hulk seemed to sniff out the lurking Chechens with its long barrel. But militants were taught the art of disguise by foreign Afghan and Arab advisers. None of our ambush noticed. 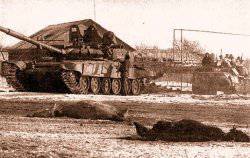 The monotonous clang of caterpillars and the roar of engines broke the rumble of shelling. As Timur recalls, several rocket-propelled grenades fell into the tank. The Ural armor withstood the first blows of PG-7, but then the car still crashed. The main part of the enemy fire took over the engine. Only then they counted six hits. Now many domestic abuse Tanks. But according to Timur, the fact that he survived this war is a merit of tank builders from Nizhny Tagil. Of course, the places from where the fire was fired were retaliated. But it was difficult to judge its results. The militants seemed to dissolve in the air. And in our ranks such a sortie only increased the number of losses. The soldiers admit that out of 400 fighters of the battalion they returned absolutely unscathed about fifty. And so hatred for the militants was such a fierce one.

Especially not stand on ceremony with any kind of mercenaries. And among them many brothers of Slavs from western Ukraine came across. They savages fanatics were closer than the Russians. Not done in the second war, and without female snipers. Some of them were notable for being too talkative, and when they went on the air, they launched revelations about their hard share of hired killers. Probably, they still tormented conscience.

And although in the days of the most intense fighting in Chechnya, the almost 100-thousand Russian group was fighting, it happened that our people were surrounded. Since January 16, the militants have attacked the roadblock, where the Soldiers were, for almost two days. This small camp was like a bone to the insurgents. But their fierce attacks met with no less fierce resistance. In the end, help came. Three defenders were injured and one was missing. 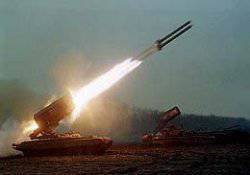 The most difficult, according to Timur, for their part was the battle near the village of Komsomolskoye. It found its end a gang of militants numbering almost a thousand people. Ours have quit for the atrocities in the peaceful Russian cities and for the bitterness of the stolen victory in the First Chechen. The feds did not hesitate to use thermobaric ammunition (volumetric explosion). The 9M114F missiles of the Sturm complex with a high-explosive fragmentation warhead and TOS-1 heavy flamethrower systems with the somewhat frivolous name Buratino showed themselves to be especially good. Therefore, the streets of the village were literally littered with corpses. In the last war there were a lot of complaints about the interaction between the Russian army and the internal forces. In this company, according to Timur, everything was much better. Security forces tried to help each other when it was necessary.

During one of the battles, the Soldiers received a serious shrapnel wound. And fight again. This time for their health. And no longer on the battlefields, but in the silence of the hospital wards and in the sterile cleanliness of the operating rooms of the military hospital. And Timur emerged victorious from this battle. He managed to defeat a difficult illness and returned to the ranks.