December 6 2012
68
MiG-29 front-line fighter (9-12 product, according to NATO classification: Fulcrum is a fulcrum) is a Soviet / Russian multi-purpose fighter belonging to the fourth generation. It was developed in OKB MiG. The aircraft was developed in the early 1980-ies, he opened a new era in the development of light fighters. The MiG-29 became the first aircraft of this class in the world, which combined unsurpassed efficiency in maneuverable air combat, as well as the ability to attack enemy aircraft with medium-range missiles. The aircraft was designed to destroy all the types of air targets from various types of airborne cannons and guided missiles in a variety of meteorological conditions both in free space and against the background of the earth, including in terms of jamming. Also, the fighter is able to hit various ground targets.


For training and training of future pilots on the basis of a single model, a two-seat combat light combat fighter MiG-1985UB was mass-produced from 29. In this case, the on-board radar was not installed on it, but for testing the use of controlled weaponsequipped with radar homing heads, special imitation modes were provided. When designing the aircraft in the OKB MiG, it was possible to design a very high potential for improving the aircraft, which made it possible in the future to create a number of promising options for its modernization both in the interests of the Russian Air Force and in the interests of exporting countries.

A total of about 1600 MiG-29 fighters, which are in service with the Russian Air Force, as well as 28 countries of the world, were produced. Currently, RAC "MiG" continues to work on the serial production of improved versions of the MiG-29, including the MiG-29SMT and the upgraded MiG-29UB. In the interests of various kinds of customers, comprehensive programs for the modernization of MiG-29 fighter jets are being created and successfully implemented. These programs can improve the efficiency of fighters and reduce the cost of their operation. 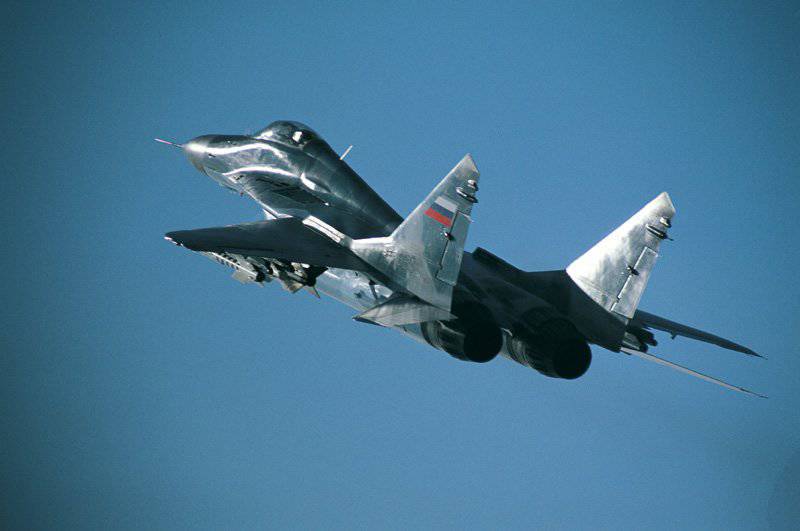 MiG-29
One of the latest modifications of the aircraft designed for export is the version of the MiG-29UPG (9-20). This is a modernization of the MiG-29B fighter, which was carried out in the interests of the Indian Air Force. This upgrade involves the installation of an additional conformal dorsal fuel tank, as well as equipment to refuel the aircraft in the air. More advanced RD-33М-3 engines, gun control radar Zhuk-M2E, the inertial navigation system of the French company Thales, the optical system OLS-UEM, and the on-target targeting system made by the Israeli company Elbit are installed on the fighter. In addition, the fighter’s radionavigation systems were updated, and the cockpit received new multi-function LCD displays. The range of fighter weapons used will be expanded with X-29T / L, X-31А / П and X-35 missiles. Its first flight MiG-29UPG performed 4 February 2011 of the year.

The unsuccessful marketing policy of the management of the MiG company, which was generated by high expectations after signing a phenomenal Malaysian contract in 1994 and focused on completely unrealistic price characteristics, led to the fact that in the second half of 1990, the company was able to conclude only 2 small contracts first for the supply of 3 fighters in Peru, and after another 8 fighter - in Bangladesh. It turned out to change the situation only with 1999, with the support of the Russian government and the new leadership of MiG, headed by Nikolai Nikitin. First of all, the efforts of the new management of the enterprise were aimed at activating corporate construction. At this time, a vertically integrated company was created on the basis of fragments of the MIC “MAPO”, which received the designation RSK MiG - “Russian Aircraft Corporation“ MiG ”.

All this made the innovation process in the enterprise more dynamic: it was possible to accelerate the work on designing new versions of the MiG-29 fighter, first of all, the MiG-29CMT and MiG-29K versions. In addition, RAC "MiG" was able to conclude a number of contracts that allowed the enterprise to gradually resume production and at least partially finance R & D. 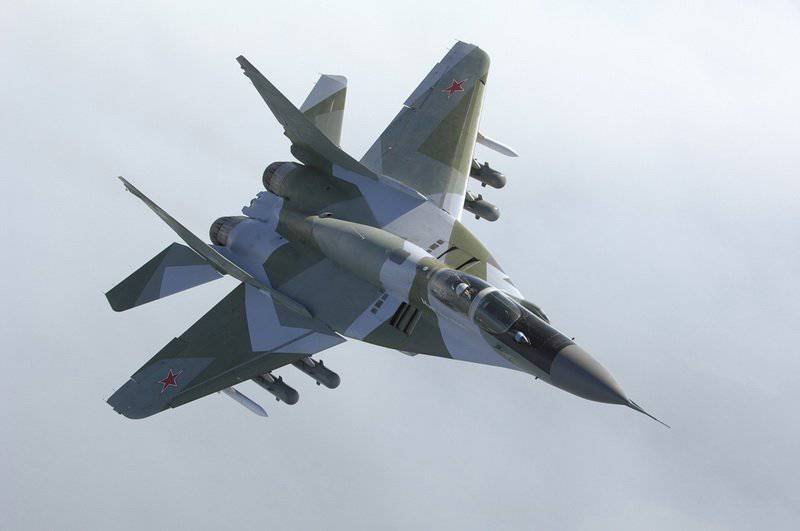 In 2000-2003, new contracts were signed with some countries in the Middle East, Africa and Southeast Asia. A total of about 45 fighter aircraft were exported. In addition, RSK "MiG" was able to conclude contracts for the supply of modifications of the MiG-29SMT or modernization of previously delivered fighters to this version.

So in 2001, Eritrea received the 2 MiG-29 fighter, which in the future was upgraded to the MiG-29CMT version (9-18). In 2003 – 2004, 12 MiG-29 fighters were delivered to Sudan, which paid approximately 140 – 150 million dollars for aircraft. Myanmar acquired the same batch of MiG-29 light fighters in 2001, deliveries were made in 2001 – 2002. In addition, a fairly large procurement program with a subsequent upgrade of a total of 20 fighters was implemented in the interests of Yemen. Initially, 2001 fighters MiG-12 and 29 MiG-2UB in the amount of 29 million were purchased in 420. After that, in 2004, the parties signed an additional contract, according to which Yemen will receive more 6 new MiG-29CMT fighters, and also upgraded the previously delivered 14 fighters to the same version.

Thus, by the middle of the 2000s, the Russian fighter manufacturer was able to get out of the crisis situation of 90. At this time, there was a significant strengthening of its corporate structure, improved the financial situation of the entire enterprise, the prerequisites for restoring full-cycle production and new fighter modification options appeared. 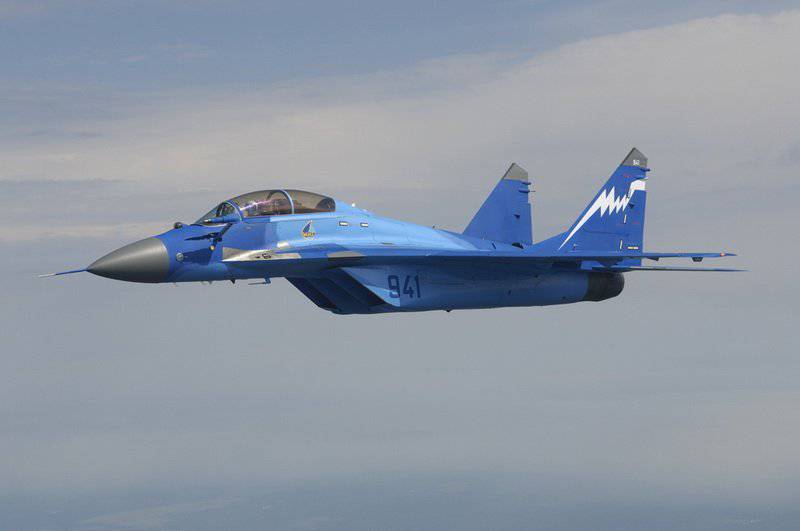 MiG-29K
The heyday of the export prospects of the Russian fighter fell on the 2004-2007 year, but by chance many promising deals were never completed. 24 January 2004 was contracted to reorganize the aircraft carrier Vikramaditya for India, at the same time a contract was signed for the creation and supply of the Indian Navy 16 MiG-29K / KUB fighters for a total of about $ 750 million. Also at this time, negotiations were underway to supply Venezuela's Air Force 50 order MiG-29SMT fighters. And at the beginning of 2006, the notorious contract with Algeria in the amount of 1,3 billion was signed. The contract provided for the supply of 28 fighters MiG-29CMT and 6 MiG-29UBT. Also in April, 2007, Syria, expressed a desire to purchase 12 MiG-29М / М2 fighters and another 4 interceptor MiG-31Е, the total amount of the deal could be 1,5 billion euros, being only a starting order.

If all of these projects could be implemented, the delivery of new modifications of the MiG-29 in terms of funds would be comparable to the supply of Su-30 fighters. But this was not to be. Venezuela decided to purchase SU-30MK2. The Algerian deal due to the competition of the local military-political elite was broken and ended with the return of already delivered aircraft to 15 and the refusal to continue the deal, and civil war broke out in Syria, which suspended the contract for an indefinite period and suspended it in the air.

Of course, it can be noted that the Algerian crisis had some negative consequences for the image of a Russian company, but from a financial point of view it cannot be called a failure. RSK MiG retained the Algerian advance in the amount of 250 million dollars, and in addition received a contract from the Russian Air Force to buy all the fighters destined for Algeria. According to the most conservative estimates, the value of this contract is 15 – 20 billion rubles. 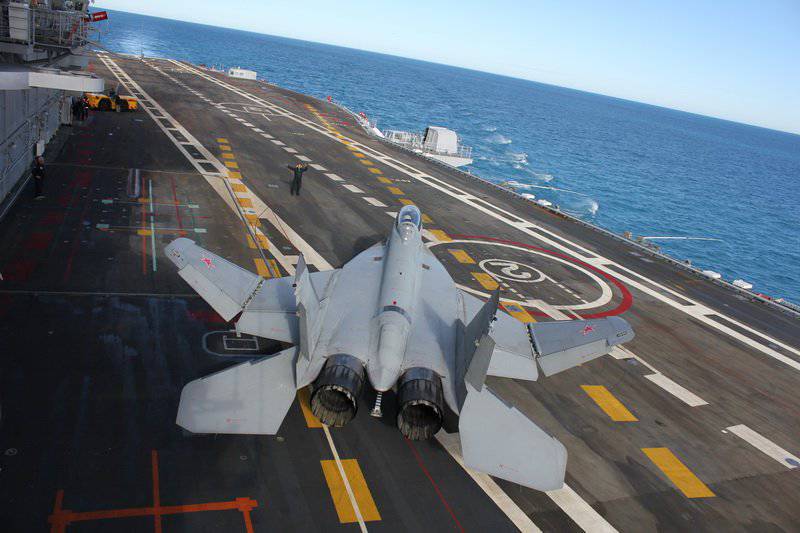 MiG-29CUB
In December 2009, a very important contract for the sum of 410 million euros was signed, according to this contract Myanmar was to receive 20 light fighters MiG-29Б / СЭ / УБ. The following year, the Indian Navy option was transferred to a firm contract for the purchase of another 29 MiG-29K / KUB fighter aircraft with a total value of 1,5 billion. Finally, in 2012, the Russian Navy ordered 24 of the same ship-based MiG-29K / KUB fighter for the 279-th separate ship-based fighter aviation regiment.

Prospects for further sales of the MiG-29 fighter both for the needs of the Russian Air Force and for export are determined by the following set of factors:

- comparative (in comparison with the “extreme” heavy platforms) simplicity of this fighter and the economics of its operation;

- the presence of a fairly extensive fleet of data of previous versions of fighters in 28 countries of the world, with trained personnel and already deployed the appropriate ground infrastructure. Some of these countries appear to be natural candidates for the purchase of new batches of modern modifications based on the MiG-29;

- low political sensitivity of deliveries of such fighters with a moderate radius of action and a comparatively low combat load in comparison with heavy fighters with an take-off weight of more than 30 tons;

- the presence of a unique proposal to date - the deck version of the MiG-29K fighter, the only mass-produced horizontal take-off fighter that can take off from aircraft carrier ships without the use of a catapult;

- the still remaining possibility of Russia to control (due to the deliveries of engines) the export of Chinese J-F-10 and FC-1 / JH-17 Chinese light and medium fighters, which are quite similar in technical and financial characteristics. 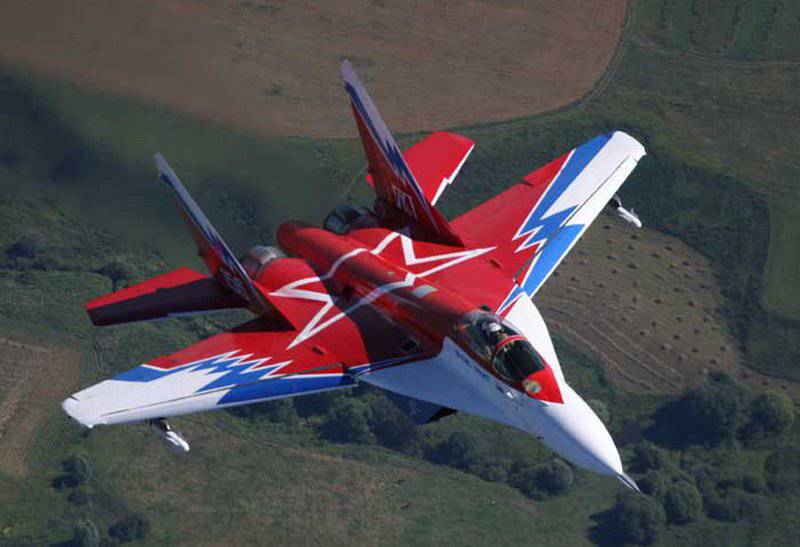 MiG-29M
One of the largest and most promising markets is still India. And although RAC "MiG" lost in the MMRCA tender for the supply of 126 medium multifunctional combat aircraft, the MiG-29 still has good chances in the Indian market. Negotiations and delivery of Dassault Rafale fighters, which won the tender, will take quite a long time, while in order to maintain the size of the fleet of Indian fighter air forces will require intermediate purchases of fighters. Such a fighter may well be the MiG-29UPG (9-20). In addition, as the program to build its own carrier ships develops, the Indian Navy will need to increase its fleet of partially delivered and contracted 45 MiG-29K / KUB fighters. Most likely Delhi buy more 20-24 data machines.

In addition, in recent years there has been an increase in demand from the oil-producing states of the CIS - Kazakhstan, Azerbaijan, and to a lesser extent Turkmenistan. All these states can be considered as potential buyers of the MiG-29М / М2. Given that the most promising "anti-Western" markets are under blockade (we are talking about Iran and Syria), supplies to the CIS are seen as quite promising. An unequivocal interest in the purchase of the MiG-29М / М2 has already been expressed by Kazakhstan. The choice in favor of these fighters is logical for the Air Force of relatively poor countries, which are already operating these fighters of previous modifications. These countries today include Sudan, Peru, Bangladesh, Cuba and Myanmar, and Serbia in Europe.

Ctrl Enter
Noticed oshЫbku Highlight text and press. Ctrl + Enter
We are
An-12 in AfghanistanMiG-23 fighters in Afghanistan
68 comments
Information
Dear reader, to leave comments on the publication, you must to register.