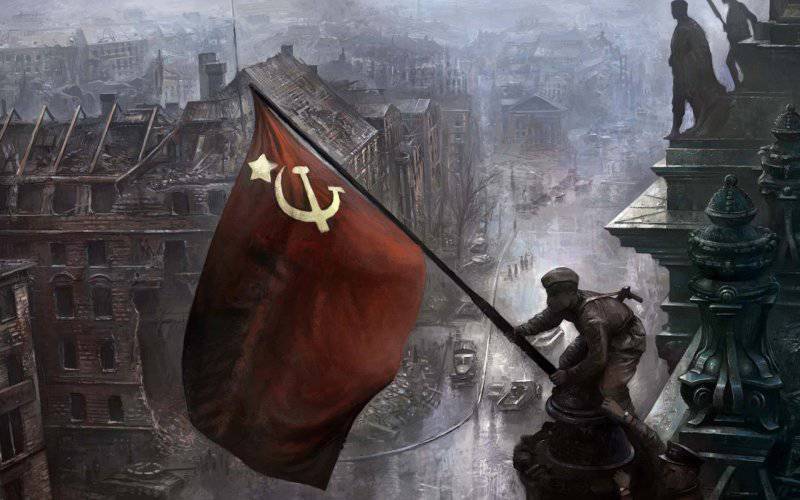 The Great Patriotic War showed the world amazing examples of courage and resilience, heroism of the multinational people of the Soviet Union. Remind about the cohesion of various nationalities of the Soviet Union and the heroism of their representatives in defending the Fatherland in the most difficult years for him, and thus sharpen the desire to peer more closely at our history living today, the feeling of their gratitude to the soldiers of that time is the purpose of the story of heroism, which did not know national boundaries.

The course and results of the Great Patriotic War, unprecedented in scale, severity and uncompromising showed that the strength of the people who won Victory over fascism, in its unity, spiritual cohesion, regardless of nationality, faith and national traditions, in the justice of the goals for which the people lead armed struggle. The state of society at that time is accurately depicted in the song “Holy War”, which even today cannot be listened to indifferently. The call for a "mortal battle" with the "dark fascist force" was heard by millions of Soviet people. That is why everyone rose up to fight the fascist invasion: old and young, men and women, all nations and nationalities of the Soviet Union, which turned Soviet society into a strong military organism and became one of the decisive sources of Victory in that war.

Starting a war against the Soviet Union, the fascist German leadership was counting on the aggravation of interethnic contradictions within our country, that the multinational Soviet state is, say, an "ear on clay feet," which at the first strike of the Wehrmacht would disintegrate and cease to exist. However, this did not happen: the calculations of the Nazis did not materialize - the friendship of the peoples with honor stood the test of the war and became even more tempered.

From the very first days of the war, the unparalleled heroism of soldiers and commanders of various nations and nationalities of the Soviet Union seriously disrupted the plans of the German offensive, slowed down the advance of the enemy troops, and then ensured a breakthrough during the war and its victorious conclusion. The defense of the Brest Fortress, the Caucasus, Leningrad, the Moscow, Stalingrad, Kursk battles and other glorious pages of the history of the Great Patriotic War, which were written with unparalleled feats of the Soviet soldier. Close the body of the embrasure of the enemy pillbox, rush with grenades under the tank, go to the ram in an air battle - only real sons and daughters of their people, heroes could.

Significant contributions to the defeat of the fascist army were made by national formations and units, the formation of which began as early as August 1941, and which were staffed by the human and material resources of the RSFSR, Ukraine, Belarus, Uzbekistan, Kazakhstan, Georgia, Azerbaijan, Lithuania, Latvia, Estonia, Moldova, Kyrgyzstan, Tajikistan, Armenia, Turkmenistan. The real possibilities of each of the union republics were different, but each of them laid everything on the altar of the Victory that it could. The first was the 201-I Latvian Rifle Division, formed on 90% consisting of residents of the Latvian SSR and more than half consisting of Latvians. During the war years, national units were formed in the 11 union republics. In total, 66 national military units — 26 rifle and mountain rifle divisions, 22 cavalry divisions, and 18 rifle brigades — were formed in the Red Army. Of this number, 37 national military units participated in the fighting on the fronts of the Great Patriotic War.

34 million 476 thousands of people who were called up during the war in the Red Army, represented 151 nation and nation. And all of them - privates and commanders, infantrymen and tankmen, pilots and sailors, artillerymen and cavalrymen, telecommunications operators and doctors - sons and daughters of all the peoples of the Soviet Union were united in one thing: to defend the independence of the Motherland, to destroy the hated fascism. In this context, the story captured an interesting fact - the military exploit of the Armenian village of Chardakhlu, from which 1250 people (the entire male population) went to the front. Of these, 853 was awarded orders and medals, 452 fell to the death of the brave on the battlefield. This village gave the Motherland two Marshals (Baghramian, Babajanyan), four Heroes of the Soviet Union, many officers of senior commanders. It is difficult to find a similar village anywhere, like 16, the centuries-old Artsakh village of Chardakhlu.

The mass heroism of the Soviet people in the Great Patriotic War consisted of amazing individual models of heroism of representatives of various nationalities in battles on land and in the air, on water and under water, on fronts and in partisan detachments, the underground in the territories temporarily occupied by the enemy, in the rear at factories and collective farm fields. Let us recall at least some bright heroic feats accomplished by Soviet soldiers of various nationalities.

For courage and heroism shown during the crossing of the Dnieper, he was awarded the title Hero of the Soviet Union: Uzbek, private Alinazarov Sodyk; a Kazakh, an assistant to the gunner of the anti-tank gun of the 7 Guards Cavalry Corps, the Private Guard Kaldykarayev Zhumagali; Tatarin, reconnaissance 325 of the separate reconnaissance 246 of the rifle division Sergeant Kaliev Anwar; Ossetians, shooters of the 5 Company 182 Rifle Regiment 62 Rifle Division, Private Guard Mashkov Igor Anatolyevich; the Bashkirs, the commander of the guns of the 75 artillery regiment, junior sergeant Murgazalimov Gaziz Gabidullovich; Mordvin, radio operator of the communications company of the 43 Infantry Regiment of the 106 Infantry Division, Senior Sergeant Shchukin Andrei Fedorovich; Jew, squad leader of the 163 Infantry Division, Sergeant Khokhlov Moses Zalmanovich.

At the most tense moment of the battle for Chernushki’s village, when the fire of the enemy machine gun pressed the company of the attacking Red Army men to the ground, the Russian private soldier Alexander Matrosov covered the embrasure of the enemy bunker with his chest. Having sacrificed himself, Matrosov ensured the success of the offensive and saved dozens of lives of his comrades. So the pupil of the Ivanovo orphanage, a nineteen-year-old Komsomol member, Alexander Matrosov, approved his immortality. The brave soldier was awarded the title Hero of the Soviet Union, and his name was forever listed in the 1 Company of the Guards Regiment, which began to bear the name of Alexander Matrosov. During the war, the feat of Alexander Matrosov was repeated by 300 people.

Abkhaz, Senior Sergeant Gablia Varlam Alekseevich, commander of the mortar calculation of the 144 Battalion of the Marine Corps of the 83th Marine Infantry Brigade of the 46 Army. He went through the whole war, liberated the cities of Europe, was 6 once injured, but each time after the hospital he returned to the line. In March, 1945, near the city of Esztergom (Hungary), fought for four days as part of a battalion in isolation from the main brigade forces, destroying a large number of enemy personnel. He was wounded, but he did not leave the battlefield.

Russian, senior sergeant Chirkov Fedor Tikhonovich, gunner of the 295-th separate anti-tank division 126-rifle Gorlovskaya division of the 43-th army. Particularly distinguished in the assault on Koenigsberg. During the assault of the fort №5, under strong mortar and rifle-and-machine-gun fire of the enemy from the distance 100 meters fired at the embrasure’s embrasure, then crawled to it and threw grenades at the embrasure, which contributed to the capture of the fort, which garrisoned 200 soldiers and officers.

Chechen, senior sergeant Khanpasha Nuradilovich Nuradilov, commander of the machine-gun platoon of the 5 Cavalry Division. Personally destroyed about a thousand fascists. He died in battle.

Russian, senior sergeant Popov Vasily Lazarevich. Distinguished himself in the storming of the city - the fortress of Koenigsberg. The commander of the shooting department assault group, Komsomol Company. In street battles over Königsberg, Senior Sergeant Popov, with a detachment, led the assault units of the Soviet fighters ahead. Personally destroyed 34 German soldiers, captured about 80, captured 2 guns. He died in battle.

Ukrainian, Borovchenko Maria Sergeevna, senior sergeant of the 32 Guards Artillery Regiment of the 13 Guards Rifle Division of the 5 Guards Army. She died in battle, covering the officer with her body.

Bashkir, senior sergeant Sutulov Grigory Alekseevich, commander of the walking intelligence unit. At the head of the reconnaissance group, he was one of the first to cross the Oder River (within the city of Opole, Poland). In the battlefield on the bridgehead, he provided command of the necessary intelligence information about the enemy, thereby contributing to the successful offensive of the troops.

And many, many other Soviet soldiers, whose courage and heroism did not know national borders. And the further the war years go down in history, the brighter we face their great feat, thanks to which the Soviet people won in the Great Patriotic War. We, contemporaries, should be grateful to the heroes for their freedom, remember the lessons of the past, the price of this freedom.

The war showed that our multinational people at the time of mortal danger can mobilize all their forces to defend their homeland. All gave their strength to fight the enemy: those who fought at the front, and those who worked in the rear. Only thanks to the feats of millions of people the current generation has the right to a free life.

Living now! Take a closer look at our history at the examples of the Heroes of the Great Patriotic War and pass on to the coming generation a sense of gratitude, involvement in the aspirations and dreams of the warriors of that time - they fought, died, defended the Fatherland for us who live now. It is important that the moral experience of the war years becomes an integral part of the spiritual world of present and future generations.

... Heroes in Russia have been at all times. There are they today. And this is the surest pledge of the invincibility of our Fatherland, its spiritual strength and the coming revival. As long as the Russian soldier is alive - a loyal son and defender of his homeland - Russia will be alive too - the Russian soldier remains a true patriot and worthy heir to the Russian army.