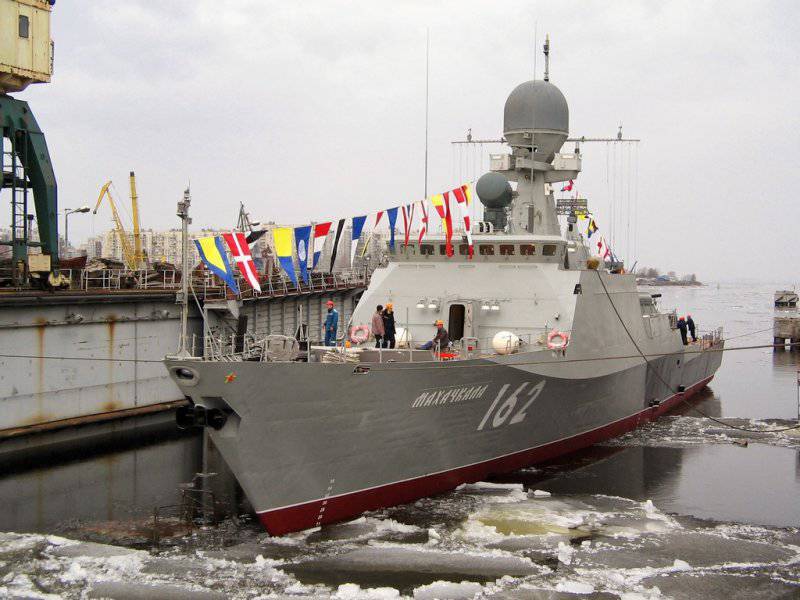 RIA News. JSC Shipbuilding Firm Almaz has transferred a small artillery ship of the 21630 project Makhachkala to the Russian Navy, the company reports.

"In October 2012, the ship successfully passed all factory running and state tests. The ship is designed to protect and protect the state's 200-mile economic zone," the report said.
Makhachkala is the fifth ship in 2012 that Almaz handed over to customers. In June, the border guard ship of the 22460 Diamond project and two border boats of the 12200 Sobol project were transferred, in September the customer received another guard ship of the 22460 project Pearls. "

“Makhachkala” has low draft and high maneuverability, the ship is capable of solving a wide range of tasks in the coastal zone of the Caspian Sea, on the river and in the estuary, as well as in other “narrow” water areas. The ship was built using technologies that make it inconspicuous for enemy radar surveillance equipment. Makhachkala is the third ship of the Buyan project. The first ship of this type "Astrakhan" became part of the Caspian flotilla in 2006, the second - in July of this year.

The ship will spend the winter in Baltiysk, and in the spring of the year 2013, after opening the inland waterways, will leave the ice for its permanent base in Astrakhan. The new IAC will be part of the Caspian flotilla and will join the same type "Astrakhan" and "Volgodonsk."

"Almaz" specializes in the construction of high-speed patrol boats, yachts and working vessels with hulls of aluminum-magnesium alloys and steel. In addition, the shipyard is the world leader in the construction of amphibious hovercraft. The company supplied the Navy with several dozen amphibious assault ships: 1205 Skat, 1206 Kalmar, 1232-1 Jayran, currently the plant is building a mass-produced 12322 Bison airborne ships. This ship is the world's largest hovercraft amphibious assault ship. 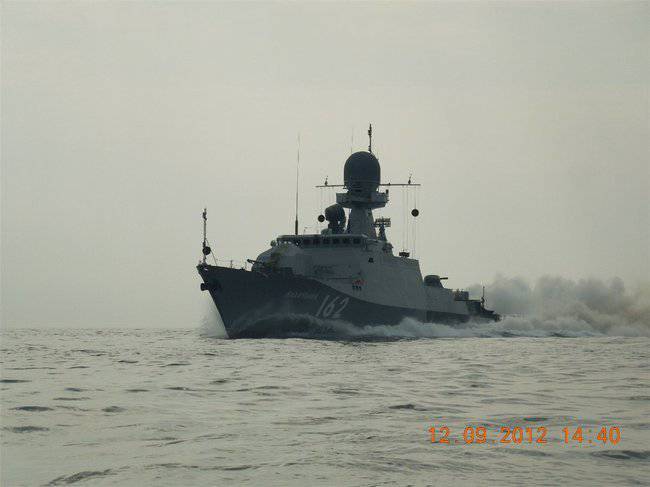 According to the original plans, the ship was to be launched in the 2008 year and, after factory and acceptance tests, were handed over to the Navy.
However, the receipt of a large number of orders from the FSB of Russia for the construction of patrol boats 12200 Sobol and ships 10410 Svetlyak, 22120 Purga and 22460 Okhotnik for the Coast Department border guards forced to adjust plans. In addition to orders from Russian border guards, the plant simultaneously built 2's Sobol for Turkmenistan and 3's Svetlyakov (1 for Slovenia and 2 for Vietnam) under Rosoboronexport contracts.

After putting most of the ships and boats listed above to the customer, the plant resumed the construction of the MAC, and the ship was launched on 27 on April 2012. After installing the artillery A190-01 in early September, the ship moved to Baltiysk and began state tests, which were successfully completed in November.
Ctrl Enter
Noticed oshЫbku Highlight text and press. Ctrl + Enter
We are
Another Sobol transferred to the Coast Guard of the Federal Security Service of RussiaLaunched "Pearl"
Military Reviewin Yandex News
Military Reviewin Google News
18 comments
Information
Dear reader, to leave comments on the publication, you must sign in.