December 5 2012
10
SA.342 Gazelle is a multipurpose light attack helicopter that was created by the French company Aerospatiale (currently called Eurocopter France). The helicopter was created on the basis of the SA.341 Gazelle multipurpose helicopter and differed from its predecessor, the new GTD Astazou XIV and 2 with its suspension nodes for installing various weapons. The first flight of the helicopter prototype took place in the 1973 year, the car was put into service in the 1977 year. The helicopter was exported to a large number of countries. In Yugoslavia, its mass production was set up at the SOKO plant, in total more than 200 helicopters of various modifications were assembled, which to this day are in service with the Air Force now in Serbia. In service is about 60 data helicopters of various modifications.

In 1972 — 73, Yugoslavia acquired the first batch of 21 helicopters SA.341H Gazelle helicopter in France, and later SA.341H Partizan helicopters were manufactured under license from SOKO at the plant in Mostar (the 132 helicopter was built in total). From 1982, this plant switched to the production of SA.342L helicopters (100 helicopters were also made). SA.342L light attack helicopters were produced in 2-s major modifications. So the helicopter of fire support, which was called SA.342L GAMA, was intended to fight the enemy’s armored vehicles and was armed with four Soviet-made Malyutka-2 ATGM.

The choice of this anti-tank armament was explained by the fact that these complexes were in service with the ground forces of the JNA (Yugoslav People's Army), while helicopters could always replenish their ammunition with army units. The second most common option was the helicopter SA.341L HERA "Gazelle-HERA" (Helicopter-Radio), which was intended to carry out reconnaissance and adjustment of artillery fire. Usually, the JNA Air Force helicopter squadrons were armed with helicopters of all 3 modifications: according to the Partizan 4 (old SA.341Н) and the New Khera and Gama 4. 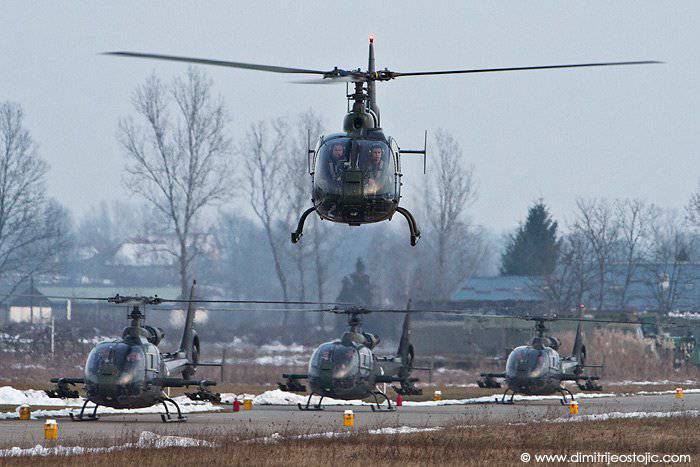 At present, the Serbian Air Force has a helicopter squadron called Senke (Shadows), which flies on one of the most beautiful helicopters in the world, the Gazelle. Since its formation in the 1984 year, the 714-I anti-tank squadron, dubbed “Shadows”, has been responding to the battlefield for the destruction of enemy armored vehicles and the provision of direct fire support to ground units. Currently, the squadron is armed with the SA-341H and SA-342L helicopters, most of them in the shock version, which is known by the Serbian terminology as “Gama”.

History creation and description of the construction of "Gazelle"

An experimental copy of the SA.341 Gazelle helicopter, which was equipped in accordance with the requirements imposed on it by the British army, was assembled in France and then sent to England by Westland. This car first flew 28 on April 1970 of the year. 14 May 1970, the first prototype SA 341 was manufactured. This helicopter was able to set the 3 speed record for helicopters in its class. This fact caused a fairly large commercial interest for the new helicopter, which was embodied in numerous foreign orders. The French version of this helicopter was designated SA 341.1001 (made the first flight of the 6.08.1971), the helicopter had an increased tail section, an extended cabin, a more powerful engine. The armament of the French army was adopted under the symbol SA.341F Gazelle.

The helicopter was designed to conduct surveillance and reconnaissance, communications, evacuation of the wounded, transportation of personnel, transportation of small cargo, as well as providing fire support to ground forces. The helicopter was developed jointly by the French company Aerospatiale and the British Westland on the basis of a joint agreement that was concluded in 1967 by the governments of these two countries. 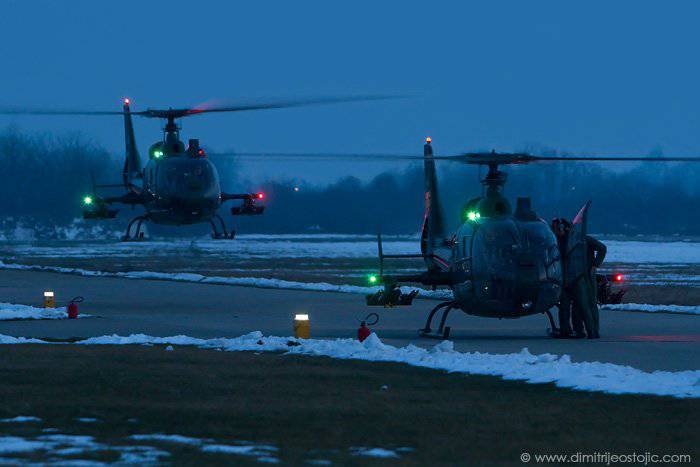 The design feature of the machine was a rigid three-bladed main rotor, which was designed jointly with the German company Boelkow, as well as a multi-blade tail rotor, which was mounted in a tunnel channel in a special vertical tail, called (fenestron). The helicopter was distinguished by a streamlined fuselage of a semi-monocoque hull and had a large glass area of ​​the cockpit located in its front part. In addition to the crew cabin, which consisted of 1-2 pilots, the 3-4 passenger could be freely accommodated or a small cargo weighing up to 270 kilograms.

The helicopter was designed and manufactured according to a single-rotor scheme with a fenestron-type steering screw; the car was equipped with one gas turbine engine (GTE) and a ski landing gear. If necessary, wheels or inflatable cylinders could be installed on the ski chassis. The fuselage of the helicopter was all-metal. On the tail boom of the machine, made of aluminum alloy, vertical tail with a steering screw and a stabilizer were mounted. In the cockpit of the helicopter there were seats: in front - for the crew members, in the back - a common seat for 3-passengers. For convenient access to the cabin from each side, doors were opened that opened to the outside. Immediately behind them was an additional cargo door that opened inward. In the cabin floor there were special attachment points for fixing the transported goods.

Access to the luggage compartment of the helicopter was carried out through the auxiliary door on the right side of the fuselage or through the rear bulkhead. The helicopter cabin was equipped with a ventilation system, it was also possible (if necessary) to install cabin heating systems. At the same time, the design of the helicopter's airframe is designed for use in a fairly wide range of ambient air temperatures from -35 to + 50 ° С. In the military version of the helicopter, the crew cabin is booked. 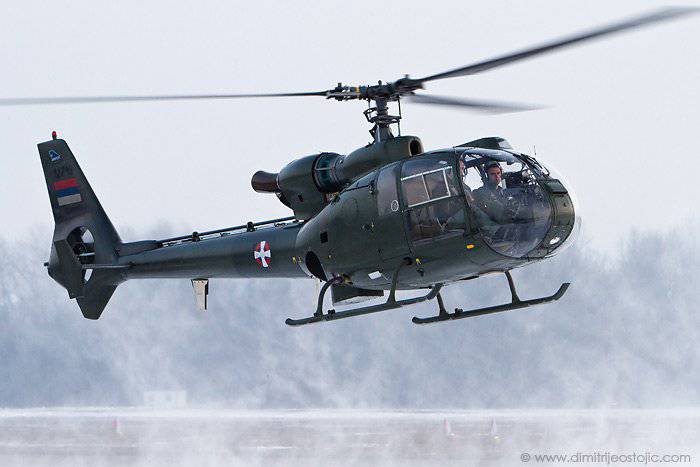 The vertical tail assembly of the helicopter has an asymmetrical profile; it is set at an angle to the longitudinal axis of the tail boom; during flight, it creates lateral force to balance the resulting reactive torque. The stabilizer has a rectangular shape with an inverted profile; its span is 1,93 meters. The chassis is ski and fastened to the fuselage of the car with the help of curved steel pipes, while the racks of skis have fairings. The chassis gauge is 2 meters.

The rotor of the helicopter is three-bladed, the blades have a rectangular shape and are made of composite materials. The diameter of the tail rotor is 0,695 meter, it is installed in a special annular channel and has 13 blades, which are stamped from a light metal alloy.

The engine is located at the top of the fuselage behind the cockpit, the engine is covered with a fairing. At the nozzle of the engine is a deflector, which reduces the thermal radiation of the machine, which reduces the visibility of the helicopter in the IR range. The dry weight of the engine is 160 kilograms. The helicopter fuel system consists of 2-x fuel tanks with a total capacity of 545 liters (one of the tanks is under the luggage compartment). Also, if necessary, the installation of an additional tank with a volume of 200 liters, located in the rear part of the cabin, is provided during the distillation of the helicopter. The oil reserve is 14,6 liters for the engine and 3,5 liters for the gearbox. 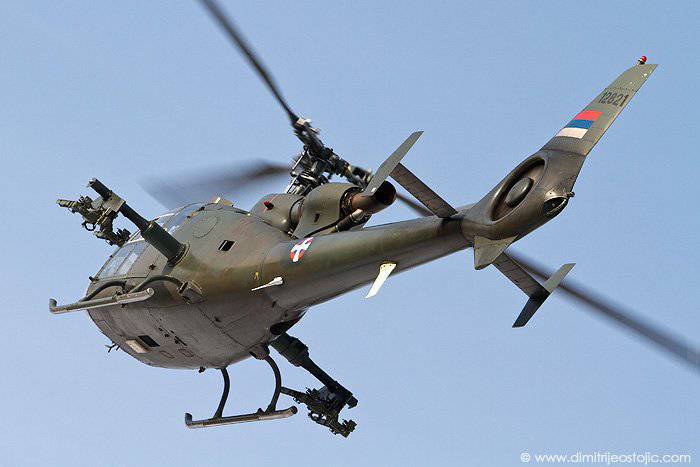 The helicopter's transmission includes the main gearbox (main rotor and engine gearbox) located in front of the engine above the back of the cockpit, the intermediate gearbox that is above the engine and the tail rotor gearbox. The hydraulic system consists of three power steering rotors and one power steering mechanical screw. In the event that, for some reason, the hydraulic boosters fail, a transition to a conventional mechanical control system is possible.

The electronic equipment of the helicopter consists of transceivers of the shortwave, decimeter and meter ranges, signal receiver, intercom. Additional navigation equipment includes a radio altimeter, radio compass, omnidirectional VHF beacon. If necessary, can be mounted autopilot and equipment for instrument flight. The Gama anti-tank variant can be additionally equipped with an autonomous navigation system, an autopilot, equipment for making night flights and a Doppler radio beacon.