December 5 2012
32
While in Syria itself, fighting continues between the armed forces and the rebel formations, very interesting things are happening near the borders of this country. A few days ago, a commission composed of experts from NATO countries arrived at the Turkish-Syrian border. The purpose of the commission’s work, according to official data, is to select sites for the deployment of anti-aircraft missile systems MIM-104 Patriot. At first glance, nothing special: Turkey enters NATO and therefore can count on military-technical assistance from foreign allies. However, reports of the departure of the commission and its goals immediately became the object of close attention. First, it is planned to deploy the “Patriots” on the border with Syria, where the civil war has been going on for the second year. Secondly, Turkey supports the Syrian rebel detachments and is at enmity with official Damascus. Even these two facts are quite capable of directing certain thoughts. 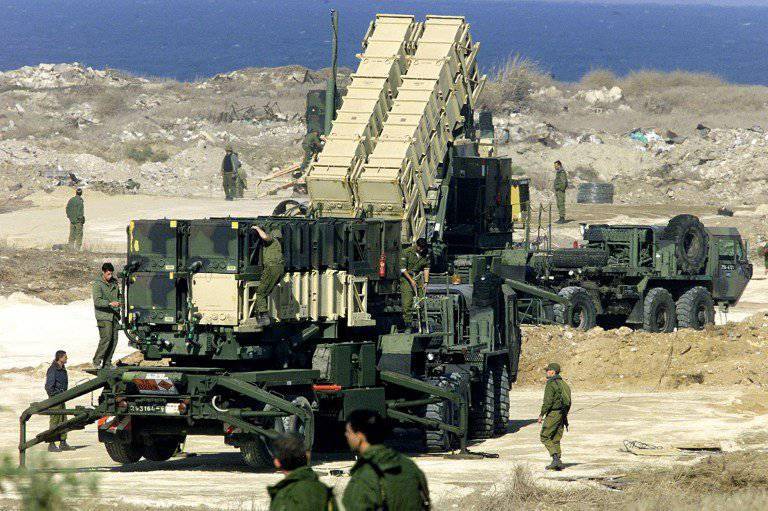 Obviously, Ankara understands possible logical constructions and therefore Turkish officials immediately explained the reasons for preparing to deploy anti-aircraft complexes. Official statements of Turkey are as follows: the Syrian civil war entered a stage in which it was impossible to predict further events. Therefore, not wanting to be embroiled in an armed conflict, Turkey intends to "fence off" from a possible attack. In addition, the MIM-104 SAM system will be able to protect the Turkish population from a hypothetical Syrian chemical weapons. In general, the administration of President A. Gul and Prime Minister R.Т. Erdogan calls the "Patriots" a purely defensive weapon. Such statements seem plausible enough. But there is reason for doubt.

The official version of Ankara raises claims, primarily in the light of the position regarding the Syrian war. Turkey supports the rebels, and the Syrian army has several times declared direct assistance to insurgents, including weapons, to which it provided evidence. From this it follows that anti-aircraft complexes at the border can be used not only for their defense, but also for other military purposes. Such a goal, for example, could be to provide a no-fly zone, as was the case last year in Libya. The MIM-104 complex is capable of firing aerodynamic targets at distances up to 80 kilometers, which allows you to "close" a large strip of Syrian territory near the border. At the same time, Patriot’s anti-missile capabilities provide for interception of targets at much shorter ranges, which may serve as yet another proof of Turkey’s unkind intentions.

Meanwhile, Turkey’s NATO allies are already expressing their willingness to help with the organization of air defense and missile defense. Germany has already indicated the possibility of temporarily transferring two batteries (up to eight launchers in each), and the Netherlands may allocate one battery. The rest of the NATO countries so far are only considering the need for assistance to the ally. Probably they are being stopped by unclear prospects. If Turkey nevertheless decides to enter the war and use the rented anti-aircraft systems for its own purposes, then countries that share equipment may be in an ambiguous position. In this case, the status of the transferred anti-aircraft systems will raise serious questions. If Turkey will keep the received "Patriots" only on duty in order to ensure its own security, such a transfer will remain an internal affair of the NATO bloc. If the Turks are going to make a no-fly zone, then this, like any other sanction against an independent country, will require special permission from the UN Security Council. Accordingly, Ankara’s attempts to “close” the Syrian sky for state flights aviation without a resolution, the Security Council will to some extent hit the reputation of the countries that transferred their complexes. It is unlikely that any of the leaders of the leading NATO countries wants Turkey to realize its geopolitical ambitions at their expense.

True, the Turks can really use the rented "Patriots" for protection. Only they will not protect civilian facilities and infrastructure, but militant caravans. As is known, most of the destroyed caravans, marching across the Turkish-Syrian border, were discovered and attacked by aviation. In addition, the current civil war has a characteristic feature: armed rebels shortly after crossing the border can disperse in any locality and "disappear." So the task of disrupting and stopping the supply of rebels from abroad, in the first place, lies with the aviation of the Syrian armed forces. Thus, MIM-104 from Turkish territory can cover militant caravans, protecting them from attacks by Syrian government aviation.

Yet the most likely scenario is that Ankara’s attempt to enter the war on the side of the insurgents and, relying on the help of NATO allies, gain control over Syria through a puppet government brought to power. However, in this case, Turkey will have to look for new reasons for entering into conflict. For example, the method used by NATO during the war in Libya with the creation of a no-fly zone and the subsequent destruction of almost the entire military infrastructure will no longer work. According to NATO representatives, in Libya their troops acted exclusively in accordance with the decision of the UN Security Council. Now, obtaining such a permit will be a very, very difficult process. A number of countries with the right of veto are fully capable of using it and blocking attempts to impose any sanctions against Syria aimed at supporting rebel formations.

It is noteworthy that the possible transfer of anti-aircraft complexes causes claims in Turkey itself. For example, the expert of Bilkent University, Klorai Gurbuz, in his recent interview with Golos Rossii, noted the absence of any benefits in renting a Patriot. Since, most likely, the management of the complexes will be carried out by Americans, British or Israelis, the likelihood of benefits for Turkey itself is significantly reduced. In addition, the placement of air defense missile systems on Turkish territory can lead to complications in relations with neighboring countries. By the words of Gurbuz, it is worth adding the possibility of diplomatic problems with countries that have good relations with Syria. In general, for Turkey, the deployment of anti-aircraft complexes can have both beneficial and harmful consequences, and no one can yet predict how things will go in one way or another.

As you can see, the Turkish leadership risks falling into a difficult situation. He will have to choose between geopolitical ambitions and the foreign policy image of his country. In addition, the NATO countries are still only expressing their views on the civil war in Syria and are not going to start a peacekeeping operation yet. All these NATO actions are very similar to an attempt to predict the possible development of the situation and not to get into another adventure. This is probably why so far only two countries have agreed to transfer their anti-aircraft complexes to Turkey.