"Izhmash" increases arms sales in the US

December 4 2012
106
The largest buyer of Izhevsk weapons Abroad today are the United States. According to the information in the official press release of the company and was conveyed to the media during the press conference of Alexander Kosov, over the 9 months of 2012, the export of civilian small arms by Izhmash increased by 60% compared to 2011, and amounted to 483,7 million rubles. Over the 9 months of 2012 of the year, the Izhevsk enterprise supplied for the export of weapons in the amount of 12 times the figures of the same period of the 2010 of the year.

It is significant that one of the largest foreign buyers of the Izhevsk arms factory is the United States - a country that spends the development of modern weapons most in the world. According to Alexander Kosov, interim director general of Izhmash, recently Izhmash has significantly strengthened its position in the market, largely due to the fact that the company has come under the management of the state corporation Russian Technologies. In the course of the reorganization, the enterprise’s asset structure became extremely transparent, many offshore companies and gaskets were liquidated, in which profits settled, the process of modernization of production facilities began, work is underway to improve working conditions and product quality.

Currently, 83% of all exported weapons are from the United States. At the same time, for the 9 months of 2012, the company managed to increase exports to Italy - by 84%, to Germany - by 77%, to the USA - by 62% compared to the same period of 2011. In addition to these countries, the largest exporters of Izhevsk products are Ukraine, Kazakhstan and Pakistan. According to forecasts, the volume of exports of civilian weapons on the basis of 2012 of the year may amount to 665 million rubles. 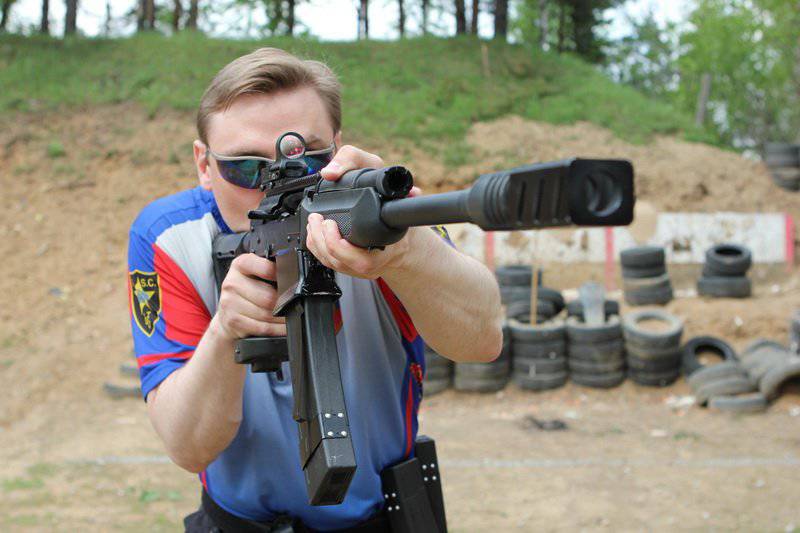 Saiga-12 performed for practical shooting
At the same time, the growth of export of products is not to the detriment of the domestic Russian market. For 9 months, 2012 was sold in Russia by 32,7% more than during the same period last year. The total production at the enterprise in the 9 months of 2012 amounted to 2,7 billion rubles compared to 1,6 billion rubles in 2010 year. At the same time, the temporary director general of Izhmash refused to talk about the ratio in the export of military and civilian products. If we talk about the state defense order, then most of the contracts are executed. At the same time, the enterprise does not count much on orders from the Ministry of Defense of the Russian Federation, since the stocks of Kalashnikov assault rifles in military warehouses are enormous. According to Gazeta.Ru sources, in 2012, the military ordered only 10 000 machines in Izhevsk.

Currently, abroad, including in the USA, smooth-bore and rifled Saiga hunting and police rifles are in increasing demand. In the West, they are quite steady in demand. Izhevsk weapons attracted American weapons lovers not only because of their historical significance - the famous Kalashnikov assault rifle was used as the main weapon in a huge number of conflicts around the world - but also because of the very high reliability of the products and the simplicity of its operation.

Former marine Josh Laura, who is currently assembling garage doors and lives in Maryville in Tennessee, says he acquired Saiga because it was released in Russia, next to AK's big brother. According to him, no gun in the world can compare with him in terms of reliability. Terry Sandlin also works as an electrician in Scottsburg, Indiana. He has three “Saigas” in his house - one rifle and 2 smooth-bore carbines. According to him, “Saiga”, in its versatility and quality, is far from its direct competitors in the market.

Despite the fact that the civilian version of Kalashnikov cannot conduct continuous fire - shoot in bursts - without repeated triggers on the trigger (which is a feature of only full-fledged automata) - in almost all other details "Saiga" is similar to Izhevsk military products. "Izhmash" cooperates with the importing company, which is engaged in the modification of weapons, increasing the capacity of stores and adding a pistol grip, for sales in those states where these modifications are allowed. 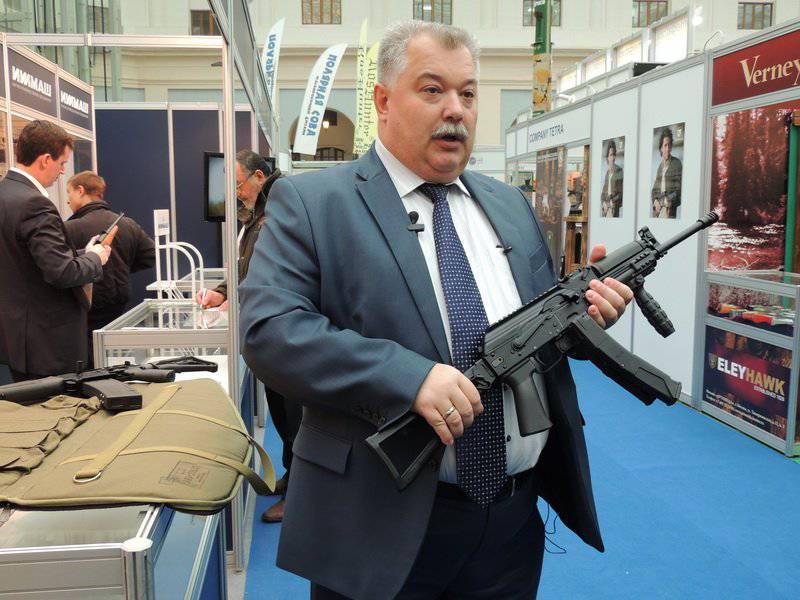 Alexander Kosov at the "Arms & Hunting" exhibition
At the same time, "Izhmash" expects to present novelties based on AK-12 on the civilian market even before the new Kalashnikov passes all state tests. Engaging in the creation of civilian versions in the factory will be in parallel with the development and bringing to mind the AK-12. The temporary general director of Izhmash, Alexander Kosov, has already told reporters that the new Saiga carbines with AK-12 mechanics will be on the market in the summer of 2013, they have no doubt at the factory that they will be able to interest the consumer with their new products.

Around the same summer, the 2013 of the year in Izhevsk is planning to introduce a new Kalashnikov assault rifle for state tests. At the present time, the second prototype AK-12 has passed preliminary tests. From the answer to the question of journalists, whether the new machine will be sold on world markets immediately after entering mass production, Kosov declined. Noting that it is necessary to ask those who are engaged in the sale of weapons - Rosoboronexport.

Alexander Kosov also said that at present the enterprise is working on the development of fundamentally new models of civilian weapons. “Today, at Izhmash, we are thinking of how to implement balanced mechanics on a smooth trunk,” said Kosov. In Izhevsk today, the production of weapons with balanced automatics has been set up - in particular, AK-107, AK-108 and AN-94 assault rifles, known as "Abakan" or Nikonov's submachine gun. The use of balanced automation gives a significant increase in the accuracy of fire, but at the same time automatic machines with such mechanics are not widely used due to the rather complex design. 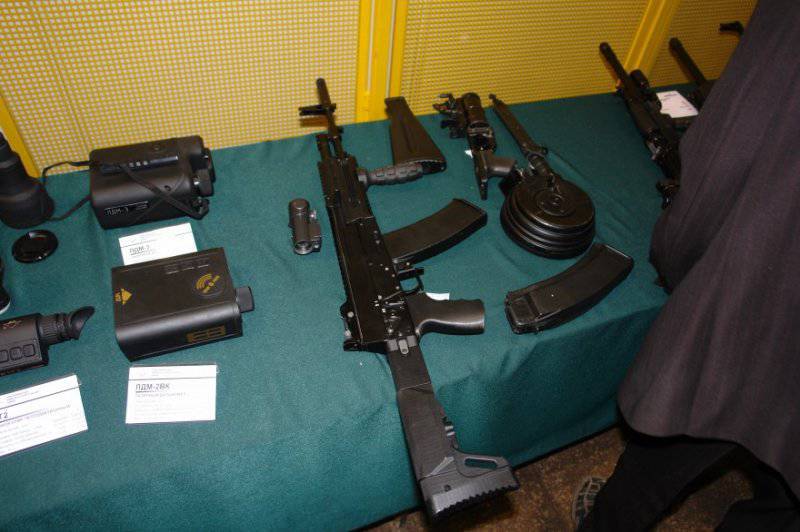 AK-12
High hopes at the plant and impose on a promising machine AK-12. It is known that the Ministry of Defense of Russia refused to purchase old models of AK machine guns, not in 2012 and not in 2011, but for quite some time. The purchases were stopped not because the weapons did not satisfy the increased demands from the military (although this is true), but because a huge number of different AK versions accumulated in the military warehouses. According to official information on the order of 17 million trunks, according to unofficial data, there may be more automata in 3 times. At the same time, the Russian army, even within the framework of a sufficiently large local conflict, will not need more than 500-700 thousands of small arms. Where to put the rest, nobody knows yet. At the same time, it is clear that producing new barrels is simply meaningless. Experts today are laughing, on "Izhmash" is the world's largest conveyor for the production of Kalashnikov assault rifles. If necessary, there will be able to rivet a huge number of machines, but the trouble is that more is no longer necessary. Others are a new weapon - modern and more efficient than the old AK-74 and its derivatives.

Such a weapon is already in the making, and the second AK-12 prototype recently passed a series of tests at TsNIItochmash in the town of Klimovsk near Moscow. In this institute tests of all small arms, which are produced in Russia, are carried out. It is here that the rifled and smooth-bore weapons are given a green light and a start in life. Initially, the media reported that TSNIItochmash made up a fairly large list of shortcomings and flaws in the new Kalash, but this information should not be taken too seriously. All specialists know that tests of new types of equipment, be it a car or an automatic, are in order to identify the maximum number of flaws and then eliminate all the identified flaws and roughness that designers and engineers could miss.

AK-12, tested in Klimovsk, was the second prototype of Izhevsk news. By the summer of 2013, the third prototype will be ready, in which the deficiencies identified at TsNIItochmash will be eliminated. This third version is supposed to be sent to conduct military trials. But even after that, the fourth prototype will be released, which will be handed over to state trials, and only after their successful completion can the new product be sent to the troops. At the same time, the army is ready to buy a new machine only if it is at 30-40% surpasses the world-famous AK-47 and AK-74 models, as well as AK hundredth and two-hundredth series and their modifications, in terms of efficiency and reliability. You also need to clearly understand that the special forces soldier, contract soldier and conscript soldier need different types of automatic small arms.

AK-74 one of the upgrade options
Some of them need a simpler machine gun, but as reliable as the current AK, someone more difficult, but more effective, with greater accuracy. An example of a specialized machine can be called the same "Abakan" with balanced mechanics. It is still produced, but only in small batches. This happens because there are not so many special forces and contract soldiers, especially among motorized infantry, who could successfully manage their personal weapons and treat them as carefully as possible. No wonder they say that the weapon is the second heart of a soldier, it is impossible not to take care of him.

If we talk about those 17 million Kalashnikov assault rifles that managed to accumulate in the warehouses of the Ministry of Defense, then no one is going to sink them in the ocean. Vyuhivat these machines army, as the Kosov himself put it, also will not. Part of this arsenal will be put on the world arms market in order to bring down the wave of Bulgarian, Chinese and other counterfeit goods, while the rest can be modernized. At present, the 4 version of the AK-74 modernization option has already been created at Izhmash, the most complex of which is the factory version. With such an upgrade, it is planned to replace the bolt cover, on which the Pikatini plate is installed, and then a variety of additional equipment is installed on it - optical and night sights, rifle grenade launchers, collimators.

Tests of the new AK-74 with extended factory upgrades are also conducted at TsNIItochmash. In addition, Izhevsk Arms Plant received an order to create a new cartridge for the Kalashnikov assault rifle. An automatic machine with a cartridge is already a whole complex, where one cannot exist without the other. An effective and powerful weapon requires a new, effective and powerful cartridge, which is planned to be developed.