Electromagnetic grenades for the US Army 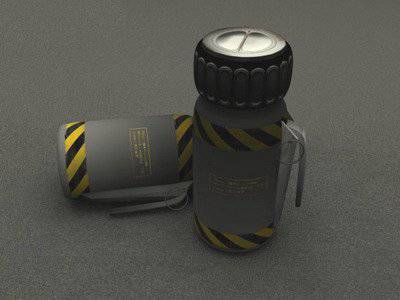 Genre computer games, science fiction books, movies, animated videos have long demonstrated to us the possibility of using so-called electromagnetic grenades. But for a long time this idea of ​​science fiction remained unrealized in practice.

On the way to the realization of the idea of ​​using an electromagnetic pulse, grenades were decided by the American military developers. They wanted to start applying this. weapon against bombs laid by militants in various countries of the world.

One of the purposes of the weapon of the future can be the option of using it in terms of generating a microwave pulse, which will have to ensure the destruction of improvised explosive devices laid in the path of movement of automobile or armored vehicles. A powerful electromagnetic impulse will be able to force the activation of the electronics of the hellish machines, which eliminate themselves. It is obvious that the use of grenades will be effective only if the bomb is not laid in the place of a mass gathering of people. Or you need to pre-produce a series of evacuation work.

The Pentagon has placed a request with a proposal to create electromagnetic hand grenades. Such grenades will be able to enter the arsenal of an American infantryman, who can use them when participating in operations. In addition to the manual option, an option for RPGs, missile warheads and other weapons options is also being considered. Americans are counting on the fact that the grenade will be small in weight and size so that a person can easily throw it at a certain distance.

At the same time, customers of the EM grenade declare that the result of using such a grenade is not always an explosion. Ordinary grenade will be suitable for an explosion with the fragmentation of fragments. The goal is different. Here there should be a surge in the electromagnetic field, which will allow to violate the plans of the militants and terrorists.

One of the problems associated with the implementation of EM grenades is the problem of reducing the size, since the prototypes are still too large to be classified as hand grenades. In addition, such grenades can affect with their impulse the electronics included in the arsenal of a fighter using such weapons: a communication system may be disturbed, for example. Work to solve these problems is already underway.
Military Reviewin Yandex News
Military Reviewin Yandex Zen
18 comments
Ad