Friendship in exchange for helicopters and armored personnel carriers 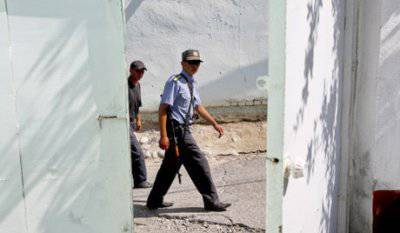 Have you ever heard of such an incredible phenomenon as “humanitarian aid from the Ministry of Internal Affairs of the Russian Federation to anyone's address?” So-and-so ... And it (humanitarian aid), it turns out, happens ... And not only it happens, but it may even concern citizens of foreign countries. And how can our police "humanitarian" to help foreigners? - Asks interested reader. - Really rubber truncheons or police suhpaykom? But away from irony, for it is in about this vein that the material support from the Russian law enforcement agencies of their Kyrgyz colleagues is implied.

It turns out that about 3 years ago, Russia thus already helped the fraternal Kyrgyz militia, but since 2009, the Russian form, as stated by an employee of one of the Bishkek regional departments, has pretty worn out, frayed in the wind and under the influence of the scorching Kirghiz sun. That is why Kyrgyz law enforcement agencies expect that the Russian Ministry of Internal Affairs will not leave them in trouble, as there is nothing to order directly the Kyrgyz police uniform from Bishkek, judging by the statements of the press service.

As the classic said:

Ah, those that you sent
Last week,
We have already eaten a long time
And we wait, we will not wait,
When will you send again
To our supper
A dozen ...

However, this is not all the help that the Kyrgyz police expect from their Russian colleagues. In addition to the uniform, by the way, Bishkek asks Moscow for five BTR-80, 2 helicopters, 500 grenade launchers, 18 trucks, body armor, police helmets, radio stations, tents, Gazelle cars, 15 buses, SVD, pistols, night vision equipment and much another.

And one would think that Kyrgyzstan is going to buy all this from Russia, because the state is positioning itself, sort of like, independent and embarking on the path of a market economy. But no. Why buy when you can just ask well, because if Russia does not make fraternal concessions, then you can immediately begin a new round of bazaar trade regarding the location of the base in Kant and other Russian military facilities in Kyrgyzstan. Obviously, writing off a weighty debt in relation to Kyrgyzstan was not in vain and is already beginning to bear fruit ... We wanted the best, but got it ... After all, the write-off was aimed at more actively developing business partnership between the countries, more effectively agreeing to extend the period for the Russian base to the territory of Kyrgyzstan, and for the future to attract Bishkek on certain conditions to the Customs Union. However, Bishkek decided that if debt was written off, then you can go even further in communication with Russia: first, the form (they say, it’s still old and you don’t need it), then pistols, armored personnel carriers, helicopters, and then you can rely on some Something impressive loan, which in the end will still remain without payment.

No, no one is going to argue with the fact that Russia is not a poor country, and can afford to share with the fraternal people of Kyrgyzstan (and even more so with its militia). But somehow, lately, Russia itself has been accustomed to the fact that there can only be cheese in the world where it is free in the world. And if the agreements on payment of the lease of the territory in Kyrgyzstan by the Russian army are signed, then the next requests to write off something in exchange for the same Kant, to forgive, subject to restructuring or send in the form of humanitarian aid - very much looks like banal blackmail. Like, if you want to be friends with the states, then let us - coax us more, coax us completely. Yes, we, in principle, do not mind. Friends decided to give gifts, but only история teaches us something ... There were times when Russia, out of the goodness of her soul, was sprayed on improving life in the same Baltic republics, exposing them as a Soviet showcase. In one state, it seemed, they lived, and therefore the division to the first and second class was clearly not appropriate. But for some reason now, all these investments appear as “occupational insinuations”, used to confuse the ordinary Baltic citizen, who at all times aims at the path of democratization and independence. At least, the authorities of the three states “exhausted by the Soviet occupation” say exactly that. And where is the guarantee that such claims will not be made to us again: an attempt to “buy” incorruptible Kyrgyz law enforcement structures, for example ... Indeed, in this Central Asian country, the authorities can change with almost uncontrolled regularity. And with the huge desire of external and internal forces, the power of Kyrgyzstan can hardly be saved by the Kyrgyz police, equipped with the old Russian uniform, even if armed with Russian sniper rifles and night vision devices. Here we need to choose completely different mechanisms of cooperation (once again: it is cooperation, and not the fact that this concept is replaced), and not statements about the need to provide more than strange humanitarian assistance.

And in general, since when did pistols, helicopters and BTR-80 come to be counted as humanitarian aid? ..

It is worth noting that Russia has plans for the almost complete rearmament of the Kyrgyz army (of course, with the active support of these plans from Kyrgyzstan itself), which should begin to be implemented next year. For certain reasons, this will have to rid Kyrgyzstan of foreign (American) dependence in the supply of equipment and equipment. weapons. Taking into account the fact that the number of the Kyrgyz army is about 15 thousands of people, rearmament would look quite real. True, in this case it is necessary to take into account the fact that for the time being with the rearmament of the Russian army itself everything goes, to put it mildly, not quite smoothly. And about the fact that it is necessary to re-equip not only the army of Kyrgyzstan, but the units of the Ministry of Internal Affairs of this country, it seems, there was no question at all ...

Apparently, the Kyrgyz authorities again show some special arithmetic, according to which friendship between countries should be based solely on the material component. Something like: helicopters and armored personnel carriers in exchange for an indestructible friendship ...