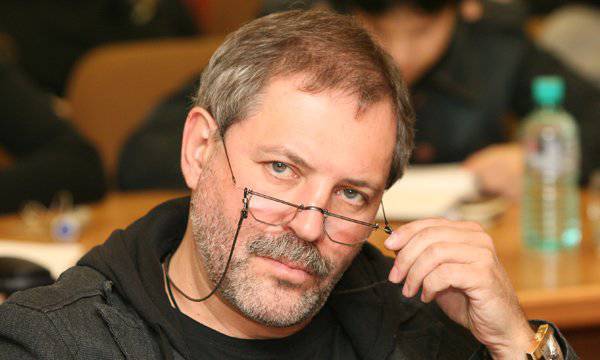 The Great Swamp Protest did not survive its anniversary. The Coordination Council, born in the throes of intellectual reflection, has nothing to coordinate in general. The only thing that the marshlands achieved was an impressive and representative vote for Putin, who was allowed to conduct a substantial electoral campaign by the marsh movement. It must be admitted that it was impossible to conduct such a campaign without the presence of a demonstrative swamp threat, since the authorities in effect did not demonstrate any meaningful policy at that time.

In the summer, we called the process taking place in the swamp movement “loosening protest”. A lot was said about why the Internet hamster, the main social support of the movement, left it. Here the main fact is that the hamster process is loud. That is resolved. Forever and ever. It is impossible to return the hamster to this protest, and for any other possible and probable protest the hamster is not needed, and he will not go. Therefore, there will be no revival of this protest. We state this not with gloating, but with regret and even fear, since this protest could not cause any fear at all.

Why is hamster protest in principle unpromising where the state really exists and the power is functioning, although somehow conscious of itself? We have already said that the peculiarity of the Internet public is that it can be manipulated, and quite easily, by choosing the right moment and theme. But it is absolutely impossible to lead. At that moment, when the hamster mass feels that it is beginning to be controlled and controlled, it dissolves instantly. And for a real revolution, real leaders and a truly controlled mass are needed.

The swamp movement is essentially an intra-elite movement. Exactly its localization of Moscow is connected with this. Such a public in a fairly representative amount is nowhere else but Moscow, even in St. Petersburg. As this public, all this office managerial journalist-planetary plankton is the attendant of our elite kleptocracy, localized in Moscow. By the way, in this context it is very funny when, on behalf of this public, they are calling for the fight against corruption. In the event of a victory over corruption, it will not even have to be exterminated, it will simply die of hunger.

That is, the swamp movement is a typical Orange. Raw materials for the production of "orange revolutions". The “orange revolutions” are different from the revolutions of the present, that they are not revolutions — they are intra-elite coups, while revolution is a change of elites. The extermination of the old elites new. The Orange Revolutions is a replacement for the less comprador elite grouping for the more comprador one. The “Orange Revolution” cannot overthrow the government if it really exists as a government. And not as a system of indigenous management, with sovereignty over which the external owner has. Since its scheme implies the need to ask permissions, whether it is possible for the native ruler to keep his chair or is it time to hand it over to a more attractive candidate for the host. By the way, the very fact of the manifestation of a marshland is evidence that a large part of the Russian elites had the impression that there is no such authority in Russia. And you can try.

In fact, any political process, whether it is carried out through elections, succession to the throne, coups, in any state system, call it at least a democracy, a dictatorship, is essentially divided by only one sign: is it a mechanism of reproduction of the power of the current elite or is it a scrapping there is a change of elites - a social revolution.

Swamp protest, of course, no social revolution, and even an attempt was not such. This is an uprising of the comprador elite against the government. In any case, against its element, which is such a government in the Russian historical sense, is, simply put, against Putin V.V. What is the elite, and such an uprising. Recall that on the eve of the 1905 revolution, our bourgeoisie developed its specific form of protest. We know from Soviet storiesthat a form of protest of the peasantry is a revolt, the proletariat is a strike. And the form of protest by our bourgeoisie is a “banquet company” when an abundant feast gathers at which toasts of anti-government content are made.

The comprador-bourgeois-democratic quasi-revolution in Russia failed. Just as she fell and will always fall. Social protests and, God forbid, a social revolution in Russia are possible and quite likely with a sharp aggravation of the economic situation. And such a complication is almost inevitable. The fact that the current marsh and potholder public will receive little pleasure from such a revolution is little consolation.

Only one way out: luring protest must be accompanied by loosening power. In principle, we have a simple alternative. A) Rise of power against the elite. A direct appeal to the people through the head of existing elites. Actually, the current government is turning this way, however, mainly for image trivialities. But even this provides her with legitimacy. Until. B) The uprising of the people against the elite and the authorities. What will mean at the same time that the authorities in the real historically Russian sense no longer exist. As it was not, for example, in October 1917 th. In our particular case, this may mean a state suicide of the Russian people.

Actually, the only rational way out for the current government is to carry out a social revolution from above — to change the current elite. There are no motives for not doing this. The first. Since the current elite - marauding, comprador and worthless - merges the country. The second. Since this elite has clearly formulated and openly verbalizes rigidly anti-state and anti-national political course and ideology, in which no systemic positive activity is possible. And openly introduces it within the current system of government. Third. Since, in fact, this elite has already rebelled against the current government, that is, it bit the hand that feeds it. To continue feeding a mad dog with hands is counterproductive.

PS Regarding the remarks of our old revolutionary Delyagin that "for the crisis in Russia, only the Russian youth are lacking." The point is not that the ethno-demographic catastrophe described by the author is somewhat exaggerated. The point is youth as such. From a social point of view, youth is a serious mental illness that inevitably goes away with age. True, if before this age will be able to live. As the individual, and country of residence. Our other author, Iskander Valitov, very accurately describes the social illness of our society, reflected in the protest movement, the emotional lack of the will to self-restraint characteristic of children. The advantage of "youth" over mature people is that there is less intelligence, education, experience, professionalism, responsibility - socialization in general. More reactivity, spontaneity, naive maximalism, unfulfilled ambitions, sexual attraction and physical strength. But the advantage is only for those who want to commit any large-scale disgrace.