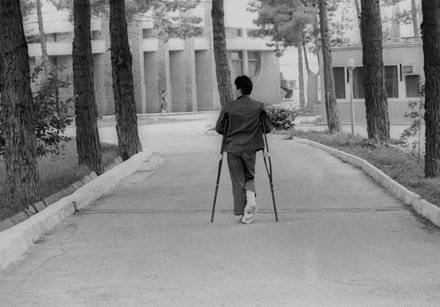 I have long wanted to write about the so-called "veterans" of the Afghan, Chechen and other wars. When I see these mummers in camouflage, parasitizing on the holy feeling for each of us, for some reason, the so-called deaf-mutes are remembered, which still spread out printed products in electric trains and long-distance trains. Young healthy guys mow under those who once saw in the post-war trains. Yes, after the war, thousands of demobilized soldiers walked around the country who could not find themselves in a peaceful life. And then many played the role of "war veterans", which can be judged by the songs of those years - "I was a battalion reconnaissance" and "fascist bullet-villain tore off my ability." How many "children of Lieutenant Schmidt" went around the cities and villages, nobody knows. Like the current number of tax collectors in camouflage, for which he simply props.

Once in the ATS led one such figure. “I was in Chechnya, in the city of Kabul. Or where? Oh! Is Kabul in Afghanistan? Exactly - in Grozny I was in a hot spot, ”he argued, breathing heavily in fume.

So they go fishing, not knowing the name of the country in which he fought and lost his leg-arm.

They take to others - with hysterical voices and words, which are penetrating to the depths of the soul. “People, people, look at me, in front of you is a hero, whom the motherland has forgotten about! Remember, at least you, at least a part of your kindness, donate to me for food! ”Or again:“ This is how the country treats the heroes. And I shed blood for Russia, I lost two legs, eight operations and a complete amputation. Cut off in parts, fifty fragments in the legs were stuck in the chest ... "

Yes, the wars of recent years have crushed a huge number of men with their millstones. Someone died in battles, someone died from injuries in hospitals, someone has heavy marks of fights on his body all his life. Any war is dirt, blood, pain, crippled destinies and psychological breakdowns ... Honor, fame and money are not about them, soldiers and officers. More often - red tape, dishonesty, indifference. There are thousands of disabled people, “Afghans” of 28, and many will tell you how many humiliations they had to endure after the war. But even the pain and emotional wounds pushed on the panel unit.

The doctor of the military hospital told about this case. In the subway car he approached, as it seemed to him, to the former warrior. That one had no legs. He began to talk about the fact that now the prosthesis can be made for free ... But he did not have time to finish it - the invalid with an unprecedented agility rushed to the other end of the car.

But who are these “camouflage”, who, sitting in wheelchairs and demonstrating the absence of limbs, tell “horror stories” about how they served and fought, became cripples, and their own country, whose interests they defended, cannot provide normal treatment and further rehabilitation ?

Yes, there are real people with disabilities among them, only they received their injuries not on the battlefield, but in everyday life, at work or in drunken clashes. Once in the northeast of the capital, the police brought to administrative responsibility a beggar who pretended to be a combatant. And that's what turned out. A certain Alexander Prokhorov arrived in the capital from the Vologda region at the invitation of distant relatives who promised to employ him. His left leg was amputated after he, being intoxicated, spent the night on a December winter evening on the street. In the army, Prokhorov did not serve. The enterprising relatives, without thinking twice, “attached” him to beg, which he did for a long time. Naturally, in camouflage.

Another “veteran” Sergey Moiseenko comes from Kazakhstan. He also lost his right leg along a drunken bench, landing under a tractor caterpillar. In the city he was being kept by some “good” people who brought him by car to “work” every morning and took him to the doss house late in the evening. The reward from the grateful hosts was a meager dinner and a couple glasses of cheap vodka.

In the last year, we note, many “victims of the South Ossetian conflict” appeared: in camouflage and without it, they tell plaintiffs to passersby stories about the night bombing of Tskhinval, the flight from the destroyed city, the lost house and so on. At the Preobrazhenskaya Ploshchad metro station, a legless invalid with an accordion was installed a sign: “Help the victim of Georgian aggression. My house in Tskhinval is destroyed, the family is killed! ”

Among these people have their own "legendary personality." For example, Sergei Prikhodov, nicknamed General. He got his loud nickname when he pulled a wallet from an underling military man in a strip at the Kazan railway station. In prison spent 18 years. For a long time, he traded at three stations. In 1996, he received another prison sentence. When he returned, the orders on Pleshka were completely different. I had to change the "profession". Pickpocketing no longer hunted: they say, and the hands were not the same, and the eye went out. For several years, the General asked for alms on Taganskaya Square. To the compassionate prostitutes, he seems to be an “Afghan”. To be convincing, I wrapped my leg every morning with a dirty bandage and took a crutch with me. Passers-by told incredible stories about how, under Kandahar, he was surrounded, wounded and saved the regimental flag. People, believing the fake warrior, filed. Where is now the General, I can not say.

Here is a recently seen picture. Four good young men in camouflage and blue berets were singing in the subway car a hysterical song about the harsh everyday life of a soldier in the distant Afghan region, where bullets whistle and evil Mujahideen ring less and less ...

As for the veterans of Afghanistan, it seemed strange, since the youngest fighters who marched through Kandahar and Hindu Kush are now in their forties. None of the quartet at this age is not pulled.

It was lunchtime, because at rush hour in a crowded carriages a large team would not make it. But for some reason, the strong guys were not at work, but on the subway, with a guitar ... I admit, they didn’t evoke compassion on their beer stomachs and far from emaciated faces. But everyone relied on the wand, painstakingly portraying a war invalid, and the guys sang with a soul, in general, they were given money. The funds, as the tablet testified, were intended to help the families of the victims. However, an attempt to talk with them about the affairs of the noble was perceived in hostility. Although it seemed that they hide? Apparently, the "smell" of charity was with a scent.

I do not want to talk about the image of the octopus, which has gotten the edge of the octopus, which is called the "mafia of the poor," pulling the tentacles to the wallets of pitiful citizens. It's about something else. Those who serve tomorrow, their parents and acquaintances look at these false veterans. And they think: why? So that, having returned a cripple, can you make your way along the aisle in a crowded subway car? Others, looking at a “serviceman” person, think with disdain about the army, which threw the “waste material” overboard of life. And indeed, is it really a miserable pension and an iron mug for alms - that's all that yesterday’s defenders of the Fatherland can count on?

It is hardly necessary to appeal to the conscience of the "veterans" who have begun to foul in our shameless time.

What did the Russian Orthodox Church do when people dressed in cassocks flooded subway cars and crossings? In August, 2000, the Bishops' Council of the Russian Orthodox Church issued a special definition: “In conditions when priestly and monastic clothes are sometimes used by fraudsters, the council considered it inadmissible to collect donations by clergymen and monastics in public places ...”

How many today see mummers in robes? What is not the result?

Real disabled people who really need our mercy are usually invisible in the city bustle. They stand modestly on the sidelines, silently beg, silently starving and just silently die.