Efficiency of the US Army

November 10, 2010
11
Most of the military analysts, and even ordinary people, will answer the question “which is the strongest army in the world” without hesitation, that it is the American one. After all, it is the US Army that has the most modern models of military equipment, and besides, it is fully equipped with contract soldiers, and the amount spent on expenses of the American army is impressive - this is 600 billion dollars a year. For comparison, the budget of the Russian army is only 20 billion dollars. Does this mean that our army is 30 times less efficient than the American? Not at all, just look at the recent "successes" of Americans in Iraq and Afghanistan. In both countries, US troops have been around for about 10 years, but they have not only failed to normalize the situation, but rather the situation is getting worse every year. The number of terrorist attacks in Iraq is increasing, the Taliban in Afghanistan is regaining its former strength, and as a result, personnel losses are constantly increasing. 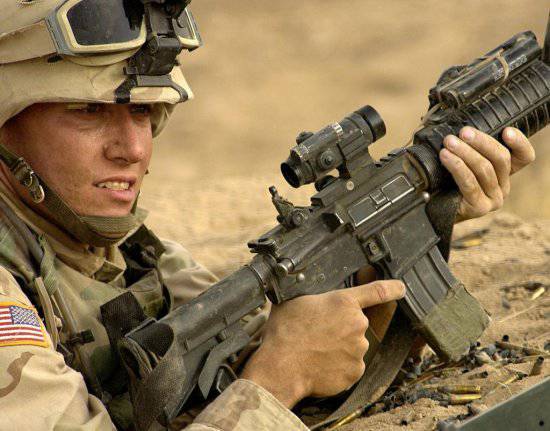 Why is this happening? Why is the US Army for several weeks or even days capable of breaking the resistance of the enemy, destroying its military and civilian infrastructure, but is unable to reliably occupy the territory and prevent the enemy from regaining their strength. The fact of the matter is that the contract army, which is so much praised by the Americans and which was almost introduced in Russia and is not able to fulfill these goals. The contract army is good at fighting with small countries with weaker armed forces, such as Panama (1989-1990) and Grenada (1983), where the Americans managed to conduct short-term and almost bloodless military operations. However, at that time they were not faced with the task of occupying the territory, and the local population for the most part supported the United States. But the situation in Afghanistan and Iraq is already completely different. история.

The local population with undisguised negativity refers to the presence of American armed forces in their country and is not eager to help them. Thus, the Americans need to rely only on their own strength, and there are not so many of them. According to estimates by well-known military analysts, to maintain a stable situation in Iraq, a military force of 400-500 thousand people is needed, and in the entire US Army at the moment only 1,3 million people. The most important thing is that it is almost impossible to increase this number, since the budget of the American army, as already mentioned above, makes up a huge amount. It is impossible to spend more, especially when there are big problems in the American economy, and even if there were money, it would not be possible to significantly increase the number of contractors. Despite a decent salary and all sorts of benefits, who want to serve in the US Army every year less and less. The fact is that the level of life in the States is so high and without much difficulty, you can find a good job without the risk of being killed during a business trip to Iraq or Afghanistan. Not for nothing are so many women serving in the US Army (15 percent of all military personnel) - this is not a good life, but hopelessness.

Returning to the conscript army is also not possible. Firstly, it is extremely difficult to do from a practical point of view, since the Americans have become accustomed to the current way of life, and it is unlikely that they will be able to change something. Secondly, the current US military campaigns in Afghanistan and Iraq are extremely unpopular, not only in the world, but also in America itself, and hardly the parents of draftees, and even draftees themselves will be happy to go to another continent to fight for imaginary "democracy" in which countries they don't really know anything. Thus, the president, who will propose to move to the draft army, is likely to face immediate impeachment, which means no one will risk it.

It turns out that the US government is at an impasse, from which it is extremely difficult to get out. It foolishly got involved in two protracted wars and can never finish them. Just to leave Iraq and Afghanistan actually means admitting defeat and spoiling your reputation as a “great nation,” which was already the end of the Vietnam War. On the other hand, it also makes no sense to continue both campaigns - it will still not be possible to normalize the situation, since the more US troops occupy the territory of Iraq and Afghanistan, the more this irritates the local population, and this in turn complicates the situation. In addition, American taxpayers are increasingly asking the question of what their money is spent on and why, after all, the States have these military campaigns.

If in the next 5 years the United States somehow fails to end the wars in Iraq and Afghanistan, it will certainly affect the economic situation in the country and, in any case, the army costs will have to be reduced, and hence the reputation of the strongest army in the world may soon lose. Americans can only blame themselves. It is their restless passion for domination in the whole world that can knock them down - after all, they have never learned anything from the example of the collapse of the USSR. Consequently, the US Army does not currently pose any particular danger either for Russia or even for countries such as North Korea or Iran. It is now clear to them that they are not able to wage a full-fledged war against more or less large countries. For this they will not have enough human resources or financial.
Ctrl Enter
Noticed oshЫbku Highlight text and press. Ctrl + Enter
Military Reviewin Yandex News
Military Reviewin Yandex Zen
11 comments
Ad