New symbol of Volgograd instead of Motherland?

December 3 2012
348
After a group of Volgograd officials successfully flew to Italy as part of an "official" trip that cost the hero city and its taxpayers a lump sum, apparently, an administrative mechanism completely stuck with the city authorities, and more and more began to be born. original ideas. So the other day from the city on the banks of the Volga came the information that the local authorities are going to offer the world a new city symbol. It turns out that the world-famous symbol of Volgograd-Stalingrad as a hero-city, in which a truly epochal battle took place during the Great Patriotic War, no longer suits the army of Volgograd officials ... 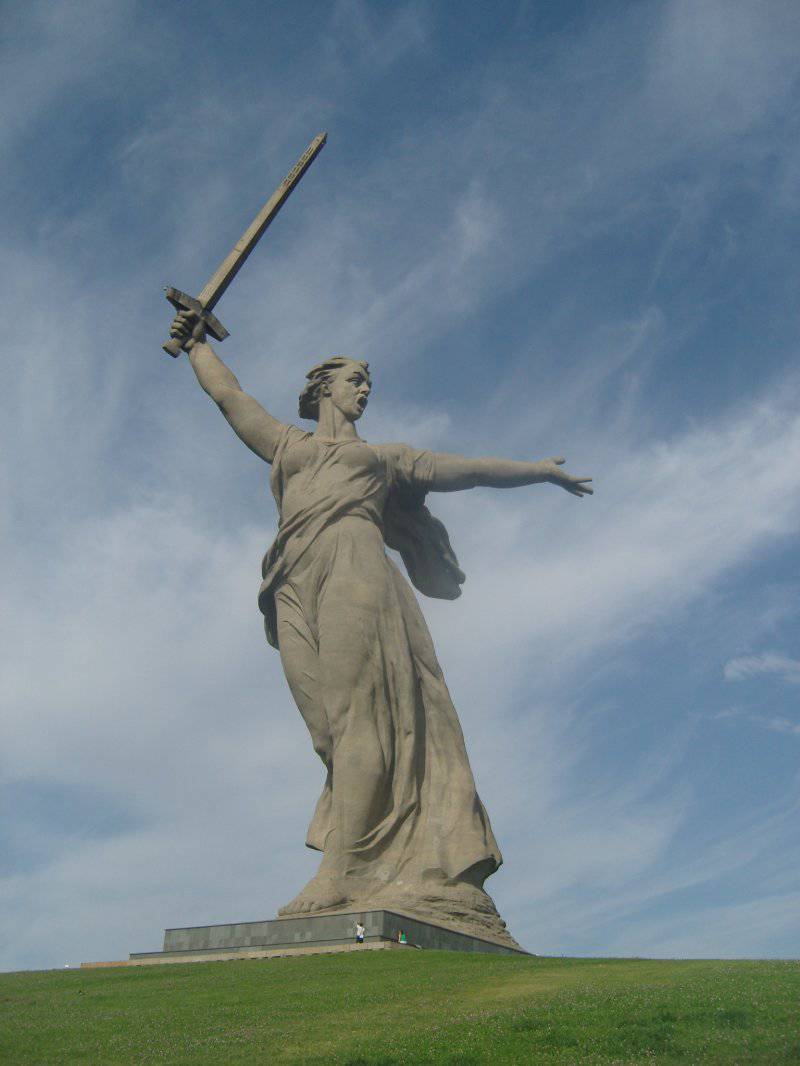 The fact that such a department as the state institution “Tourism Development Agency” of Volgograd with the active support of the Committee for Youth Policy, the Department of Foreign Relations Administration and the Agency for the Development of Cultural Initiatives of the Volgograd region, suddenly decided that the symbol of the hero city, namely the world famous the statue of E.Vuchetich "Motherland is calling!", is, quote:

“... the legacy of Soviet times. She (the statue) is associated with something so heavy, tragic, mourning. Especially from foreigners. And we would like our territory to be perceived as pleasant for recreation. ”

"The winning brand for many years to come will become a symbol of one of the most famous Russian cities, will spread across millions of copies in the country and foreign countries, making Volgograd closer and more understandable for millions of people around the world."

Hmmm ... Apparently, the sun illuminating the beaches of the Italian resorts and the famous wine from the Apennine Peninsula so strongly impacted Volgograd officials from various agencies, committees and departments that since April (since that very "business trip") many of them have not can The organizers of the competition seem to forget, and what makes Volgograd thereby a world-famous city ... They also forget that all these initiatives about the "rebranding" can, on the contrary, cause skepticism among the same tourists who come to the city like in a glorious military city stories, the city of the Great Victory. And then, you see, to some tourist at the sight of the Motherland, he doesn’t have a good time ... Yes, for God's sake - let him go to where there are palm trees, beaches and bikinis. Who forbids? ..

Yes, of course, the Battle of Stalingrad itself is a tragic event in the history of our country, but the same event spread the news about the unparalleled courage and resilience of our people, that the fascist armada suffered a crushing defeat around the Volga which has changed the course of the Great Patriotic War, and the entire Second World War. If someone's feat of the Soviet soldier in Stalingrad causes negative emotions, then is it worth it to listen to the opinion of this person. Indeed, in any city there is one who will argue with foaming at the mouth that “they were fighting in vain”, that “now they would have drunk Bavarian beer long ago and have seized this business with fried sausages,” and such a person would say that he had negative associations with the form of "Motherland" on Mamaev Kurgan. Yes, he will declare anything, just to cover up his complete historical illiteracy and desire to play in the "new trends of democracy."

Maybe even on the occasion to go, and rearrange the statue somewhere far away so that the tourist would be at ease and “cool”.
In general, the competition for a new brand of the city, “pleasant for rest”, has been announced. Summing up its results, if, of course, the authorities of Volgograd are suddenly not fully aware of the entire stupidity of the project, should take place as early as this month. The organizers call on all creative citizens to develop a draft of a new (“positive”) symbol of the city of Volgograd, which would attract turbulent flows of foreigners to the banks of the Volga. Interestingly, the ideological inspirers of this kind of competition are going to see, and indeed, they have thoughts in their heads that any sensible person will be ready to associate Volgograd not with the Battle of Stalingrad and the sculpture of Vuchetich’s authorship, but with the embodiment of the fantasy of creatives who aimed to like guests ...
In this case, we can assume what projects may appear in the near future. Projects that can attract the attention of foreign tourists.

Project one: a statue of a Volgograd bureaucrats flying to Italy on a charter flight.
The second project: the monument "Magnitsky List", and next to three statues of soloists "Pussy Riot", covering the height of "Motherland".
The third project: the monument "New dancing Volgograd bridge for endts billion rubles."
The fourth project: a monument to Barack Obama with open arms in front of the administration building (generally a win-win option to attract foreign tourists).

In general, there are more than enough options here, and if you consider how much each of them may require money from the budget, then, in principle, the purpose of such a competition becomes more than obvious. After all, officials and wives, and children have, they also want to eat and dress up like ... And on one "Motherland", apparently, all proliferated Volgograd politicians have a hard time to feed themselves ...
However, realizing the stupidity of the situation in which they themselves found themselves, city officials decided to justify themselves. In particular, before the townspeople and journalists decided to speak acting. Heads of Volgograd City Hall mister Sobakar. He noted that the initiative was not understood. In fact, there is no question of rebranding. They say that the city just wants to have a new "neutral" symbol, and the symbol of the Battle of Stalingrad will still remain the main one.

In general, as they say, reassured ...

Still, it would be much better if the army of Volgograd officials did not concern themselves with the creation of “new” symbols, but solved much more pressing issues: repair of roads, stadiums, bridges, raising living standards, transportation problems, agricultural development, cleaning littered with garbage Volga beaches, finally. And if you drive around on budget money in “Italy”, will you be able to keep up with everything? 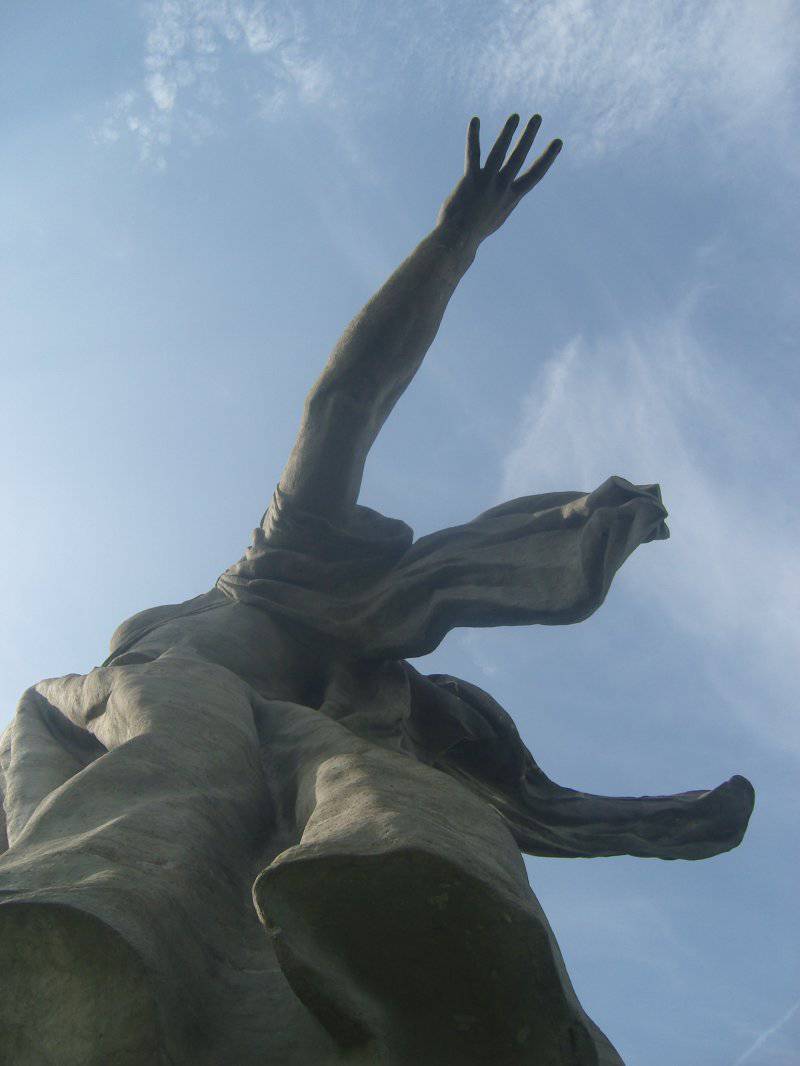 PS The authorities of Berlin do not declare that the memorial in Treptow Park causes negative emotions in someone. So why should the authorities of Volgograd be like those who push the idea of ​​a break with the past in Latvia or Estonia ... One thing pleases: the symbols of the hero city and the memory of the feat will remain, but the officials are temporary people.

The officials who suggested changing the symbol of Volgograd and announced a competition for a new graphic designation of the city were punished. About it on Monday, December 3, reports RIA News with reference to the deputy head of the city administration, Alexander Maslov.
In total, four officials were involved in the scandalous competition for the symbol of the city, the administration said. One of them is fired. What kind of punishment awaits the remaining three officials, not specified.

Last week, the media reported that the mayor of Volgograd announced a competition for a new symbol of the city, as the existing symbol is the image of the sculpture "Motherland is calling!" on Mamayev Kurgan - allegedly unattractive for tourists.

The government of the region said that the initiative belongs to the city mayor’s office, and the possibility of changing the symbol was not discussed either with the local cabinet or with the public. The Volgograd mayor's office reported that the competition for the creation of a symbol of the city was held by the city department of foreign relations, but not for the purpose of rebranding, but in order to tell about the modern sights of the city. Were they going to completely abandon the use of the current symbol of the city, or simply wanted to introduce another one, it wasn’t specified.

The initiative of the city department of foreign relations was perceived, on the whole, critically. Acting head of the administration of Volgograd Vladimir Sobakar spoke against changing the character, noting that the “brand” of Volgograd is the Battle of Stalingrad, embodied in the monument “The Motherland Calls!” State Duma deputy, coordinator of the patriotic platform of the United Russia party, Irina Yarovaya, called for punishing officials who wanted to change the symbol of the city, calling them incompetent, and their initiative was stupid.

According to Sobakar, there was not a single proposal for changing the symbol of Volgograd, and the results of the competition should have been announced on October 19. At the same time, according to Nezavisimaya Gazeta, it was planned to take in applications for the competition until December 17.