December 1 2012
17
November 30 - anniversary of the brilliant victory of the Russian fleet in Sinop Bay, on the northern coast of Turkey. On this day 159 years ago (November 18 (30), 1853), a Russian squadron under the command of Admiral Pavel Stepanovich Nakhimov defeated the Turkish fleet.

Background and concept of the battle
Turkey, pushed to the beginning of active hostilities with Russia, its main geopolitical opponents at that time - England and France, marked the beginning of the Crimean War 1853-1856. In November 1853, a squadron commanded by Osman Pasha came out of Istanbul, the Turks planned to land troops on the Caucasian coast of the Black Sea, in the areas of Sukhum and Poti. After a few hundred miles, the Turkish ships embarked on a raid at Sinop. Having learned about the location of the Turkish squadron, Vice-Admiral PS Nakhimov moved his ships in the direction of the bay and blocked it from the sea. Due to the fact that in the conditions of the battle in the open sea, the Turkish squadron could receive reinforcements in the form of ships of the Anglo-French fleet, stationed in the Dardanelles strait and ready to support their Turkish allies at any time. Thus, the time for the attack of the Turkish squadron was more suitable. Nakhimov's intention was to suddenly break into the Sinop raid and attack the Turkish fleet from a short distance in a resolute and bold manner. 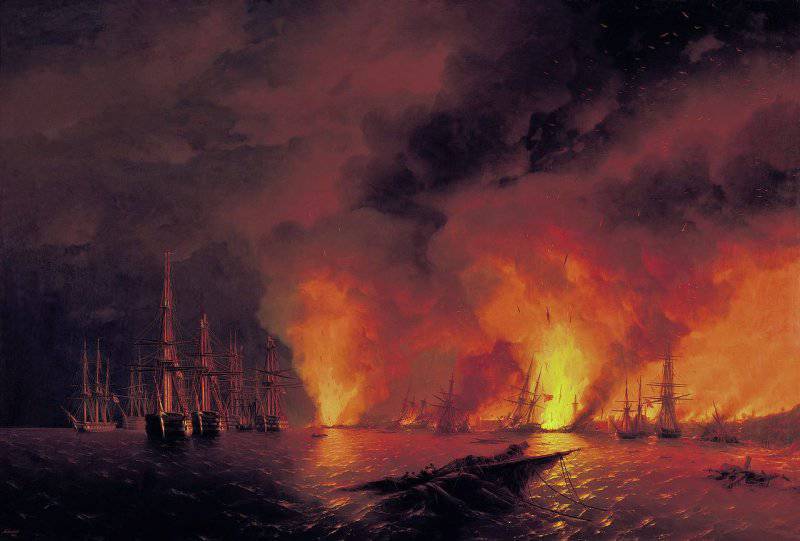 The course of the battle
The naval battle at Cape Sinop began at around noon and lasted almost 17 hours. The first volleys of the battle were made by Turkish ships and coastal batteries - the Turks tried to stop the Russian squadron at the entrance to the Sinop raid. However, the ships of Nakhimov, skillfully maneuvering and using their superiority in artillery, opened a powerful return fire. Shortly after the battle began, the flagship of the Turkish squadron Avni-Allah and one of its main ships, the frigate Fazly-Allah, caught fire and ran aground. The well-aimed Russian cannon fire sank or seriously damaged the enemy's 15 ships and silenced all the coastal artillery of the Turks. Only one Turkish ship “Taif” managed to survive, the commander of which was an experienced English naval officer A. Slade, who served the Ottomans as a naval adviser. However, the matter was not at all in the mastery of the captain, but in the new possibilities that his steam engine gave the ship. The Battle of Sinop is a bright ending of the era of the sailing fleet, soon the sails forever left the masts of warships ... 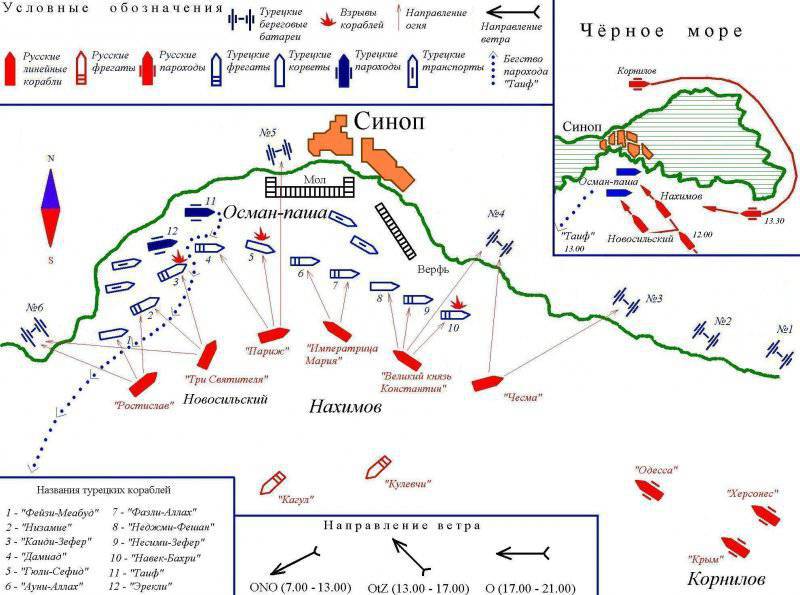 Battle results
In the battle at Sinop Bay, the Turks lost almost the entire squadron (15 from 16 ships) and more than 3000 sailors and officers. Around 200 the Turks were captured, among them was the commander of the Osman Pasha squadron and the commanders of several ships. Russian losses were hundreds of times smaller and made up 37 people killed and about 230 injured. Damage to the ships were minor.

As a result of the defeat of the Turkish fleet in the battle at Cape Sinop, Turkey was significantly weakened, and its plans for a landing on the Black Sea coast of the Caucasus were thwarted. 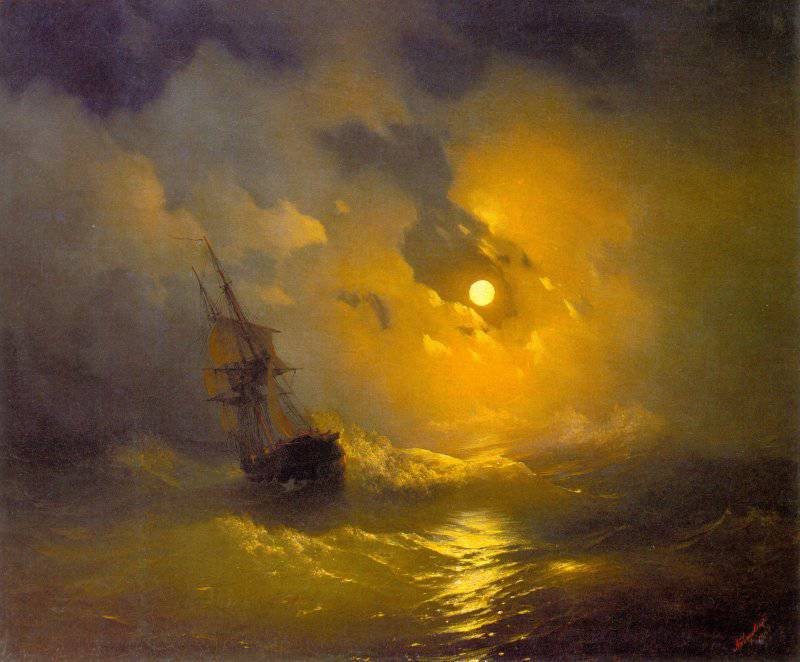 I.K. Aivazovsky. Storm on the sea at night. 1849. The squadron of Nakhimov before the Sinope battle had to be cruised in the autumn Black Sea, where at that time every third day there was a storm. The Russian fleet endured the same storm on the eve of the battle, which is why the Turks did not expect a decisive attack. 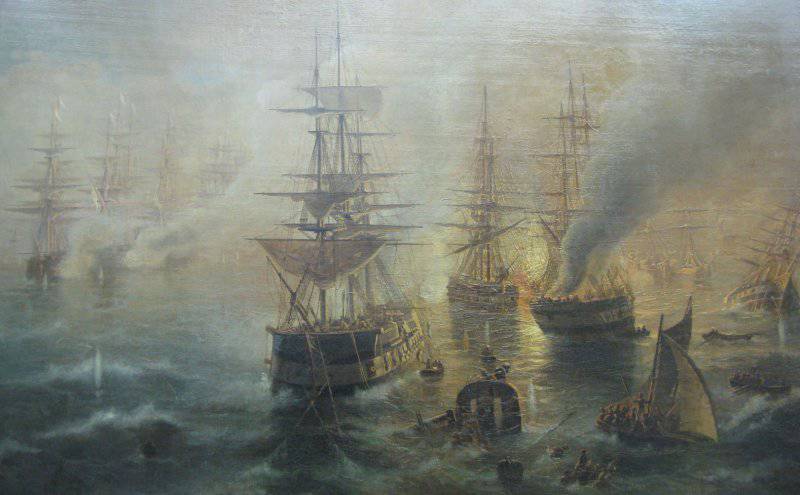 Turkish sailors flee from burning and sinking ships. Fragment of the painting by R.K. Zhukovsky "Sinop battle in 1853 year" 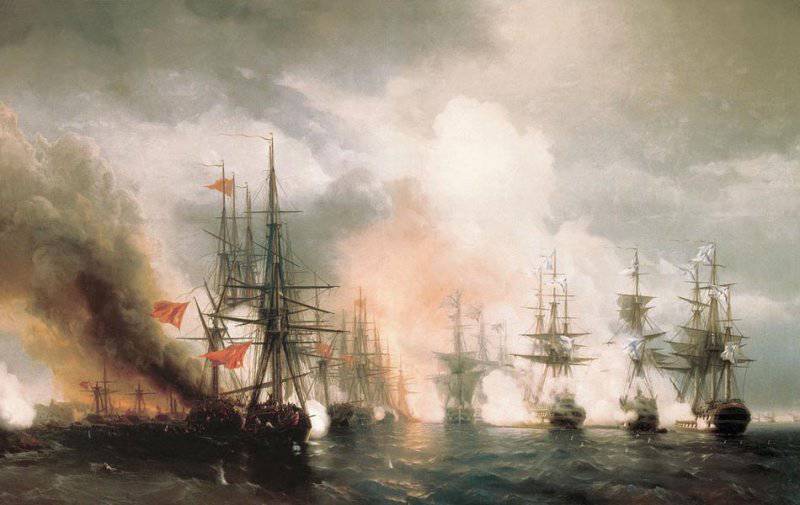 Painting I.K. Aivazovsky "Sinop fight" (1853) written according to the battle 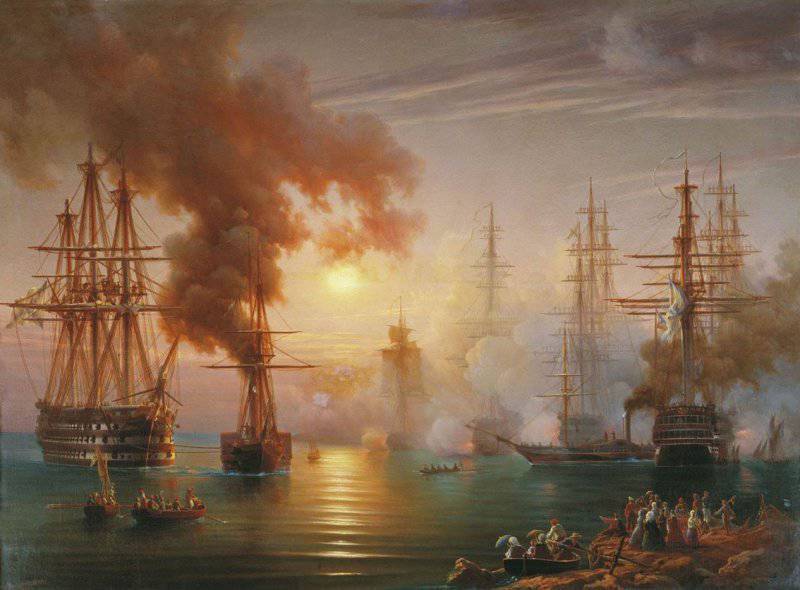