November 30, 2012
184
The country is multinational, multi-religious. There are enough problems in any region, and, as the classic said, the unhappy are not happy in their own way ... While some people enthusiastically appeal for the indispensable transition to the contractual basis of the Russian army with the hope that most often involves personal unwillingness to fulfill their constitutional duty in terms of army service; others by all means advocate an increase in draft quotas for those regions in which they themselves live. 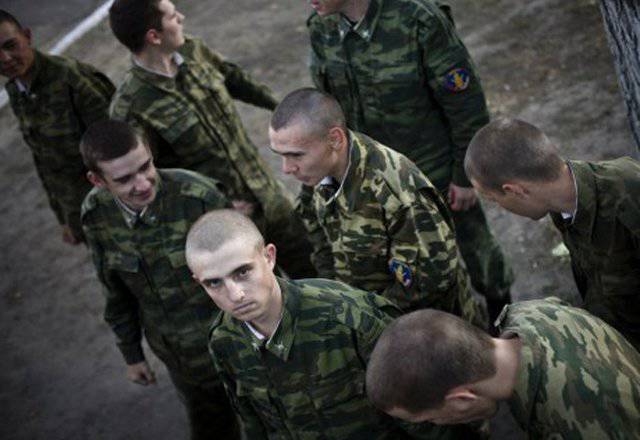 The appeal of 11 parliamentarians from the Republic of Dagestan, among whom was State Duma deputy Gadzhimet Safaraliev, made a lot of noise to the Minister of Defense Sergei Shoigu with a request to increase the draft quotas to increase the ability of Dagestan young people to serve in the army. The fact is that today no more than two hundred representatives of Dagestan are called up to the Russian army for the fall or spring campaign. In particular, the current autumn draft was designed to recruit Dagestanis (young representatives of various nationalities living in this North Caucasian republic) into the ranks of 179 RA. For some, this number seemed to be more than sufficient, based on the disciplinary peculiarities of Dagestan youth, to others it seems that 179 people are completely unacceptable, which does not make up 1% of the number of people willing to serve Dagestanis from 18 to 27 years.

Dagestani deputies offered the Minister of Defense to increase the quota for Dagestan to 4 thousand people during the spring draft of the next year. And, according to some sources, Sergei Shoigu is ready to meet the needs of the Dagestan deputies and, accordingly, Dagestan youth who wish to serve in the Russian army.

This kind of message causes rather contradictory emotions. Why? Because the multiple reduction of the quota for the call of the Dagestanis to the ranks of the Russian army was due to the extremely low level of discipline of representatives of various nationalities who were drafted from Dagestan and other republics of the North Caucasus. For some time, the conflict litter, as is often the case, tried not to endure from the hut, but over time the problem only increased in new and new volumes, and broke through to the outside by itself. For how long Dagestani military personnel serving on conscription, from the norms of statutory relations, have been talking about, have been talked about for many years. And sometimes it came down to very unfavorable cases, when even the smallest group of soldiers called up from the same Dagestan to the military part of Russia's central zone (the Urals, Siberia, the Far East or any other region) could build a system of relations in such a way that all the rest servicemen fell into a certain kind of dependence on the "Dagestan rules of the game." At the same time, the dependence could concern not only conscript soldiers representing other nationalities, but also officers of the military unit. At best, they tried to look at the problem through their fingers, and at worst, there was some kind of fear before the will of the Dagestanis, before their solidarity and the indispensable desire to defend their positions.
In the end, the Ministry of Defense had to sign its helplessness about establishing authorized contact with Dagestan soldiers serving in conscription, and a very ambiguous decision was made to reduce the quota for Dagestan from 10-20 thousands of draftees per year to a couple of hundred ( ten times less than quotas that existed before 2010 year).

Someone saw this as a real panacea: they say, there are no Dagestanis - no problem. But in fact, the problem was simply transferred to a different direction, which, whether they wanted to go to the Ministry of Defense or not, provided food for thought on the topic of unity of the legal field of the Russian Federation. Indeed, the law spelled out in black and white the constitutional obligation of military service under conscription for all males between the ages from 18 to 27 years who have no medical contraindications or have not expressed a desire to do alternative civilian service. The law says nothing about the fact that the military department can conduct a kind of “competitive” selection based on nationality. The quota restriction here does not fit not only with the law, but also with the very state of affairs in the Russian army. After all, today problems with the implementation of draft standards are observed in many regions of Russia, and where young people openly express a desire to go to the conscription service, all of a sudden, restrictions or a total ban are imposed.
Opponents of the recruitment of Caucasians in the Russian army can say: why recruit into the army those who undermine discipline in it, often not only remembering the fighting brotherhood, but also frankly promoting their chosen ones. Words are to some extent reasonable, but there is another opinion on this.

Says lieutenant colonel of the Internal Troops of the Ministry of Internal Affairs M.Fyodorov:

The problem with conscripts from the Caucasus existed in Soviet times, not only in the Ministry of Defense, but also in the Ministry of Internal Affairs. At the end of 80, I had to serve as a platoon leader in one of the units in the Far East. The total number of fighters under my command in the first year of my “commanding” 24 man, two of which were Avars, and the rest were Russians and Ukrainians. So, I tell you, it was with these two Dagestanis that at first I had to sip in full.

It began with the fact that one of them stubbornly refused to participate in cleaning the barracks and take a cloth to clean the floor. Initially, I tried to put pressure on him with the provisions of the charter, but it did not bring its fruits. I had to work first in conjunction with the company commander, then the battalion. The reaction close to zero - “I won’t mess around in the dirt, I’m not a pig” - and that's it ... Seeing this, and the second one began to swing. Frankly, after such disobedience on the part of the two, I'm sorry, suckers, everything boiled in me. Now I understand that maybe he was wrong, maybe he got excited, but then he decided to just show who the master is in the platoon. In general, I summoned two to myself and, I will try to express myself decently, broke the faces of both with words that intelligibly explain that everyone has to clean up their own shit, and that the nannies are not here, but the pigs just do not clean anything. In general, some kind of applied psychology came out ... My other fighters heard everything perfectly. After that, the squad commander approached the Avars, handed them rags, they took ... They cleaned the floor, looked frowningly, but there was no more talk "pig - not pig". To be honest, the first time at night, in their corner of the barracks, slept badly - I was afraid to feel the knife in my back ... But then they even somehow got closer, got used to it.

When he took the post of battalion commander (this was after the collapse of the USSR), Dagestanis had to be dealt with more than once, and from the experience of each new call I was convinced that most of them were volitional, uncompromising, wayward, and the language was well understood and assimilated. But you need to be able to talk with them. But cohesion so we ourselves should learn from them ... They will never give their offense ...

It turns out that here it is necessary to exercise the so-called individual approach. To say that it is necessary to completely abandon the call of Chechens and Dagestanis, ostensibly because they all may turn into future fighters of gangs - this is only an excuse that the commanders in the field often do not want to solve the problem with discipline. Naturally, all officers would like to see in front of them only positive, educated, trained and certainly executive disciplined fighters. But so where are these to take ... Army, because it is also an educational system. And tolerance, it must be admitted, is clearly not a winning option. Breeding communities, national groups in a single military unit - this is the main way to reduce efficiency, to netavschine and other negative points.

One can argue for a long time that Caucasians should not be called for at all, as they try to live according to their own laws. But it is almost the same, as if the Ministry of Education and Science suggested that they not take to school those whose older brothers behaved badly in the Marivanna class. But here another question arises: if the teacher does not have the ability to calm the mischievous, then maybe it's not the mischievous, but the Marivanne itself ... After all, “paper pedagogy” is one thing, but real practice is quite another. In the army, such problems are no less acute, and therefore it is obvious complacency and an attempt to disguise one’s own lack of professionalism to write off everything solely on someone’s lack of discipline and the impossibility of correcting such behavior.

If many people admit that the whole thing is in the Caucasian mentality, then it means that it is necessary to prepare the officers accordingly to work with the same Dagestanis. In the end, it would be possible to develop a conscription system, under which the Dagestan guys could well maintain security at the proper level in their own republic. After all, if everyone here is eager to be in law enforcement agencies or units of the Emergencies Ministry after the army service (as the Dagestani deputies who turned to Shoigu say), then why not give the draftees such an opportunity initially. After all, Dagestan itself is far from the safest subject of the Russian Federation, and the additional units of local military conscripts clearly do not interfere with the republic. As they say, both safety will increase and the desire to “go to the forest” will decrease.

In general, the decision to increase the quota for Dagestan in terms of conscripts ultimately rests with the Ministry of Defense, but only with this the main military department should not follow the path “Caucasians are to blame for everything” in the event of problems. The training system for officers should be built today, including through the use of tools in working with different groups of the population. After all, we have no other (better) army by definition, but it is quite possible to make it as such (more effective and efficient) without national differentiations.