Putin and Erdogan: Brezhnev's record will be broken

November 30, 2012
62
December 3 Vladimir Putin intends to visit Istanbul. The purpose of the President’s trip to the Republic of Turkey is to participate in the third meeting of the Russian-Turkish High Level Cooperation Council. Agenda articulated in the diplomatic language as follows: trade and economic, investment, interregional and cultural-humanitarian cooperation, the implementation of joint strategic projects in the field of energy and cooperation in the banking sector. 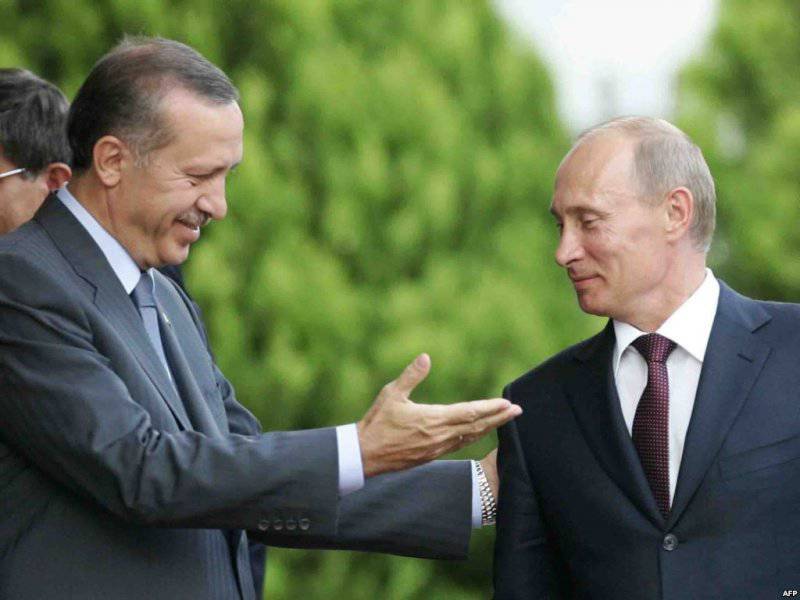 Vladimir Putin plans to exchange views on key international and regional issues with Turkish Prime Minister Recep Tayyip Erdogan. Of course, the leaders of the two countries will not pass over in silence the situation in the Middle East. It is also planned to discuss the state of affairs in the South Caucasus, Central Asia and the Balkans.

Press Secretary Dmitry Peskov said in October, notes Middle East Onlinethat Putin's trip to Turkey was originally scheduled for an earlier date. Also in some the news the opinion was expressed that this trip would not take place because of the fact that comrade Putin suffered a back injury. But Peskov now categorically denies that the president has any health problems.

Over the past ten years, the resource reports, Putin and Erdogan have established personal contacts and have done a lot to bring their countries closer, but political relations have become complicated because of the radically different positions of the two countries on Syria and the regime of President Bashar Assad.

“Moscow was just furious last month, when Turkey was forced to land the Ankara Moscow-Damascus plane and accuse Russia of smuggling weapons to Syria.

In addition, last week the Ministry of Foreign Affairs of Russia warned a NATO member Turkey regarding the deployment of Patriot missiles on the border with Syria: this, according to the Kremlin, would cause a serious conflict in the region. Turkey responded by saying that Russia has “absolutely no reason” to worry about these missiles.

Sabah writes that the talks between Russia and Turkey will be primarily devoted to discussing the situation in Syria, locating the Patriot air defense system on the Turkish-Syrian border, the possibility of filling up the oil deficit in Turkey due to additional supplies of fuel from Russia due to the refusal of the Turkish government on oil imports from Iran and some other issues.

An analyst at Haberturk.com is sure that one of the most important points of Putin’s visit to Turkey will be a kind of “soft solution” to the problem associated with the Russian cargo seized from the Syrian aircraft. As for the linking of Russian interests with Turkey’s request to NATO for the deployment of the Patriot system, Vladimir Putin, as the journalist believes, will “unequivocally warn” Erdogan.

The same Haberturk.com writes that Russia, like Iran, believes that the “Patriot” is not set against Syria, but against Iran.

The journalist “Sabah” notes that the rockets of the earth class - the air “Patriot” are used not for attacks, but for the purpose of defense. Russia's concern can be explained by the fact that the deployment of the Patriot near the Syrian border indicates Turkey’s desire to create a “no-fly zone”, which will in fact constitute a survival area for Syrian opposition members.

Haberturk.com cites Recep Erdogan’s reaction to Dmitry Medvedev’s statement that “Russia will stop arms shipments to Syria if international sanctions are imposed.” According to Erdogan, this is a "beneficial event that implies that Russia will change its position in the UN Security Council."

However, the columnist “Yeni Mesaj”, on the contrary, believes that, judging by Medvedev’s statement, Moscow will retain its former position, which it has “firmly defended” for a long time.

Representatives of the Union of Russian and Turkish businessmen, whose opinion is led by the newspaper Milliyet, believe that the likelihood of the negative impact of political differences during the meeting of heads of state on bilateral economic relations is low. Therefore, the focus of the visit will be on the investment area. Erman Ilıcak, chairman of the board of the Renaissance construction company in Turkey, argues that the partnership between Russia and Turkey is strategic. And even closer to the two countries will contribute to the construction of nuclear power plants in Akkuyu. Businessmen expect that during the visit of the Russian president to Istanbul a discussion will be held on issues related to the growth of bilateral investments.

The site "Rusya Analiz" On the eve of the visit of the Russian president to Istanbul, the Turkish analyst drew some parallels between Putin and Erdogan, which allowed him to conclude that there is a lot in common between these political leaders.

Firstly, between the two is obviously similar, the author believes, - they are telling the truth.

Secondly, the outcome of the policies of both is stability at home. After 31 December 1999, Yeltsin gave his chair to Putin, the whole world was surprised. And Comrade Putin soon became one of the important figures in world politics. Stability in Russia is his merit. The new regional division, the Turkish journalist writes, is the strengthening of federal control over the regions, the settlement in Chechnya — Putin has solved all these tasks.

Erdogan did the same: becoming Prime Minister in March 2003, he pursued a stable policy, as a result of which Turkey became one of the key leaders in the region.

Thirdly, both Erdogan and Putin have a hard, stern character. Undoubtedly, national and international politics left their mark on these leaders. In addition, both like to keep unresolved issues under personal control, and if members of the government do not perform the tasks set, then both Erdogan and Putin, without hesitation, dismiss the ministers.

The fourth point is the success of economic policy. Under Putin, foreign debt decreased, international foreign exchange reserves increased many times. Russia has again become one of the largest economies in the world. Thanks to a competent energy policy, a global brand such as Gazprom was born.

As for Mr. Erdogan, then with him Turkey showed record-breaking rates of economic growth. Now it is one of the 20 largest economies in the world.

Turkish investments in Russia, Russian investments in Turkey and the volume of bilateral trade have reached a level that can clearly demonstrate the success of Erdogan and Putin’s economic policy.

Fifth, both politicians have a passion for governing the state. By the way, there's nothing wrong with that, the journalist notes. It is here that the most obvious similarity between Erdogan and Putin appears.

Putin spent two terms in the Kremlin for four years, and then, in 2008, he became prime minister. Nevertheless, the author of the article believes that it is Putin, as Prime Minister, that Russia is obliged to recast the Constitution, which extended the presidential term from 4 to 6 years. In March, 2012, Putin was again elected president for a new, six-year, term. And if he is re-elected again in 2018, the Russian leader will occupy the seat in the Kremlin until 2024. The former record of comrade Brezhnev, who worked at the high post of the head of the USSR for as many 18 years, will be beaten.

But Erdogan, who has been premier-ministritt for almost 10 years, can no longer be a candidate for premiere from his party. However, he is going to change the Constitution - for the sake of the country's transition to a presidential system. If the constitutional amendment is carried out, Erdogan is likely to enter history and as president of the Republic of Turkey.

Sixth, the story of the “tandem” is characteristic both for Russia and for Turkey. If D. Medvedev received support from Putin, and then Putin received support from Medvedev, appointing Medvedev, in turn, Prime Minister, then R.T.T. Erdogan appointed Abdullah Gül to the presidency in 2007. And it is extremely unlikely, experts say, that Gul is now involved in the development of Turkish policy.

You can add here also that if Mr. Erdogan cherishes dreams about the revival of the Ottoman Empire, then Comrade Putin is seriously thinking about the Eurasian Union ...