Arms Record of American "Black Friday": Pistols and Shotguns against Obama, the UN, and Zombies

December 3 2012
58
Recently, the so-called “Black Friday” took place in the USA: the day of total sales of everything and everything, from television sets and juicers to firearms weapons. Here we will talk about this last one today.

The fact is that sales of weapons in “Black Friday - 2012” beat up record sales last year. Especially in demand were pistols. However, people bought a lot of other weapons. According to the FBI, 23 applications for gun deals were received from one-day stores on 154.873 in November, which is 20% more than the Black Friday of 2011 of the year (129.166 applications for verification). 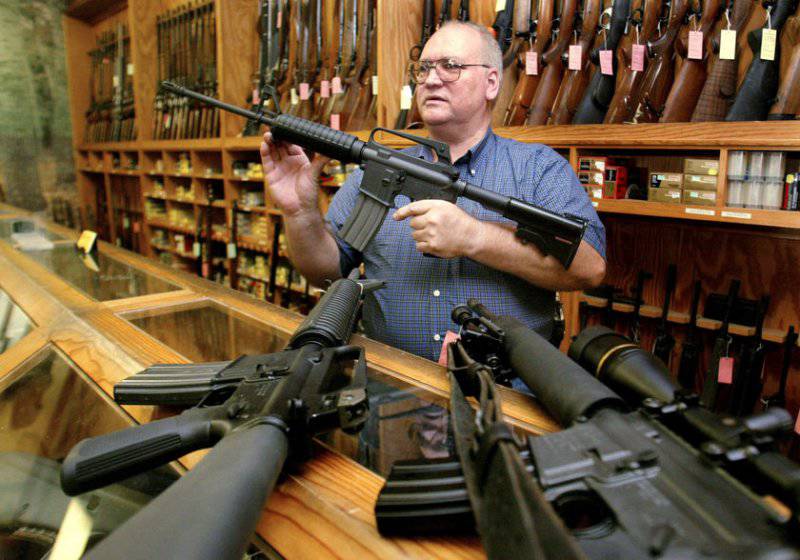 Shira Goodman of CeaseFirePa (Philadelphia), who opposes armed violence, says that, in her opinion, the massive decisions to buy pistols were caused by concerns about the possible application of tough American laws in 2013:

"There have been many reports that may promise the re-election of President Obama, although so far no action has been taken ..."

Mike Opelka, analyst at The Blaze, пишетthat the total amount of sales in physical stores (i.e., outside the Internet marketplaces) showed a slight decline compared with 2011 of the Black Friday of the year. Analytical company ShopperTrak stated that customers left 11,2 $ billion in physical stores on Black Friday, which is 1,8% less spending on the corresponding day last year.

However, the reduction did not affect one “very specific area of ​​the retail business,” the journalist writes, namely, the arms trade. According to the National Organization for Sports Shooting (NSSF), arms sales set a new record, showing an increase of 20%. The growth in sales of handguns was so great that many retailers reported an extension of the waiting time for processing applications to the FBI (checking the customer’s information to identify the criminal past). 154.873 applications are an indicator of only one day of sales (November 23). On the histogram shown below, you can clearly see a jump in the growth of arms sales on Black Friday - 2012. 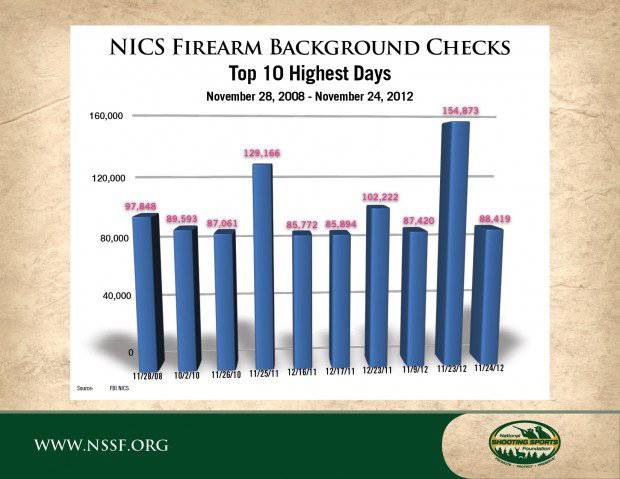 On Sunday night, Robert Barnett, owner of a gunsmith shop in Hunsville, Alabama, confirmed that the data verification process, which usually takes 2-3 minutes, took much more time on Friday: approximately 15-20 minutes. The fact is that the application to the National System of Instant Criminal Information Verification (The National Instant Criminal Background Check System, NICS) is given by phone. Barnett's 8-9 workers were processed by 4-5 applications at the same time, but simply could not get through: the number was busy.

According to Barnett, many times his staff tried to dial the NICS number, but all the time they heard "busy." This was due to the increased demand for weapons on Black Friday.

Jim Pryutt, owner of a gun shop in Texas, commented on the rise in demand as follows:

“Under Obama, the guns go just like hot cakes. Every time the president says something about weapons, sales of this very weapon instantly jump. ”

The Blaze journalist turned to the FBI to confirm the number of applications and checks. Stephen Fisher of the FBI Public Information Office provided the publication with the following accurate data on the verification of applications.

Perhaps, the journalist notes, Jim Pryutt is absolutely right in his assessment of the president’s abilities to inspire Americans to purchase firearms on a massive scale ...

"People always think that someone can restrict their rights to the same purchase of weapons - and therefore, it seems to me, they go to the stores just automatically."

In this store, sales growth compared with the previous “Black Friday” was 40%.

Analyst Chris Daniels know Exactly what stimulates Americans to buy weapons, in addition to discounts on Black Friday: women, fear of Obama’s edicts and ... the danger of a zombie invasion.

A woman with a rifle in her hands in an arms shop says:

“I’m afraid of invasion, but ... If something happens, I can protect myself, my children and my home."

Wade Gagran, a arms dealer from Bellevue, says people buy guns and other weapons because they are afraid of legislative changes. It is possible that Obama will try to impose restrictions on trade, and even a ban. People dismantle weapons, while nothing has changed.

Another Bellevue resident, Dave Walkman, believes that the increased zombie fashion has helped, among other things, to boost sales.

Columnist “USA Today” Kevin Johnson пишетthat the FBI does not track actual weapon sales. Therefore, the number of firearms sold on “Black Friday” is likely to be higher than the number of applications, since several items of firearms can be included in one purchase by one buyer.

Many dealers say that the continued growth in arms sales is explained by a number of factors, but primarily by an increase in the number of female buyers and fears that lawmakers in the second term of the Obama presidency may introduce stricter laws regarding the acquisition and carrying of weapons. They even talk about a possible attempt to renew the ban on military weapons.

Don Gallardo, the manager of a large store in Phoenix, says that this year sales of assault rifles, shotguns and long-barreled shotguns (the proportion of 62%) surpassed Friday sales of pistols.

In Austin Texas, a lot of women were seen in gun shops. Sellers explain this by the fact that women have recently been very much involved in shooting sports.

Paul Joseph Watson (Infowars.com) sees the reason for the sharp increase in demand for weapons in some of Obama's election promises.

During the presidential debate, Barack Obama spoke about a possible ban on the sale of military weapons. Opposition activists, the journalist writes, immediately saw this as the first step towards gun control.

Obama also noted that the policy of empowering people to keep and bear arms will also be updated. He talked about this last year in a meeting with attorney Sarah Brady. Then he assured Sarah that the control of firearms is on his agenda.

But this is only the “inner front” of the problem, PJ Watson believes. The Obama administration is ready to sign under the UN global arms trade deal, which may well prohibit the sale of weapons in the United States.

The final discussion of the International Arms Trade Treaty (ATT) will be held in March next year. In section III, Watson notes, it contains a provision according to which, if a member state cannot legally get rid of privately owned weapons, then customs, police and intelligence control, as well as general arms control in this country, will be organized under the auspices of Special Council acting under the authority of the UN Office for Disarmament Affairs. And this, Watson writes,

“It opens the doors to the UN peacekeeping forces, which will come to disarm American citizens.”

The mentioned agreement was not signed in July 2012 in New York: it was not supported by the United States, Russia and China - the leading manufacturers and exporters of weapons. But November 7 Took place vote for holding an ATT conference in March 2013. Representatives of the United States voted to hold the conference, although they still refuse to agree with the treaty-adoption mechanism itself. It is characteristic that three years ago the United States was almost the main opponent of the conclusion of the MTDO, and now they are losing ground.

Comrade Watson, mentioning the imminent disarmament of American citizens by the UN peacekeepers, is ironic about some of the American laws of recent years - especially the National Defense Authorization Act (NDAA), which will soon be extended to 2013 a year. According to this act, cases of domestic terrorist investigations and interrogations in the United States can be transferred without trial to the hands of the military. The law allows for the removal of due process and indefinite detention of any person. To detain you only need a government statement that such and such people are spies or terrorists. The very existence of such laws should lead the UN to the idea that the US population is massively inclined to terrorism, and the only way to calm it down is to completely disarm it. Against the background of the purchase by the US Department of Homeland Security 1,45 million cartridges (for five years), every little bit progressive American journalist makes it clear that the Obama administration prefers to suppress unarmed citizens, rather than “militants” who, after watching a movie about zombies, can a couple with their wives lie down with the "Saigas" on the barricades, successfully fighting off anti-constitutional police attacks.

Weapons, for example, would be very useful to Texas and Louisiana, which, under electronic petitions for the separation of states, had long since collected the necessary number of signatures. Not without reason Tom Head, the chief administrator of one Texas district, publicly, through the press, warned Obama about a possible civil war in case of re-election of the latter. This man made it clear that he needed to prepare himself for the “worst”, “civil unrest, civil disobedience” and even, probably, “war”. Tom Head, much earlier than journalist Watson, argued that a riot of Texans disgruntled with Obama would be suppressed by a UN peacekeeper. However, the brave Texan Mr. from Lubbock County is not going to let the military into his home state:

"... So, I will stand in front of their armored personnel carrier and say:" Boy, you have nothing to do here. "

Thus, Black Friday, which overloaded NICS, proved one thing: the Americans do not want to part with their weapons. They want to buy pistols, rifles and shotguns, and they want to buy a lot of them. And before the UN peacekeepers, on Obama's orders, start making one big federal gulag from the USA, they will have to deal with such strong guys as Texas Tom and his ardent supporters.