How long will the next war last? ("IRNA", Iran) 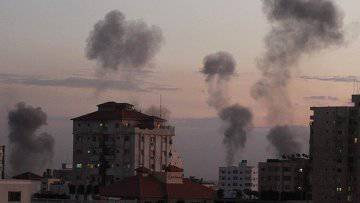 The war that the Zionist regime began with the Gaza Strip did not end as expected by the Israeli leadership. While the Iron Dome air defense system was advertised as a means of disarming Palestinian factions and eliminating the possibility of retaliatory strikes from them, the passage of Hamas and Islamic Jihad missiles exacerbated the position of this regime and confirmed assumptions about the latent power of Palestine.

On the eighth day of the war, the Zionist regime with Palestinian factions led by Hamas proclaimed a truce. He was told by Egyptian Foreign Minister Mohammed Kamel Amr during his joint conference with US Secretary of State Hillary Clinton. According to him, it was decided to declare a truce with 21 in November with 21: 00 Cairo time.

On November 14, after the killing of Ahmad al-Jafari, commander of Hamas’s military wing, as a result of an Israeli missile attack, a full-scale war broke out between the two sides, which lasted exactly eight days. As a result of this war, 160 Palestinians died.

Under the terms of the truce, Israel and Palestine should not launch missile strikes against each other. An agreement was also reached on opening corridors to the Gaza Strip and facilitating the passage of people and goods through them. It is important to note that this truce was achieved through the mediation of Egypt and personally the president of this country, Mohammed Mursi.

According to many researchers, the attack on the Gaza Strip was one of the major mistakes of Israeli Prime Minister Benjamin Netanyahu because, eight days after the outbreak of hostilities, Israel agreed to a truce with Hamas, but failed to achieve significant advantages in its confrontation with Palestinian factions. Moreover, the situation of Israel has deteriorated further.

Despite the fact that during the rocket attacks of the Zionist regime on the Gaza Strip, some of the Palestinian strongholds suffered, Hamas bravely resisted Israel, received help and moral support from various countries in the region, and even managed to penetrate the Iron Dome. In view of this, it can be concluded that it was Hamas that won the last war. The Zionist regime, which deprived the lives of many Palestinians, by contrast, was condemned by the public not only in the Middle East, but also in Western countries.

From a strategic and military point of view, Israel suffered a significant defeat in this war. In eight days of rocket attacks, hundreds of Palestinian rockets were fired from the Gaza Strip with a view to the objects of the occupied territories. Although the Israeli anti-missile defense system eliminated some of these missiles, especially the old ones, a significant part of them went through the Iron Dome and hit the designated targets. For the Zionist regime, which guaranteed the safety of its citizens, hitting Palestinian rockets means a serious defeat.

During the last war, one very important fact draws attention to itself. We are talking about the range of missiles fired from the Palestinian territory. For the first time, Hamasu was able to hit targets far from the border in Tel Aviv and around Jerusalem. Previously, Palestinian groups could attack only objects in the south and west of the occupied lands, while the central territories remained out of reach. However, during the last war, the situation changed in a fundamental way. For the Zionist regime, now devoid of strategic depth, the power of hostile groups in the border areas is a great danger to the very existence of Israel.

The non-use of ground operations by the Zionist tactic forces Hamas and Islamic Jihad to conceal their true potential. This fact does not allow Israeli intelligence to establish the exact number of Palestinian reserves, which makes subsequent wars even more dangerous and difficult.

The Zionist regime agreed to a truce after the explosion in a bus in the Israeli capital killed two people and injured at least ten. The important thing is that for the first time in six years, Palestinian groups have managed to blow up a mine in Tel Aviv. To this should be added the various statements about the inability of Israel to continue the war, so it is quite obvious that the Zionist leaders were forced to go to an armistice.

According to the testimony of BBC correspondent Paul Danahar, at the conference after the announcement of a truce on the expressions of the Prime Minister, Minister of Defense and Foreign Affairs of Israel, no one would have thought that they consider themselves winners.

Many believe that over the past six years, the Zionist regime in its struggle with the Palestinian factions has become weaker every day. If in the 2006 year, he 33 of the day fought with the Lebanese Hezbollah, in two years - 22 of the day with Hamas in the Gaza Strip, but he never managed to destroy it. This time, four years later, the Zionists again started the war with Hamas, but after eight they agreed to an armistice. It is appropriate to ask some questions. Does Israel learn from its mistakes? How many days will the next war go? What will be the result of wars?