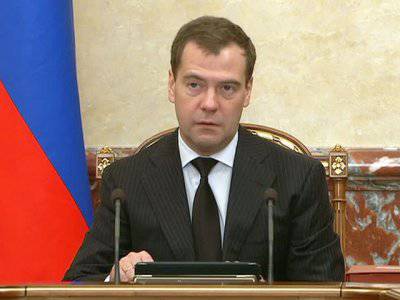 Russian Prime Minister Dmitry Medvedev considers the resignation of Anatoly Serdyukov to be correct, but, in his opinion, only the court can recognize the results of the inspection in the military department as a crime.
“The presence or absence of financial irregularities is a matter of evidence, which is now collected by law enforcement agencies in accordance with the Criminal Procedure Code. They have to do their job. And then prove it all in court,” the prime minister said in an interview with the Kommersant newspaper. According to him, "the president and the chairman of the government regularly report on what is happening in various departments." "For all such appeals, if it says about essential points, orders are given about checks. The inspection at the Ministry of Defense did not start today, but much earlier. Its results can be qualified as an offense or a crime only by a court sentence. And nothing else." stressed the head of the cabinet.

According to Medvedev, "there are rules of behavior in this situation that exist in any country." “If doubts have arisen with regard to this or that official, a case has been initiated - and this is a public matter - the manager must decide either to dismiss or dismiss the head of the department. At least so that there is no doubt about the objectivity of the investigation . So do in all countries ", - he explained the resignation of Serdyukov.

At the same time, the prime minister praised the ex-minister for his success in military reform. “You can do nothing, but you can carry out transformations. Anatoly Serdyukov spent them. With errors, probably, but I have no doubt that these reforms really began. They concerned both the armed forces themselves and the social well-being of the military. Of course, it is easy now to talk about shortcomings, but exactly in the last few years the social status of the serviceman has changed completely. The salary and money allowance has become fundamentally different, the outflow of people from the armed forces has stopped. , they got and they get apartments. This has never happened. And if we talk about salary, you know, although a person cannot be completely satisfied with his salary, but now it is absolutely comparable to the corresponding pay for soldiers in Europe. And it’s not so much different from that the same amount of money in the United States. This is the result of the transformations that were carried out in the Ministry of Defense, "Medvedev stressed. He hopes that the new Minister of Defense Sergei Shoigu will continue this course.

The head of government, among other things, also spoke out against the idea of ​​uniting Moscow and the Moscow Region into one subject. “This question needs to be asked not only to me. First of all, to the people themselves. But if you ask my opinion, I’ll just say: this is too much for our state,” he said. “20 million the person (Moscow and the region) is the seventh part of the country. I think it is difficult to manage. Though there will probably be similar ideas. "

“In my opinion, if we talk about unification, then, for example, the unification of St. Petersburg and the region is a much more realistic task,” Medvedev believes. “Because there are fewer people (no more than seven million) there. Such subjects already exist. That Moscow region. They can be controlled. Although in legal, administrative and even humanitarian terms it is very difficult. Size matters. "

Meanwhile, the project of creating an administrative complex on the territory of Greater Moscow, according to the prime minister, is not closed. “Contrary to popular opinion, now the project is not closed; all instructions have been given and are being worked out,” he said. “If we talk about the government, about the parliament, about the presidential offices, they can potentially be transported to New Moscow, but this is a technologically very difficult task,” the prime minister admitted, adding that “of course, you need to calculate how much it will cost.”

At the same time, Medvedev stressed that, as president, he decided to expand the territory of the capital not because of the officials. "The city is choking; 12 millions (people), and frankly speaking, all 15 millions, with visitors, cannot live within 60's boundaries," he is convinced. "And this is not a whim, but a thoughtful decision," the head of government explained.

“I am sure that in the coming years we will witness a sufficiently rapid development of new territories,” Medvedev said, ITAR-TASS.