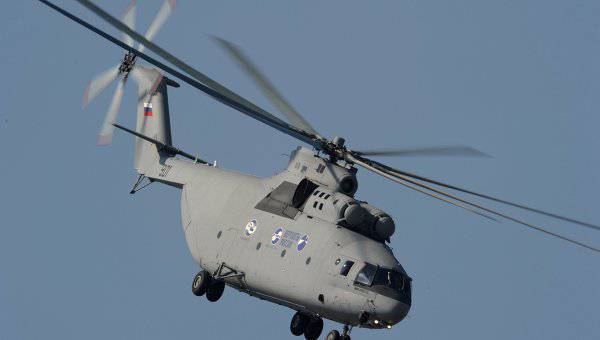 RIA News. On Wednesday, Rosoboronexport denied media reports about the loss of Russia in tenders for the supply of Indian air forces to heavy transport helicopters and tanker trucks in which Russia participates with the Mi-26Т2 helicopter and the Il-78МК-90 aircraft.

Earlier, some Indian and Russian media reported that the American Chinook helicopter won the tender for the supply of heavy cargo helicopters to the Indian Air Force, ahead of the Russian competitor Mi-26. As noted in the publications, the Americans offer their helicopters at a lower price, and therefore, indicated the media, the Indian side decided to choose Chinook. Later, there were reports that the winner in the tender for the supply of aircraft-tankers to the Indian Air Force was the A-330 vehicle manufactured by the European group Airbus, which allegedly outpaced the Russian Il-78 aircraft.

"Rosoboronexport denies media reports about the loss of Russia in these tenders and reports that these publications do not correspond to reality. To date, the results of both competitions have not been announced, and any premature statements mislead the public and the professional community, as in Russia, and in India, "- said in a statement.

The release emphasizes that the heavy transport helicopter Mi-26Т2 and the Il-78MK-90 tanker aircraft deserve to win in both tenders, since they "are not only unique military vehicles, but also fully comply with the technical requirements of the Indian side, including high performance by the criterion of "efficiency - cost."

Rosoboronexport OJSC is the only state organization in the Russian Federation for the export of the entire spectrum of defense, dual-use products and services, and is part of the Rostekhnologii corporation. The holding is one of the leading companies in the global arms market. It accounts for more than 80% of exports of Russian weapons and military equipment. The geography of military-technical cooperation of Russia is more than 70 countries of the world. Rosoboronexport cooperates with more than 700 enterprises and organizations of the military-industrial complex of Russia.
Military Reviewin Yandex News
Military Reviewin Yandex Zen
38 comments
Ad