November 29, 2012
23
M-17 "Stratosphere" (according to NATO classification: Mystic-A) is a Soviet high-altitude aircraft designed to combat drifting balloons. The plane was subsonic. For the first time, a supercritical high-carrying wing profile was created for this aircraft, which was designated as П-173-9. The development of the M-17 aircraft began in the 1970 year. By 1978, the first flight model of the new machine was created at the helicopter plant in the city of Kumertau, which, unfortunately, crashed while running. The second flight model was created only in 1982 year, this time the aircraft was assembled at the Smolensk aircraft factory. 26 May 1982, test pilot E. V. Cheltsov first raised the high-altitude subsonic plane into the air, the flight was carried out from the airfield in Zhukovsky. In the spring of 1990, this machine immediately set the 25 world records for speed, altitude, and rate of climb for airplanes with a mass of 16-20 tons, equipped with a single turbojet engine. At the same time, the last sample of the M-1990 aircraft was assembled by 17.

After the U-1960 high-altitude American reconnaissance U-2 under Powers was shot down in May 0 near Sverdlovsk, the United States decided to revise the aerial reconnaissance strategy over the territory of the USSR. By the time the CIA armed itself, a new means of delivering reconnaissance equipment to the airspace of the Soviet Union appeared - automatic drifting balloons that were launched from the territory of some NATO countries. These balloons used the winds that dominate at high altitudes over the territory of our country and could cross the USSR from west to east. Such balloons were controlled by radio and could, on command from the ground, change the altitude almost from 45 to 50-XNUMX km. At the same time, the balloons could carry not only "innocuous" reconnaissance equipment, but also a fairly wide range of explosives that could have been dropped from the ground by a team.

The air defense of the USSR was forced to use earth-air or air-to-air missiles to destroy these uninvited guests. At the same time, the cost of destroying an aerostat made of cheap dacron or maylar film was tens of times greater than the cost of this drifting balloon. Moreover, the preparation of balloons for flight and the deployment of technical means did not require much time from NATO, so their mass launch put the defense of the USSR at risk. 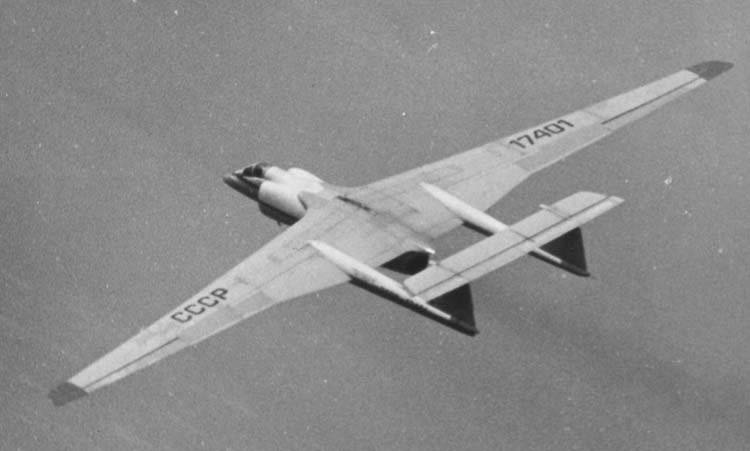 Taking this into account, in 1967 a decree of the Council of Ministers of the USSR and the Central Committee of the CPSU was issued, according to which the Experimental Engineering Plant (EMZ), located in Zhukovsky near Moscow and headed by V.M. Myasishchev, was ordered to carry out a set of scientific research works (R&D) “The choice of technical directions for creating an aviation complex for intercepting and hitting automatic drifting balloons”. The deputy chief designer G. I. Arkhangelsky was assigned to lead this topic at the EMZ. Within the framework of this project, a very large amount of work was carried out; head institutes were connected to the solution of the problem aviation industries, concerned departments and ministries. As a result of a comprehensive technical and economic analysis, the creation of a subsonic high-altitude fighter aircraft equipped with small-arms weapons was recognized as the best solution.

In 1970, work on the USSR Air Defense System began work on the subject No. 17, which assumed the creation of a high-altitude fighter aircraft. VM Morkovkin became the lead designer of the project. By that time, the OKB had already studied in detail the wreckage of the U-2 high-altitude reconnaissance downed near Sverdlovsk, and quite plump volumes of the comparative characteristics of the units and systems of this aircraft with Soviet counterparts were compiled. At the same time, Soviet engineers won over the simplicity and simplicity of the design of the American aircraft and its systems. The results obtained during the study of the wreckage of U-2 showed that the creation of a domestic high-altitude interceptor based on Soviet science and technology is a rather painstaking and lengthy work that will require the search for new solutions.

A decisive influence on the future appearance of the car then had a choice of power plant. Out of all the diversity of the schemes under consideration, only 2-e were ultimately left: with two D-30 two-circuit engines P.O. Solovyov’s 6,6 tons, which were suspended in nacelles on the lower wing surface and with a single RD-36-51A engine of design P A. Kolesova, with take-off in 18 tons, which was located in the fuselage of the machine. In the course of the tests, it was found that at altitudes above 11 kilometers the drop in thrust turned out to be large for the dual-circuit D-30. In addition, the desire to have an aerodynamically clean wing and the need to accommodate a large amount of fuel also tipped the scales to a single engine located in the fuselage. 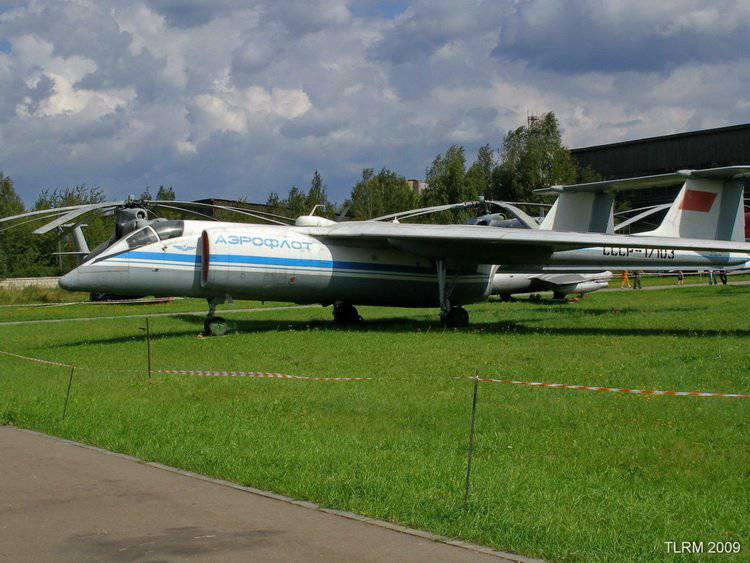 In addition, the RD-144-36А engine, developed for a supersonic Tu-51, had a separate gear box for aircraft units, which greatly facilitated the layout of the entire power plant, and also made it possible to reduce the midsection of the fuselage. All this ultimately led to the final choice of a single-engine option. At the same time, the look of the American U-2, which was an airplane of a traditional scheme with an engine equipped with a large extension pipe, did not become due to inexpediency. It was decided to stay on the two-beam scheme.

In 1971, the aircraft under development received the official designation M-17 "Stratosphere". In the technical project for this project, a condition was set for achieving a height of locking in 23-25 km., As well as ensuring its piloting by ordinary combatant pilots. To achieve the required aerodynamic characteristics for the new aircraft, first of all it was necessary to develop a wing with unique bearing properties. The result of these works was the wing of the original dual-mode design, which in flight could change its area and shape (due to the extension in flight of the tail section of the profile). A copyright patent was obtained for this wing.

In parallel with the solution of aviation problems, a simple enumeration of which would take several pages of text (design, cockpit ergonomics, configuration and area of ​​the HE, location of the main landing gear, etc.), work was carried out to create a search and aiming station to detect balloons and targeting weapons system. Due to the very low radar visibility of reconnaissance balloons, it was decided to use an active optical search and target tracking system. The system included a survey direction finder, which was to find a target, a tracking direction finder and a laser range finder, which was then called a quantum finder. This system was supposed to accompany the target in flight and control the fire of a rapid-fire gun in automatic mode with the possibility of making adjustments. 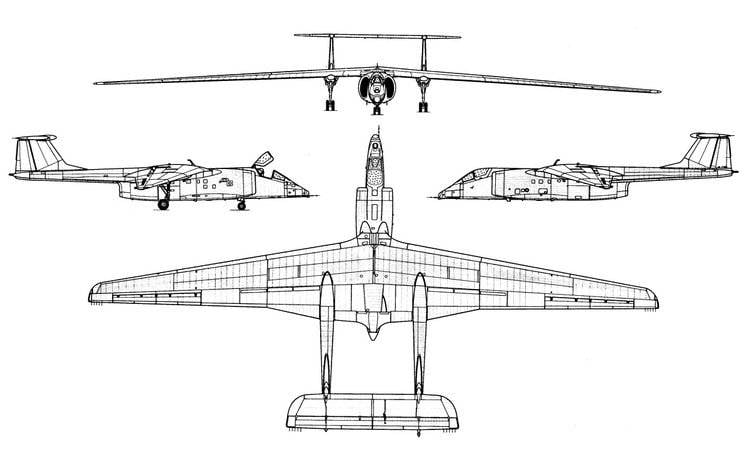 This system was successfully created in the Geophysics Central Design Bureau, the designer D. M. Khorol supervised the work. The system developed by him in the future proved to be from the best side, since the indicators given by the terms of reference were significantly exceeded. The requirements for the optical characteristics of the system being created were so high and serious that, for example, the windshield of the range finder had to be made from Brazilian mountain crystal. In the USSR, they simply could not find a mineral with such a small number of impurities and impurities.

For the destruction of reconnaissance balloons, the PUF was chosen - a mobile cannon set up created by the Dzerzhinets station on the basis of the well-proven 23-mm rapid-fire gun GSH-23L, which had a rate of 3400 shots per minute. At the same time she weighed only 47 kg. In addition, the designers had to develop a highly sensitive fuse that would have been triggered by hitting a very thin aerostat shell, which was another important step towards the destruction of aerostats with 23-mm projectiles.

The accompanying physical effect unexpectedly helped the Soviet designers in this. During damage to the shell of the balloon fragments of the projectile formed only small holes, the gas flow through which was not sufficient to reduce the balloon. However, to the delight of the Soviet designers, a reactive moment appeared, twisting the envelope of the balloon relative to its more inertial suspension. The feet holding this suspension squeezed the envelope, and the gas from the balloon was squeezed out with increasing intensity. In addition to this, special explosive shells were created, which at the moment of operation scattered wire flagella, which significantly increased the area and size of the holes. 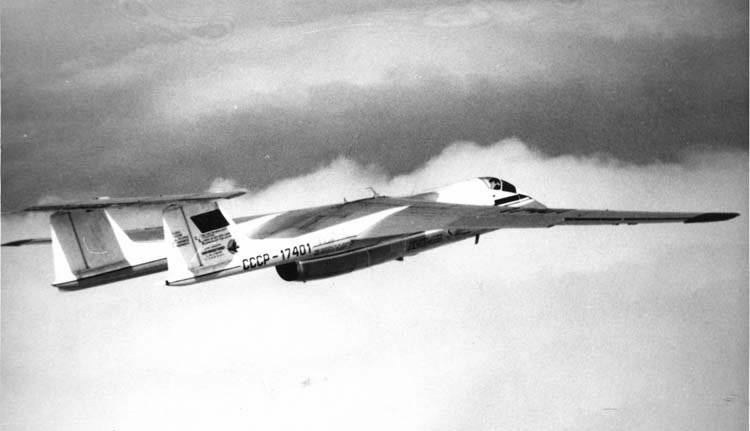 In terms of its layout, the Stratosphere M-17 was a double-beam apparatus, having a short fuselage and a “clean” wing of a sufficiently large span - 40 meters. It is worth noting that the M-17 re-opened the scheme for modern jet aircraft. At the same time, it is worth noting the fact that at all times the myaschevites favorably differed from the designers of most other design bureaus by their special attitude to the decisions of rivals and colleagues. That is what allowed, ultimately, to develop an aircraft with very good flight characteristics.

Specialists noted a unique profile, as well as wing mechanization of the Stratosphere. Here a completely new supercritical wing profile was applied, which allowed the aircraft to have an increased aerodynamic quality in almost the entire range of altitudes and speeds of flight. The wing of the M-17 was later even called adaptive, which was the result of its variable profile geometry (not to be confused with the variable sweep of the wing). In addition, to improve the aerodynamic characteristics of the machine was due to the original wing tip. The fact that M-17 could plan from a height of 1 km indicates the high flight capabilities of the car. at a distance of 30 km.

Unfortunately, the unique aircraft became hostage to the changed situation. Work on its creation was delayed, while the Americans launched their last balloon in November 1983, from the territory of Norway. In the future, the United States simply stopped using these intelligence assets against the USSR. However, the developments on M-17 were not in vain and became the basis for creating a civilian version of the M-55 “Geophysics” aircraft.

Tactical and technical characteristics of the M-17: