The UN General Assembly adopted a resolution condemning the glorification of Nazism, the United States and Canada voted "against"

November 29, 2012
185
After voting in the framework of the UN General Assembly on a resolution condemning the glorification of Nazism in all its manifestations, it turned out that our world cannot even agree here.

The draft resolution was prepared by the Russian delegation in collaboration with the delegations of the 42 states of the world. The document contains concern that in some European countries, which are well known to everyone and clearly do not need an additional view, continues to be expressed not only the strange support of SS veterans marching along the streets of European cities, but also a clear detriment to the rights of those who in their time at the cost of his health or life he fought in defense of the world against the Nazi plague. The resolution condemns the erection of monuments to Nazi criminals. 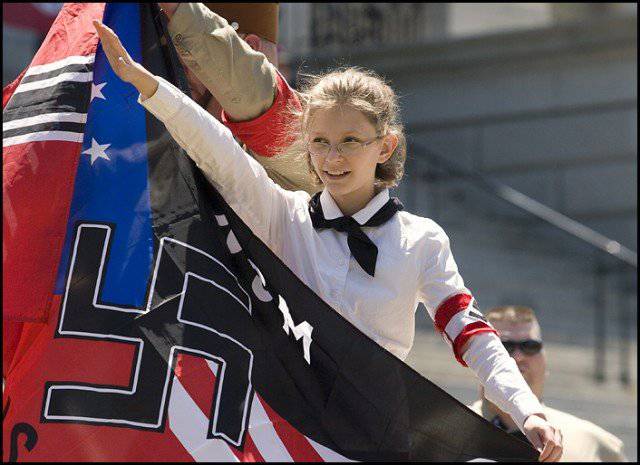 Obviously, this also concerns the monument erected in the Latvian town of Bauska to the Latvian battalions of the Waffen-SS (No. 23, 319, 322). Recall that with the active support of the authorities of Bauska in September 2012, this monument was presented to the general public. The monument itself, as the inscription in Latvian says, is dedicated to the events of 1944, when young Latvians joined the fascist German units in order to resist the “second Soviet occupation”.

The General Assembly resolution condemns the desecration of monuments to the fighters against the Nazi threat, which in the 30-40-s of the last century hung over the planet.

All the points of condemnation would seem obvious, and therefore one would think that the states participating in the meeting of the United Nations General Assembly would unanimously support the resolution. However, in fact, everything turned out much more complicated than one might have supposed.

Although the resolution was adopted, it was not at all unanimous. It turned out that, at a minimum, the 60 states that had the right to express their position on this issue have an opinion that differs from that of other countries that condemn the glorification of Nazism. Of these 120 states, three countries voted against the resolution, which caused obvious bewilderment not only for those who developed this resolution, but also for those for whom the word “Nazism” itself is associated with tragic history. Opponents of the adoption of the anti-Nazi resolution were such states as the Marshall Islands, Canada and the United States of America. We will not go into the details of the position of representatives of the Marshall Islands, especially since this state with the 60-thousand population is associated with the United States, and turn to the position of other voters who voted against.

But a strange situation turns out: American representatives literally at all corners are trumpeting that it is the United States that is the main state of the world that won the Second World War, but now, as it turns out, the “winners” see nothing reprehensible about what they fought against in 40 years of the last century. However, in order not to open up such a controversial position, the Americans and their northern Canadian neighbors, faithful to the bone, decided to veil their position with old tales about human rights and freedom of speech. According to representatives of these North American delegations, the condemnation of the glorification of Nazism in the modern world somehow undermines freedom of speech. It turns out that in the United States and Canada are ready to provide platforms for those who advocate ideas of racial and religious intolerance, based on the election of representatives of a single nationality. If this is the observance of human rights, then what about the rights of those people against whom aggressive Nazi attacks are directed.

Hiding behind the apparently contrived ideas about freedom of speech, Washington and Ottawa, in fact, embroil the memory of the millions of victims of fascism (Nazism) during the Second World War. And if we consider that both veterans of that war live in both the USA and Canada, the authorities of these countries spit on the merits of these people. If freedom of speech, in the opinion of the American and Canadian delegations to the UNGA, is such that it is possible without shame of conscience to declare one’s involvement in Nazi crimes and worship monuments to Nazi punishers, then it becomes clear where these states may eventually slip.

It is obvious that a vote on the resolution by the listed states, and first of all the USA, is a clearly thought out action. After all, it is no secret that in Washington the effect of a stimulus is not at all the text of the resolution, but the fact that this resolution was initiated by Russia. And in this case, everything works according to a stable operating scenario, which has remained unchanged since the fierce Cold War: “If the Russians offered, then we (the Americans) will be against it.” Or, as in the famous phrase of the Soviet times, “I did not read, but I condemn ...”

Obviously, if Washington were in favor of a resolution, it would offend its main Eastern European satellites - the Baltic states, the entire existence of whose “independent” authorities are based on the continuous declaration of Russophobia. The more words and actions that somehow affect the honor and dignity of Russia, the more praise from overseas from the "Big Brother".

In other words, voting “against” the provisions of the resolution condemning the glorification of Nazism for the United States is a litmus test, which once again demonstrates that this state still cannot depart from the stereotype of hostility on the part of Russia. It is like an invisible source of control over the electorate, when the presence of an enemy spurs certain actions. And what could be better than the support of the United States from the opponents of Russia, who feed themselves on opposing themselves to those who for decades have been regularly developing these territories, famous for their, forgive, “rotten” kind.

In general, the American "against" is a symbol of stereotypes that are not cured by time, according to which the Cold War is not over yet ... By the way, this is not the first vote on this issue, in which the US speaks accordingly. And could the USA and Canada support the resolution when Nazism lives and flourishes in their territories to this day.

According to the 2010 census, more than 3 millions of Indians live in these North American countries. At the same time, up to a million Indians are forced to live on the territory of special zones - reservations (peculiar ghettos). If on average in the USA the poverty line is up to 12% of the population, then this indicator among the Indians is higher by more than 2 times - 25%. In this case, the Indian family is not easy to leave the reservation, even if she (the family) wants it. And if we take into account that in some reservations, the unemployment rate is simply infinite (above 80%), then this state of affairs can’t be called a violation of the rights and freedoms of these people on an ethnic basis. As one American political scientist called the Indians, “strangers in their own country.” So where, then, are human rights, freedom of speech, thought, movement, and other democratic pillars? ..

However, if the Americans, Canadians, and “Marshall Islanders” expressed their explicit views, then the UN 57 states decided not to say yes or no. Like, we seem to be in favor, but at the same time we look back at those who stand behind us. And for those who are behind, they were discussed above. And this speech is not about the Marshall Islands ...

On the one hand, it is surprising, but on the other - the position of the Ukrainian delegation, which has decided to abstain from voting, falls into a common outline. You can think for a long time on how the state, on whose territory during the times of the Great Patriotic War the people endured the hardest trials, faced with the fascist plague, did not support the resolution. One can discuss for a long time the question of how the delegation of a country that survived Babi Yar and the extermination of the indigenous population set by the ideologues of Nazism could shy away from a direct answer.

But all thoughts and discussions will be superfluous, since today the official authorities in Kiev, it seems, cannot decide for itself which way to continue leading the country. Nationalist attacks in the West, the pro-Russian East and South, the Center declaring European integration ... the dashing president, the parliament in constant political fever ... Forwards, backwards, to the right, then to the left, then to the head in the sand - in general, the vote " "- the choice of the modern Ukrainian government, which obviously does not cause respect. Yes, and vote the delegation of Ukraine "in favor", the authorities would have to suppress the activity of the ultra-right in the western regions, and the central authorities clearly do not have the power and authority to be able to solve such serious problems. As a result, Kiev and had to sign in their helplessness ...

The European Union states, as well as Moldova, Georgia and some other states fell into the same group of “doubters”.

Well, here, too, everything is clear. Brussels could not vote against its “chicks”, which so far are reliably covered by its wing, and therefore have the opportunity to install the monuments of the SS men, to sprinkle sand on the streets during marches of Nazi battalions veterans ... And Georgia and Moldova are aimed at European integration, and therefore they voted the same as "European brothers".

It is encouraging that the overwhelming majority of the countries of the world supported the resolution, which speaks of an adequate global assessment of the crimes of Nazism, which cannot be hidden either by fables about freedom of speech, by the principles of tolerance, or by other contrived screens.