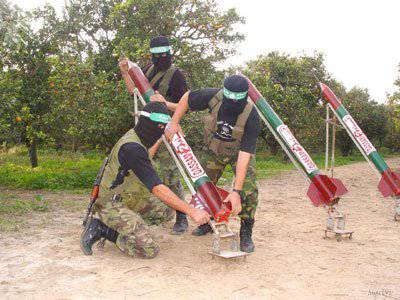 In just seven days of Operation Cloud Pillar, the military aviation Israel made about one and a half thousand sorties. As a result of air strikes, according to official Israeli information, more than two hundred supply tunnels, several hundred firing positions from which unguided missiles were launched, and 26 arsenals were destroyed. According to Israeli intelligence, the latter were used for storage and assembly. weaponsincluding unguided rockets. Thus, as a result of the Israeli Air Force operation, the combat potential of Hamas organizations, KNS, PID, etc., was significantly undermined. The destruction of military facilities was the reason for the clear response of the leadership of Arab organizations. For example, one of the high-ranking figures of the Hamas movement, Mahmoud al-Zahar, recently stated that his allies have no other way out than to import weapons from third countries with which they have good relations.

These words can be interpreted at once in several ways. First, the desire to bring new missiles into Gaza at any cost speaks of the success of Israeli aviation: it turns out that it really managed to destroy almost all of the main Arab missile production and storage facilities. Secondly, the al-Zahara’s statement may hint at the fact that the anti-Israeli “coalition” is not going to give up and intends to, once again gathering its strength, to strike back. However, in view of the almost complete lack of domestic production, the armed forces of Gaza will now have to be content with imported weapons. Most likely, deliveries will be made from Iran, which Az-Zahar hinted at transparently.

Starting in the 2001 year, the main missile weapons of militants from Gaza are unguided rockets of the Qassam family. These munitions are as simplified as possible and can be manufactured in almost any conditions. The basis of "Kassam" is a suitable pipe, such as plumbing, to which sheet metal stabilizers are welded. Inside is placed a simple warhead consisting of the most common TNT stubs, as well as a solid propellant rocket engine. The latter is a pipe with a mixture of sugar and potassium nitrate, sealed on one side. The simplest rocket can fly at a distance of at least three kilometers. At the same time, the starting accuracy is at least low. Due to the lack of a normal stabilization system and accurate calculations when hovering the launch of such missiles is always carried out, as they say, in that direction. However, due to the lack of serious industrial enterprises in Gaza, even such ersatz rockets do not look absolutely useless, as evidenced by the events of recent years, when the number of attacks increased every year, and new versions of Qassams with longer range. 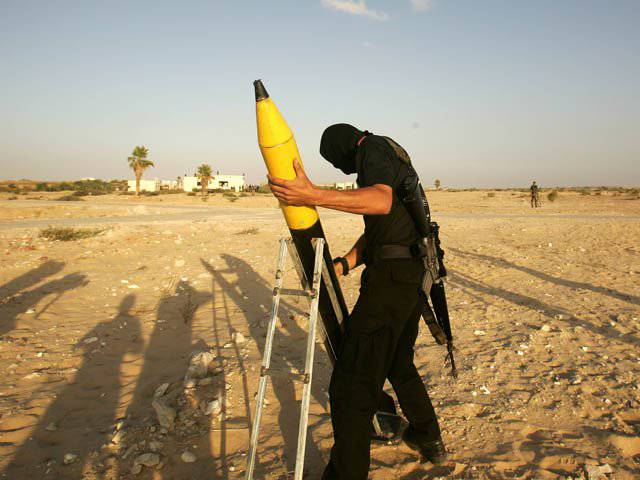 However, the range of 16 kilometers is still insufficient to attack most of the major cities of Israel. Because of this, the Gaza militarized organizations had to go to purchase ammunition abroad. So, it is reported that in the course of recent events from the Gaza Strip, a number of Iran-made Fajr-3 and Fajr-5 missiles were launched. With a range of at least 40 kilometers (“Fajr-3”), these unguided missiles can already present a certain danger to the Israeli side. In addition, Iran delivered Hamas or KNS Fajr-5 missiles capable of flying 70-75 kilometers. With the help of such ammunition, in the course of the recent battles from the territory of Gaza, the Tel Aviv environs were fired. However, fortunately for Israel, the number of such launches was small, because the supply of arms from Iran to Gaza is very difficult for a number of reasons. Because of them, the Islamic Republic and the Arab formations have to look for alternative ways, almost always quite long ones.

Not so long ago, the Israeli special services managed to establish an approximate route for the supply of Iranian missiles to Gaza. Of course, so far no one has been caught by the hand, but it is already clear exactly where to catch. From the factories of the Iranian state corporation, Defense Industries Organization, sealed closures of rockets dismantled arrive at the port of Bandar Abbas, where they are loaded onto merchant ships. From there, rockets are shipped by sea to transshipment bases in Sudan. The next link in the transfer chain is the Bedouin smugglers who send caravans of disassembled missiles to the Sinai Peninsula. From the territory of Egypt, dismantled missiles for smuggled underground tunnels are sent to Gaza, where they are assembled and prepared for use. There is information about the presence in Gaza of representatives of the Iranian Islamic Revolutionary Guard Corps (IRGC), who provide direct support for the assembly and use of smuggled missiles.

Official Tehran does not agree with the conclusions of the Israeli special services and claims that it only shares technological documentation with Gaza. In principle, such statements do not look very tight and implausible. At the same time, we should not forget that because of all the events of the last decades, serious industry did not appear in the Gaza Strip, capable of mastering the mass production of something more serious than the handicraft Qassamy. Therefore, there is every reason to suspect Iran of supplying ready-made unguided missiles. Meanwhile, Israel has accused Tehran of another attempt to smuggle its military experts to Gaza. Moreover, according to Israeli data, three representatives of the IRGC drove into Gaza during the truce.

If Iran’s participation in recent events receives solid and undeniable evidence, then Israel can get a good argument in favor of its position in Middle Eastern disputes. In addition, the participation of Iran in the so-called destabilization of the situation in the region may adversely affect the future actions of third countries against this country. Finally, Israel can take it as a kind of carte blanche and start preparing a new strike on Iranian objects, as it was several years ago. In general, launches of the simplest unguided missiles can entail a huge number of military and political consequences, including a new war.