November 28, 2012
28
If you take a separate tenacious branch of a single family weapons and follow its development, one way or another, one can observe at least some progress, otherwise it would not be called development. Recently, however, looking at the designs of some "promising" samples, it is difficult to say that the weapon is developing. Most often, nothing really new and at the same time worth the money that was spent on development, does not appear, but there are exceptions. In this article we will try to figure out whether the French “promising rifle complex”, which should have been completed already this year, is such an exception, namely, the ROPP automatic grenade launcher complex will be discussed. 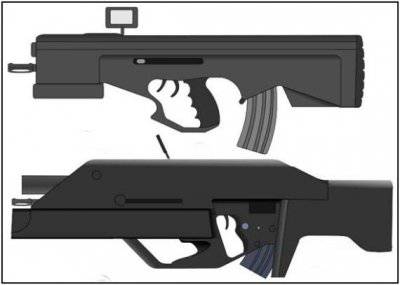 Immediately it should be noted that the scanty amount of information on these weapons, in contrast to similar developments of the same US, but, nevertheless, managed to dig up something. First of all it should be noted that several companies were working on this project, including the Belgian FN, which was developing the rifle unit of weapons, the grenade launcher was developed by Euroimpact, the shots for him are already the result of Lacroix's work. In addition, the not-so-unknown firms were also engaged in the electronic part of weapons, so the result should be really impressive, although it all depends on how well-coordinated the work of the companies is, so not always a plus can give a plus.

To begin the description of this unit is, probably, with its appearance. And the appearance of the weapon was allegedly copied from the weapon of the main characters of fantastic action movies. However, “20 000 lie under water” was once a very, very fantastic piece, but now you will surprise few people with a submarine. It is noteworthy that in one of the variants of this complex there is no pistol grip in its usual sense, instead there is an emphasis for the holding hand, which runs parallel to the weapon shop. This immediately casts doubt on the ease of handling and the reliability of holding this sample, moreover, left-handers will obviously not be happy with such “ergonomics”, not to mention those who will have to fire on the left side of the shelter, almost completely facing the enemy . However, judging by the photos, this emphasis can be presented to the other side of the weapon, which at least partially solves the problem. It is also possible that this disgrace in general will not be the result, since there are samples already in the layout of the bullpup, which, in this case, seems just perfect in its convenience. In general, the design of this sample is very cumbersome and, despite the widespread use of polymers and light alloys, it is not just an impression, but a reality, since the weight of the complex without ammunition is 7 kilograms. 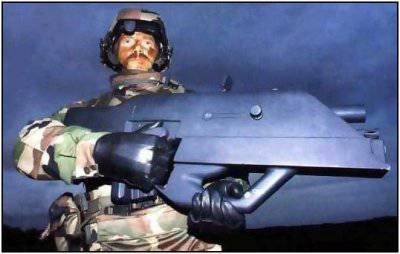 The grenade launcher part of the sample is a peculiar analogue of the American system, where the grenade launcher shots themselves are programmed according to the time of detonation depending on the distance to the target. However, unlike the not very effective, but quite expensive 25 millimeter shots of American origin, the French use 35 caliber shots of millimeters. Thus, the laser rangefinder measures the distance to the target, and the computer sets the time depending on the weight of the ammunition, after which it will be at the measured distance. Thus, the grenade itself does not explode when it hits the target and not after a fixed period of time, but strictly on approaching the target, while still in the air, which significantly increases the effectiveness of the ammunition. Well, unlike the American 25 caliber millimeter shots, the effectiveness of the French is clearly higher and the cost of the ammunition itself justifies the result of their use. By itself, a three-shot grenade launcher, with a horizontal arrangement of shots, which most likely was overseen by Australians, however, they have a grenade designed for 40 caliber millimeters, but this is no longer important, since the Australian complex has been developed for many years, and here already talking about the completion of work and adoption. So to say, who first got up, that and sneakers. 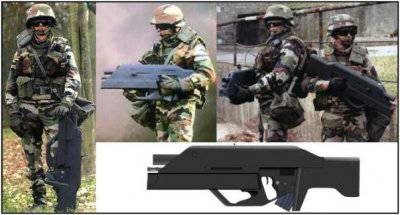 The automatic part of this complex is not as simple as in other models of weapons. So, if in other countries similar devices are based on some particularly successful model, the new model of weapons was based on a new weapon that is not used separately from the complex itself, which seems to be done to reduce the weight of the weapon. However, many sources claim that the basis was FAMAS, which is hard to believe. It is also interesting that the standard ammunition for the rifle part of the complex is not just a cartridge of the standard, you need an 5,56 caliber, but a cartridge with a sabot bullet. But, unfortunately, even the real diameter of the bullet of this ammunition is unknown. On the other hand, it is difficult to call it something supernova inherent in this particular sample, since such ammunition can be used in absolutely any weapon chambered for the NATO standard. Naturally, the converse is also true, namely, that PAPOP can use simple 5,56x45. 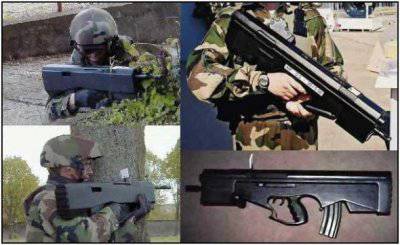 As it turned out, the French were one of those who were the first to heed the voice of reason and completely transferred all aiming devices to electronics, which helps the shooter to control the weapon through separate points. It is difficult to say here and so on the move, plus it or minus. But in general, if a person spends quite a lot of time training with a similar system, the effectiveness of the fire will increase many times, especially under the condition that the shooter himself may not even turn his head towards the goal, and completely hide behind cover. However, such a system also has negative aspects, since in the event of its failure, the weapon turns into useless trash in the absence of the simplest open sighting devices. And although the entire front sight with this design of the device will be quite inconvenient to use, but it is better than nothing. Let us recall one of the “national” phrases: “If you want to live still and you will not so much raskoryachish.

Separately, it is worth noting that in many sources two samples of weapons are divided into the early and the present. This is not entirely true, since both weapon models are developed in parallel, fundamentally do not stand out by their design, but have differences in ergonomics, weight and quantity of ammunition, and which will be more successful, time will tell, although the sample in the bullpup layout is ahead. So we are waiting for the official detailed report on this sample, or, more precisely, on two samples.