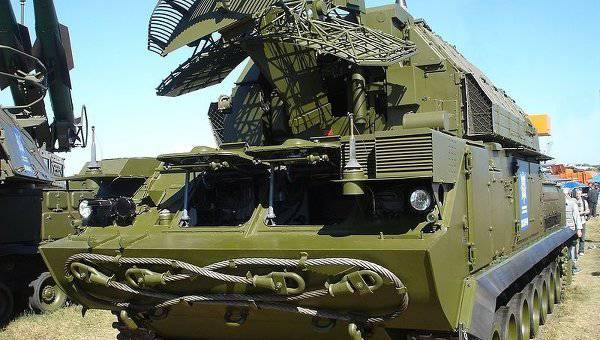 According to him, the new Tor-M1-2U air defense systems have entered service as part of the state defense order. The system will replace the short-range Osa, Thor and Tor-M1 short-range anti-aircraft missile systems in service.

The TOR-M1-2U air defense missile system is intended for hitting airplanes, helicopters, aerodynamic unmanned aerial vehicles, guided missiles and other high-precision weaponsflying at medium, low and extremely low altitudes. The system is capable of hitting four targets simultaneously at altitudes up to 10 kilometers. Her crew consists of three people.

“As part of the complex, an onboard station for detecting small-sized air targets was used, which allows detecting and tracking up to several dozen air targets in an area over 30 kilometers. In addition, the electronic equipment of the new air defense system allows you to select targets according to the level of danger,“ prompting ”to the combat crew the order of their shelling ", - said Kochetkov.

The TOR-M1-2U air defense system is capable of providing air defense of subunits and cover objects day and night, in any meteorological conditions, in addition, the system has a high noise immunity.
Ctrl Enter
Noticed oshЫbku Highlight text and press. Ctrl + Enter
We are
Innovation Day of the Southern Military District: the Uran-6 robotic complexInnovation Day of the Southern Military District: Pictures from the Exhibition
Military Reviewin Yandex News
Military Reviewin Google News
22 comments
Information
Dear reader, to leave comments on the publication, you must sign in.