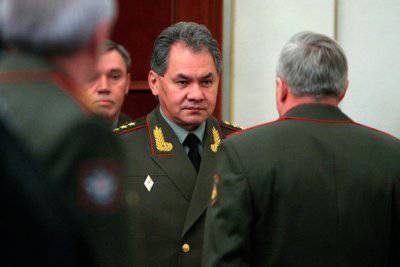 The change of the Minister of Defense of Russia was seen only as the salvation of the State Defense Order, which over the years of its work could not be realized by Anatoly Serdyukov. It seemed that it was necessary only to give him a strong business assistant, or to replace him with the economic manager himself, as the situation would get off the ground. However, what seems at first glance is not always true. Here and in the case of the State Defense Order, the reality turned out to be much more complicated than the change of responsible persons.

Many remember the appointment of Dmitry Rogozin at the end of last year as Deputy Prime Minister of the Russian Federation, who was called to supervise the military-industrial sector and, in close contact with the Ministry of Defense and Russian industrialists, to bring both companies to the conclusion of breakthrough production and supply contracts military equipment to the troops. Great hopes were pinned on this appointment of Rogozin, but only the State Defense Order was either not given to the teeth, or it exhausted all interested and responsible parties. One of the highlights here is the conclusion of contracts for the supply of Borei-class submarines, when only the direct intervention of Vladimir Putin allowed the parties to “understand” each other and put their signatures under the agreement. Only the contract, as it turned out, did not suit either one or the other, as the industrialists asked to throw them another 5% from above, while Anatoly Serdyukov’s department said that this was robbery, and therefore the price should be reduced at least threefold .

It turns out that in the United Shipbuilding Corporation today, Borei is being built, but clearly not impressed with the level of payment for its work. At the same time, the Ministry of Defense allocates money for production, but, in turn, is also gritting his teeth and hoping for a reduction in the total cost, which in itself looks utopian.

In general, all these tensions and omissions in communication between the Ministry of Defense and the manufacturers of military equipment on the state defense order could, as many expected, be decided by the resignation of Minister Serdyukov. And it really looked like the lesser of evils, because few people wanted to dive, as they say, with the head.

Minister, in the end, removed. Whether it is impossible to effectively conclude contracts with manufacturers, or not in connection, this is no longer the case ... But the new minister, who didn’t really have time to get used to the new place, faced the same problems that the previous supreme military apparatus faced departments. It would seem that the strong-willed and highly experienced Sergei Shoigu with his professional environment, in which there are former representatives of the military-industrial sector, should literally put things in order with an iron hand in terms of the implementation of the State Defense Order, using the support of Deputy Prime Minister Rogozin. But it turned out that the matter is much more complicated than anyone from the outside seemed before. Apparently, having studied the estimates for the preparation and creation of modern samples of military equipment, Shoigu took up his head. At a recent meeting of the Government of the Russian Federation, the new Minister of Defense stated that the Ministry could execute the program of the GOZ in monetary terms, but the program would then not be implemented in quantitative terms. “... I'm not talking about quality,” added Sergey Shoigu.

In other words, the price list itself, which is inserted by the manufacturers of military equipment in Russia today, is such that even with the level of funding for army modernization and fleet Until 2020, which is voiced by the highest authorities (23 trillion rubles), it is impossible to buy mathematically as many units of military equipment as troops need. Either it is necessary to reduce the planned amount of equipment for procurement by the state, or to force industrialists to cut prices.

The first is impossible, since then plans to re-equip the army of Russia with 70% in the coming years are completely disrupted. The second is impossible, because no sane industrialist will not work at a loss in a market economy, to which we, it seems, have passed. But did it not happen that the prices that today are designated by production associations for their services in creating military equipment are, to put it mildly, a bit overpriced. Perhaps someone here also sees the option to heat their own hands, lifting the price bars to such limits as to excuse me, I can grab a solid piece? Is it so?
Sergei Shoigu at the same government meeting entered into an almost open dispute with the Minister of Industry and Trade Denis Manturov. The head of the military department wonders on what basis the prices of aviation equipment over the past four years have grown significantly. In particular, Shoigu notes that helicopters in Russia have become more expensive since 2008-2009 by 3-5 times, and planes - by half. Since 2010 cost tanks T-90, taking into account modernization measures, has grown significantly and amounts to about 118 million rubles. With other military equipment, which should be supplied to the troops according to the plans for the implementation of the State Defense Order, the situation is approximately the same. Industrial enterprises raise prices without paying any attention to inflation laws. Indeed, if we take into account that the total inflation over the past four years amounted to no more than 30%, it turns out that a five-fold increase in prices for the same helicopter equipment is an obvious bust, even if we take into account that the inflation rate is an average indicator.

If we consider such impressive prices for Russian equipment, then the explanation of the level of these prices may be as follows. Either there is a force that artificially warms up the financial component of the process of creating military equipment for the needs of the Ministry of Defense, taking advantage of the fact that huge money is allocated for the purchase of such equipment. Or, prices grow objectively for one simple reason: a clear depreciation of the production component, a decrease in production capacity, which themselves need serious modernization. After all, it is not a secret that in many enterprises that position themselves as producers of military equipment of the new generation or modernized equipment, equipment produced during the Khrushchev's “thaw” is used. If for their time these machines were a technical and technological breakthrough (and even then not always), then today they are simply morally obsolete. It would be time to replace them with more modern ones, but there is often not enough money to buy modern ones, and therefore the last juices are squeezed out of the equipment, on which even fathers and grandfathers fulfilled five-year plan plans.

Obviously, the use of a worn-out technical fund leads to higher prices for any products manufactured on its basis. Even if using many of these machines to make colanders and pans, then such dishes will be three times-four times more expensive than products of enterprises that have switched to the use of modern technology. Here, issues of energy saving are important, as well as technological principles of production, and a decrease in the intensity of human labor, leveling of the error factor, and much more. After all, nowhere do they claim that they will “catch up and overtake” modern industrial complexes with the help of an improvised wooden machine inherited from ancestors. And we sometimes say ...

In this connection, the attempts of the Minister of Industry and Trade Denis Manturov to justify themselves in the overpricing of military equipment produced in Russia look somewhat strange. According to him, there is simply nothing left for industrialists, because the profitability of Russian enterprises in the military-industrial complex does not exceed 6-7% on average. They say that this is why Russian enterprises either have to work at a loss, or simply reject those proposals that come from the Ministry of Defense as part of the implementation of the State Defense Order.

On the one hand, the problems of industrialists can be understood. But after all, as often happens, the owners and managers of production, they do not always decide on the modernization of their own enterprises. It is highly undesirable for many industrialists to purchase new equipment that would allow them to perform their tasks faster and with better quality. After all, you don’t always want to invest this profit in the development of enterprises. Much more often, the profits of enterprises are mastered in other ways according to the principle: we use earnings now, and then be that to be ...

Such a difficult situation in the military-industrial sector would help to refresh either the state program for the modernization of production itself, or the attraction of private capital, which, by the way, is practiced in many countries of the world where the military-technical sector is well developed. But both the state program and the attraction of private capital require time, which remains less and less until the end of the announced military reform. It turns out that the same Ministry of Defense will have to either carry out a temporaryуrestructuring of the technical fleet of the army and navy, or continue to butt with manufacturers, figuring out why it is so expensive, and how to buy cheaper.

Sergei Shoigu, realizing that no one would allow him to shift the plans for modernizing the army in time (after all, the timeline directive came from above, and Shoigu does not look like a revolutionary minister), he decided to somehow frighten the industrialists. He said that if no progress was made when reaching agreements on prices with them, the Defense Ministry would simply be forced to buy products from foreign manufacturers. This idea was immediately supported by Prime Minister Medvedev, who said that Russian manufacturers should feel that foreigners breathe in their heads. Like, the only way you can expect a sense. Do you think? ..

With these statements by Sergei Shoigu and Dmitry Medvedev in general, some kind of incident is obtained. After all, in fact, in the Ministry of Defense and the Government they come to what they have recently, sort of left. More precisely, not quite like that: we thought so that we left, but in fact there is no other way out than banging the table with a fist and demanding price cuts from Russian enterprises in the military-industrial complex to fully implement the state defense order.

In this connection, the reaction of industrialists is interesting. If, suddenly, after such an offensive by Shoigu-Medvedev, prices suddenly fall down, it would mean that the matter was all in the banal desire of interested parties in the military-industrial complex to fill their pockets with budget money (as a reserve, as they say). And if there is no noticeable reduction in prices for military equipment, it will mean that the reason lies in the laws of the market, based on the use of technology, materials, and investments. There is no one, no other, no third, but it is necessary to ensure the state defense order, which means that it is necessary to dig the ground at an exorbitant price, remembering in the soul with the “good” words of all ministers by name.