The code of honor does not fit into the new look 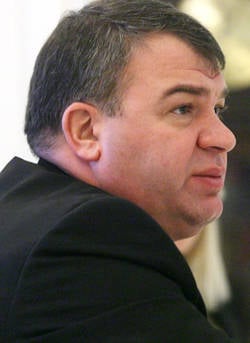 The leadership of the Ministry of Defense of the Russian Federation excluded from its plans the third All-Army meeting of army officers scheduled for November 19 this year and fleet. This was reported by one news agency. “The official paper on the cancellation or postponement of this event to our office has not yet been received by us, but it really isn’t in the plan for November,” the representative of the military department confirmed to NVO. “Agree, in today's situation it would be strange to discuss the formation of corporate ethics of the command staff.” We were not persuaded that the meeting “hung” due to a violent reaction in society to the scandal that happened at the Seltsi training center between Defense Minister Anatoly Serdyukov and Colonel Andrei Krasov, head of the Ryazan Higher Command School of the Airborne Forces, which we wrote about in detail in the past the issue of the newspaper (No. 40 dated October 22–28.10.2010, XNUMX). Throat grabbing and profanity in the communication of the minister himself and the head of the university have already turned the stated topic of the upcoming forum into open mockery. But if only it came down to this ugly skirmish.

Recall that in January 2010, news agencies reported on the completion of the preparation of proposals for the All-Army Conference, which, in accordance with Order No. 866, of the RF Minister of Defense, was scheduled to be held in November. His topic was determined after the military department, at the direction of the state secretary - Deputy Defense Minister Nikolai Pankov, studied the experience of forming officer ethics accumulated in the Strategic Missile Forces, the Space Forces and in one of the main directorates of the General Staff. Before the meeting, it was decided to deploy a broad discussion in the military units and on the ships on the elaboration of a peculiar code of honor for the Russian officer. In close connection with this question, they also planned to discuss the attitude of society and authorities at all levels to the officer corps, the problems of the social and legal protection of this category of servicemen. Indeed, in the military environment, the opinion has long spread that the adoption of a code of honor should strengthen the moral core of the officers and at the same time raise its social status. As they say, strict demands on oneself cannot but arouse respect and support of those around him.

When signing the order to hold the All-Army Conference, the Minister of Defense, of course, was fully acquainted with the ideological plan and the plan for preparing for the forum. But he hardly took it all seriously. The environment in which it is necessary to work now seems to be alien and remains for him; apparently, he is too far from the interests and problems that concern the absolute majority of people in uniform. In another way, probably, could not be. A civilian specialist, professionally sharpened for solving purely financial tasks and having accumulated relevant experience, being among the military (and ex officio over them), continues to focus on the economy. And it does not want or can not see behind the numbers of real people, their fate, and concern. His credo is to reduce the number, disband the military unit or institution, redistribute funds, put up the released property for sale. To make the army compact and efficient ... What is the use of such “abstractions” like officer's honor? For a person who wore epaulets for a year and a half, this is probably an incomprehensible concept.

Although the minister still had to think about such things in recent days. When the incident in Seltsy literally blew up the Runet’s blogosphere, then public organizations of veterans of the Armed Forces made appeals to the president, calling for the resignation of Anatoly Serdyukov. They ask the head of state "to immediately stop the insane and voluntaristic reforms carried out by a group of amateurish aliens to military affairs, who can only destroy, dismember, sell off and destroy what remains of the Armed Forces."

It became obvious that dissatisfaction in society with not fully thought out and verified measures to “impart a new perspective image of the army and navy” had already reached a critical point. Such a complex, but certainly necessary, reform of the Armed Forces of the Russian Federation begins to lose its attractiveness, is perceived by the army as a kind of profanation. So, the State Duma created a commission to check the scandalous case in Seltsy, which served as a detonator for sharp criticism of the head of the military department. A source of "NVO" in the Kremlin confirmed that President Dmitry Medvedev is also up to date and "very concerned about the current situation."

The situation that has arisen around the Russian Armed Forces forced the Ministry of Defense to take vigorous actions to protect reform initiatives. Especially since objectively there has been done a lot of really useful for the army and navy. Finally, four united strategic commands have been created. The intensity of combat training in the army has noticeably increased. Almost all military units have become parts of constant readiness. But for some reason, the Ministry of Defense decided to conduct the defense of their achievements by some strange fire methods.

They organized an emergency meeting of Anatoly Serdyukov with veterans of the Armed Forces, retired military commanders and leaders of the Ministry of Defense of the Russian Federation and the former USSR, members of the so-called paradise group - the Service of Inspectors General. And they promised them that soon a body to work with veterans would be created in the Ministry of Defense. Presumably, the calculation was made on the unconditional readiness of the participants of the meeting, receiving, by the way, besides pensions, also budgetary salaries, to help reduce the critical attitude in the entire veteran movement.

As for the cancellation of the All-Army Conference, it is clear that it is impossible to instill respect for people in uniform to themselves, as well as society to them, if the pay of officers is less than the national average, and the solution of their housing problem is postponed all the time. It was not enough to talk about this and many other issues in full voice at the November forum. Risk is not worth it.