November 28 2012
43
This year, separatists are either winning victory after election in various parts of the world, or are actively making plans for the future.


In the US, active citizens are known to collect signatures on petitions for the withdrawal of many states from the United States. It cannot be said that all the states have gained the number of signatures necessary for the White House to consider the petition, but in the near future Barack Obama will have to answer those two southern states that set records in the number of votes collected - Texas and Louisiana. (At the time of writing this article for the separation of Texas spoke out 117,5 thousand people; for the independence of Louisiana - more than 37 thousand.). 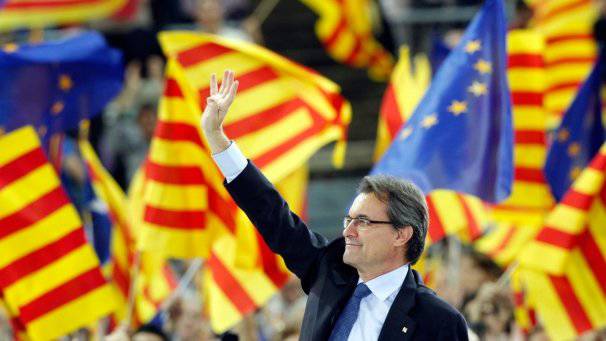 Separatists from Parti Quebecois won the fall election (September 4) in Quebec. This party stands for the separation of the province from Canada. In the past, the party held a referendum on separation issues twice: in 1980 and 1995. On the first plebiscite, 59,6% voted against the secession of Quebec, and on the second - 50,6%. A little more party work, a little more struggle, a little more crisis, and Quebec could become a separate state. True, according to a recent public opinion poll, now only 28% of Quebec people supports the idea of ​​the independence of the province. Nevertheless, the victory of the separatist party says a lot. At least, it was with this ruling party that the Quebecians rushed into their future.

In Belgium, Flemish nationalists after winning local elections in Flanders put forward ultimatum to the government. They demanded the transformation of the country into a confederation. On October 14, the New Flemish Alliance party leader Bart de Wever, who received the 38% of votes in Antwerp, became his burgomaster and actually took control of the country's second largest economic center. The Flemish politician said that with French-speaking Wallonia as part of Belgium he was not on the way:

"We have two cultures and two democracies ... Our nationalism is not a goal, but a means of moving towards our own democracy in Flanders."

In 2014 year held referendum on the independence of Scotland. Only one question will be put to the vote: “Do you want complete independence?” Moreover, British Prime Minister David Cameron and First Minister of Scotland Alex Salmond signed an agreement that would allow all Scots over sixteen years of age to vote. But the young Scots are considered the main supporters of sovereignty. However, for the independence of Scotland today advocates from 30 to 40% of Scots, so it’s premature to talk about sovereignty.

Basque Nationalist Party a month ago won in the elections in the Basque Country: in her new parliament 27 seats from 75 (previously represented by 30 deputies). Its ideology: Basque nationalism and the creation of an independent or, at least, autonomous Basque state.

It should be noted that the two Spanish regions - the Basque Country and Catalonia - in total produce about 25% of the country's GDP and occupy 10% of the territory of Spain.

Catalonia has recently confirmed her desire for separatism.

Here, in the early parliamentary elections, the nationalist coalition “Convergence and Union of Catalonia” won. True, at the same time she lost her former position.

The second place according to the results of the elections was taken by the “Left Republicans of Catalonia” (21 place, 13,6% of local residents). Third place was taken by the Spanish Socialist Workers Party (20 seats; 14,4%).

Arthur Mas, President of Catalonia and leader of the Convergence and Alliance of Catalonia coalition, is not very pleased with the election results: he will now have to unite with other parties to initiate a referendum.

But he has already found with whom to unite. In Catalonia, in addition to his party, there are two more parties that support secession from Spain - the “Left Republicans of Catalonia” (ERC) and the small party “Candidatura de Unidad Popular” (CUP). Together three parties got 55% of seats in the 135 local parliament.

Nevertheless, the idea of ​​separating Catalonia from Spain and turning it into a separate independent state, as well as a new member of the European Union, is very popular here: about half of the population speaks for them.

Opinion of the Catalan majority in an interview with the Voice of Russia recently expressed the mayor of the municipality of San Pedro de Torello Jordi Fabrega:

“According to polls, more than 53% of the population of the province will vote for the independence of Catalonia in the upcoming referendum, that is, this idea enjoys the support of the majority of the population. As soon as the results of the vote become known - and I have no doubt that the Catalans will vote for independence, we will demand independence from the central government. In case Madrid refuses to fulfill the requirements of the Catalans, we intend to seek our independence through international institutions. I want to emphasize that we are going to act exclusively within the framework of democracy, there will be no riots and violence. As for the national currency, we are more inclined to save the euro, as we plan to become a country - a member of the European Union. We intend to create our own ministries of finance and justice, as well as the National Bank and the Tax Administration. By the way, I don’t see any obstacles for Catalonia’s entry into the European Union, considering that we produce, but don’t ask, because 10% of Spain’s GDP is made here. I think the EU needs a prosperous country that will not ask for debt. ”

If Fabrega called the number in 53%, then, according to the October poll "Center d'Estudis d'Opinio", the separation of the region from Spain Support the 44% Catalans, and another 26% sure that Catalonia needs to become a federal state with greater autonomy.

In the autumn in Barcelona, ​​almost a half million people went to a demonstration for Catalan independence. Such high civic activism was not expected not only by the Spanish authorities, but also by the demonstrators.

As for joining the EU, Brussels (everyone knows that there is a crisis in Europe) is in no hurry to accept new members. Catalonia, even if it is safely freed from the “yoke” of Madrid, will have to go through all those accession procedures that Spain has previously undergone. By the way, Madrid can vote against the membership of Catalonia.

At a press conference during the Ibero-American Summit in Cadiz, journalists asked European Commission President Jose Manuel Barroso if any of the territories leaving the EU Member State would have to go through the EU membership procedure again? Correspondent "Voices of Russia" recorded the answer to Barroso:

“The legal situation has not changed since 2004, since no changes have been made to the text of the Lisbon Treaty on this matter. Therefore, I can confirm with absolute certainty that the position of the European Commission on this issue remains the same ”.

As usual, everything will be decided by the economy. Despite the results of the polls, it is unlikely that in the future the Catalans will really be separated from Spain. Rather, it will be about any special rights or privileges, about trying to bargain for a large share of the Spanish budget.

Catalonia contributes to the budget of Spain about 20% of total GDP, and receives in the form of subsidies and payments about 8% of GDP (pays 12-16 billion euros more than it receives). It is this “unfair” alignment that leads to the growth of nationalist sentiment and the popularity of separatism. Meanwhile, almost four fifths of Catalan goods are sold in Spain. The detached Barcelona will be faced with the question: to whom to sell? After all, Madrid will stop letting this product into its territory. So считает José Raga, professor at the Apostle Paul Catholic University of Madrid. A similar conflict occurred in the 2005 year: the Spaniards, angry with the statements of the Catalan nationalists, stopped buying sparkling wines from the local production, and Barcelona lost several million euros.

Arthur Mas does not have answers to such a clear economic question.

Elderly Kiosk Jose Gaya read Sergey Pankratov, a reporter of the Trud newspaper, a lecture on a bright tomorrow:

“Catalonia is bigger than Belgium, and we have more population than in Denmark or Finland. Gross national product more than in the same Denmark. We are a hardworking people, but the Spaniards take everything from us. Tell me why we should feed the same Andalusia, which lives on state subsidies? ”

“A characteristic detail: the lower the interlocutor’s social status, the poorer he is, the more vehemently he proves that in the case of separation he will roll like cheese in butter. But representatives of the middle class - well-paid doctors, lawyers, bank employees - speak evasively about independence. Businessmen, however, are overwhelmingly opposed to divorce. The wine merchant Mariann Laporta says bluntly that if Catalonia disconnects from Spain, his business can be closed. “Where am I with my wine? Every entrepreneur knows how easy it is to lose the market and how difficult it is to get a new one. ”

Catalonia, on the other hand, can win something, but in many ways even lose.

The share of industry in the Catalan economy is higher - on the order of 17% of GDP against 12% in Spain.

In recent years, Catalonia has been hit hard by the explosion of the housing bubble and mortgage lending. Real estate prices fell 38% compared with the peak in June 2007.

The level of debt of Catalonia is currently 22% of GDP - the highest figure among all Spanish regions. When secession, the region would most likely have to assume part of the debt of the central government. In this case, it is unlikely to be destined to enter the EU - according to the Maastricht Treaty, the national debt of the newly entering country should not exceed 60% of GDP, and if Catalonia has to take on part of the Spanish debt, this value can be exceeded.

So, the game is not worth the candle. The new country will not enter the EU quickly, and indeed its chances are slim: Spain will simply veto it. The debt of Catalonia will grow significantly, and the well-being of the Catalans will decrease accordingly. Madrid may block Barcelona goods, and instead of profits, Catalan entrepreneurs will have to count losses. Thus, it is possible to talk about the alleged budget bargaining of the separatists with official Madrid, and not about secession. Another thing is that the results of the referendum, which plans to initiate a coalition "Convergence and Union of Catalonia", and will be a reason for bargaining.