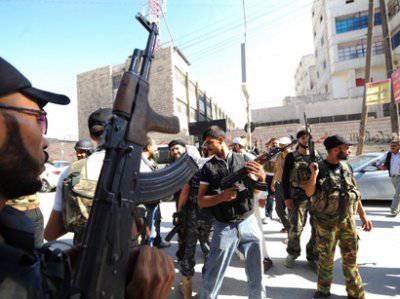 At one time, NATO countries smashed the United Nations and began to “establish a no-fly zone” in Libya on the grounds that the alleged Jamahiriya leader Muammar Al-Gaddafi shot demonstrations in Benghazi. How many cries were there on the topic that, they say, how undemocratic it is that the “dictator” is killing the people and it is necessary to stop him. Then the same “world community” (or rather, those who took upon themselves the right to speak on its behalf) began to shout the same thing about Syria and its president, Bashar Al-Assad. But the so-called "rebels" in these countries in the eyes of Western states and their media look like heroes and "fighters for democracy."

However, the alleged “shootings of demonstrators” in Libya are no longer remembered, because the actions of the victorious insurgents are absolutely real, and they were even felt by the US ambassador to Benghazi before dying. But about the shooting of "peaceful demonstrators" in Syria, no, no, yes, and remember, once again threatening the president of this country, and all of its people. And they pretend that they have no idea that “peaceful demonstrators” in Syria from the very beginning of the standoff already had weapon and let him go, killing soldiers, policemen, smashing state institutions.

But at the same time, the western “public” (more precisely, the usurpers of her voice) prefer to turn a blind eye to the shooting of truly peaceful demonstrations. This is done by those “democratic rebels” in the city of Aleppo. I have repeatedly had to write about it - on different streets and squares of the city, residents come out with anti-terrorist slogans. They require the militants to leave those areas of the city, where those have managed to penetrate. And each time, these "rebels for democracy" respond with fire on the crowd.

And on November 23 the same thing happened again. It was in the quarter of Al Marjah city of Aleppo. A demonstration gathered in which civilians demanded the withdrawal of terrorists from their area. The Fighters for Democracy responded as gangsters respond. A peaceful demonstration was shot. Killed child. Another 10 man, mostly women and children, were injured. There is no one to condemn this shooting of the demonstration - the Western media have gathered water in their mouths, and their owners are going to give the gunners more money - so that even more people will kill.

A few days earlier, gangsters in the same Aleppo fired residential buildings in the Ashfariya area and the Al-Ashfariya trading house with mortars. Only by a miracle no one was injured, but serious material damage was caused.

But the crime is more serious. In the same quarter of Al-Marjah, where the demonstration was shot, the terrorist group massacred. They did not please the family of one citizen - Abdel-Rahman Zhleylyati. 9 man is brutally murdered.

The next day, the surviving relatives and friends of the survivors were buried. But the “democrats” are the “democrats” to prevent the funeral from going humanely. The funeral procession was attacked. The militants opened fire on people and wounded several people.

In the peaceful city of Hasak, the “rebels” are also trying to carry their pseudo-revolutionary “values”. The bomb exploded near the building of the Central Bank. One girl died. Her mother is injured. In the same city, the terrorists damaged the cable and left almost 2 alone without communication thousands of people. And in the province of Hasakah in the village of Al-Shaddadi, a militant who wanted to blow up civilians, suffered a well-deserved punishment - he was blown up on his own bomb. But, unfortunately, he managed to cause material damage to several houses.

And in the city of Deir-ez-Zor, a member of the Union of Arab Writers Muhammad Rashid Ruweili was killed by bandits. The Syrian intelligentsia, cultural figures, scientists, engineers are constantly becoming the target of militants who seek to destroy famous people who have not betrayed their homeland. Here again this martyrology was added ...

On November 19, gangsters fired four mortar shells in the Mezze quarter. They damaged the hospital where they were treating premature babies and the Arab Cultural Center. Apparently, premature babies are also now "enemies of democracy."

On November 20, gunmen fired mortar shells at the building where the editorial office of one of the central Syrian newspapers, Al-Baath, is located. It's so "democratic" - to destroy unwanted editions! See, supporters of free speech!

21 November in the suburb of Damascus Dariey army inflicted good damage to terrorists and freed several dozen women and children, which the "rebels" used as human shields. But aspiring gangsters in impotent rage made pogroms and destroyed many shops. They did not even spare the mosque, in which atrocities were staged and ransacked.

November 22 was again fired from mortars in the Mezze area. An elderly woman was injured, her apartment was destroyed. Another projectile hit the school, in the classroom, where the children were peaceful, a hole was formed.

On the same day two more terrorist acts were committed. A car was blown up in the Barz area, under the bottom of which an explosive device was installed. The owner of the car was lost and the set of cars standing nearby was damaged.

Militants in the Tadamun area killed in cold blood the journalist, Syrian television worker Basel Taufik Yusef. Then, just as calmly, they reported in social networks that “another Assad supporter was eliminated” ...

Is that November 23 was the day without the terrorist attacks in the capital - the militants compensated for this by shooting a demonstration in Aleppo and the separation of "democracy" in Hasaka ...
November 24 - Palestinian Yarmuk refugee camp again suffered. An 4 man was killed in a car bomb blast. Wounded one of the leaders of the camp. This was another act of revenge for the fact that the majority of Palestinian refugees support the legitimate government of Syria and do not want the fraternal Syrian and Palestinian peoples to exterminate each other and force them to kill each other.

On the same day, in the Syrian city of Erich, gangsters began indiscriminately shooting at the vegetable market, where there were a lot of people. One of the women was killed. Hurt her son.

Writers, journalists, demonstrators, refugees and just peaceful people who go to the market or to the mosque, go outside or just sit at home - everyone and everyone can become victims of the brutal "fighters for democracy". Hospital, school, parking - everything interferes with the "rebels", any object can be their target ...

Only the prowess of each and everyone, only the solidarity of the people around the leadership, only loyalty to the Motherland in the hearts of honest people — that can be opposed to this inhuman "democratization."

Syrian Interior Minister Muhammad Al-Shaar talked about this when speaking at the graduation ceremony for future police officers. Let me remind you that Al-Shaar himself only miraculously survived after the monstrous, insidious terrorist act in Damascus on July 18 when many leaders of the army and law enforcement agencies were killed.

Syria is stronger than all the terrorists and conspirators confronting it, he said, more than all those who support the bandits and wish to seize the region’s wealth. The fatherland will definitely emerge from the crisis as a winner and will become even stronger than before. It is only necessary to be worthy of the memory of the heroes-martyrs who gave their lives in the struggle for the Motherland.

Syrian President Bashar Al-Assad received in Iran's capital a distinguished guest from Iran, the head of parliament, Ali Larijani. The President thanked Iran for supporting Syria and for its position against the aggression of the West in the region. In addition to the situation in Syria, the meeting also discussed the issue of the recent barbaric aggression of Israel against the Gaza Strip. Larijani stressed that Bashar Al-Asad, like his father, the distinguished president Hafez Al-Assad, always supported the Palestinians, while others were afraid to say at least one word in support of this people. In particular, for such a position, the enemies are now punishing Syria, trying to strangle her with sanctions and assisting the militants.

Syrian President praised the contribution of Tehran to the establishment of a national dialogue between the Syrians (I remind you - recently a national dialogue conference was held in Iran, in which representatives of the Syrian government and constructive opposition took part). President Bashar Al-Assad said that Syria is committed to the success of the dialogue that has begun, and at the same time will continue to fight terrorism, which is aimed not only against it, but also against the entire Middle Eastern region.

And in one of the villages of the province of Homs, the city administration building was decorated with a huge Syrian state flag. The ceremony was attended by the secretary of the local cell of the Arab Socialist Renaissance Party, community, religious figures and people from the arts.
So let this flag always fly over Syria, not broken by terror, threats or sanctions!